Operators visiting The Big Easy for the FSTEC conference this month can sample more than hurricanes and Creole cooking. New Orleans is experiencing a restaurant boom: As of August, there were more than 1,400 independent eateries in and around the city, compared with 809 in August 2005. That means restaurateurs seeking inspiration, in addition to good food, can look beyond the famed destinations to some newer and lesser-known joints for unusual eats, on-trend drinks and even a few ideas to boost. Here are our picks. 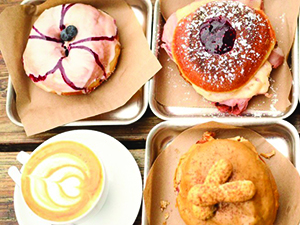 This offshoot of John Besh and Alon Shaya’s acclaimed Domenica took one successful menu element, wood-fired pizza, and grew it into an entirely new concept. The more casual uptown pizza spot takes the original’s wood-fired flavors and expands on them with more options, plus an extensive beer list. For those who can’t break away from the laptop for too long, the pizzeria offers takeout from 11 a.m. to 11 p.m. daily.

Bacchanal, while not new, is a prime example of the eatery-store hybrids popping up in the U.S. This liquor-store-meets-backyard-barbecue-meets-music venue serves guests a seasonal menu of small plates while they enjoy live music on a patio seven nights a week. The lower price points on food and drink carry through to the shop, notable for its wine.

The Avenue Pub made the short list of bars to receive Brasserie Cantillon’s Zwanze, a rare fermented sour beer that’s only released once a year. On Sept. 20, it’ll be one of 22 bars across the U.S. to tap and sell the reserve brew for just one day. To turn the release into a full Zwanze Day event, the bar will sell tickets in advance and pour other sour and specialty beers.

This modernized malt shop in the Garden District sells a changing menu of unusual doughnuts, funky sliders, brewed coffee and more. Lest you see it as a concept crammed with just about every trend, it has some hooks. It's not beer flowing from taps, it's milk. To counter veto votes from those craving the other brew, District sends guests to grab a bottle at a nearby store to bring back in.