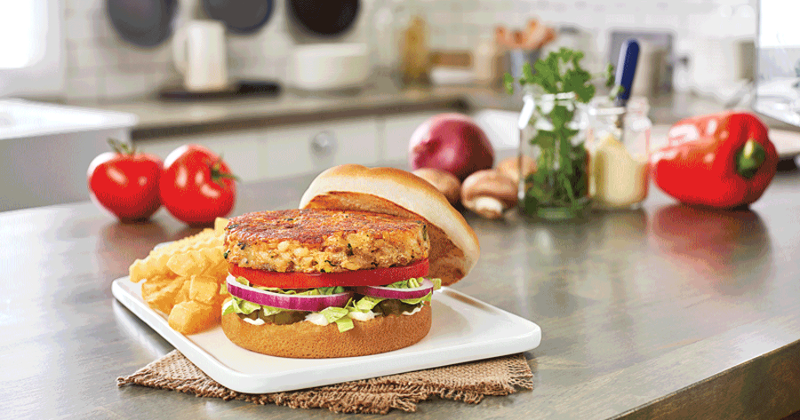 Culver’s started working on creating a signature veggie burger in 2016, before plant-based commercial products exploded on the restaurant scene.

Anyway, Quinn Adkins, Culver’s director of menu development, didn’t want to give customers the same new meat analog patties that other burger chains were offering. “We have a longstanding commitment to our farmers and producers, and we wanted to offer guests the ‘Culver’s experience’ in a veggie burger,” he says.

The Wisconsin-based chain had long offered a legacy vegetarian burger, but Adkins wasn’t satisfied with it and knew he could do better, sourcing real ingredients and improving the texture and appearance.

Sparking the idea and taking it to market

Adkins was presenting a collection of new burger toppers to his team when an idea sparked. “One topper had fire roasted peppers and cheeses and I realized this combination could translate to a veggie burger,” he recalls. He was aiming for a vegetarian burger that incorporated cheese so it would align with Culver’s connection to Wisconsin’s dairy farms.

He began by identifying the vegetables that would provide the right texture, flavor and bite and stand up to Culver’s cooking platforms. “We went through 12 versions before the first market tests,” says Adkins. “Then after that test, we tried three more iterations at selected locations.”

It took one more revision before the burger was ready to roll out to 770 restaurants systemwide Monday. “This was the most extensive testing we’ve ever done on a menu item,” Adkins reports. In total, the burger was market tested for two years.

“We only added one new SKU to create this burger,” says Adkins. “That was very operationally important.”

Storing and handling the veggie patties turned out to be one of the biggest challenges in the creation of the burger.  “The patties absorbed too much moisture under refrigeration after the second or third day,” says Adkins. “That impacted the texture and the burger became too soft during cooking.”

When he changed the composition to firm it up, the burger became too crumbly. Finding the right balance was key, and the final texture allows each restaurant in the system to cook it consistently.

Another challenge was sourcing the vegetables. “Very few suppliers have ready-to-eat IQF vegetables, and that was essential for this product,” says Adkins. In the end, Culver’s brought together a number of vendor partners to supply the various vegetables with a final supplier and the burger assembled at that production facility and shipped frozen to each location.

The cheese was the last challenge to overcome. The high temperature of Culver’s griddles caused the patties to stick during cooking. “We finally landed on a process that was easy to execute with our current equipment,” says Adkins.

The third market test was going on in Tampa during the pandemic, but Culver’s drive-thrus were open and able to conduct it. “We had yard signage in place on the exterior of the restaurants to make customers aware of the new item,” Adkins says. “The pandemic brought a reduction in marketing opportunities but there were no issues in continuing the text.”

Adkins is particularly proud of the burger’s quality of ingredients, flavor and visual appeal. “It aligns with Culver’s overall philosophy of serving real food. And if you’re serving a veggie burger, the vegetables should be front and center,” he believes.