Haracz said on Twitter on Thursday that it was his last day with the Chicago-based company. He told Restaurant Business that he will begin work as a senior corporate chef for Bell Flavors in Northbrook, Ill., where he’ll be working with restaurants and food manufacturers to develop new products.

A McDonald’s representative did not immediately respond to a question about Haracz’s departure.

Haracz was instrumental in developing the chain’s popular Buttermilk Crispy Tenders, which were so popular upon their introduction in 2017 that they had to be briefly pulled from menus because demand outpaced supply. 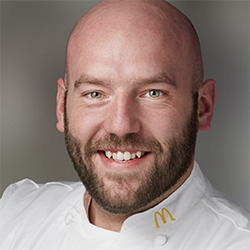 Since then, McDonald’s has expanded that offering with limited-time offers such as Honey BBQ Glazed Tenders as well as a buttermilk crispy chicken sandwich.

Haracz, who has more than 26,000 Twitter followers, is also well-known on social media for bringing back McDonald’s Szechuan Sauce, which had become a cult favorite after it was served by the chain for a limited time in 1998.