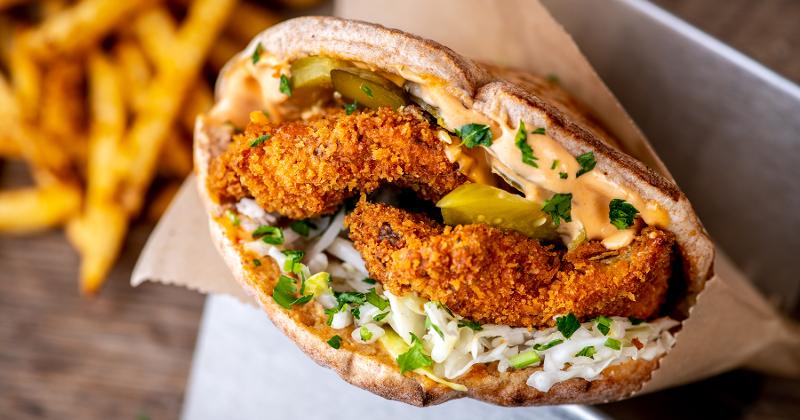 Ran Nussbacher is on a mission to make plant-based eating mainstream. As co-founder of Shouk, an emerging fast casual based in Washington, D.C., he menus vegan versions of fried chicken sandwiches and burgers to appeal to meat eaters. But these items are made with vegetables, not the branded meat analog products proliferating on other menus.

“Nothing comes in as a readymade product,” he says. “We focus on real food, on putting vegetables together thoughtfully.”

Shouk’s fried “chicken” sandwich, for example, is a nod to the current craze gripping the quick-service segment. Like other menu items at the restaurant, it is “a reimagined classic” inspired by Israeli street food. “There’s an Israeli dish called vegetable schnitzel which features mushrooms cut in a certain way,” says Nussbacher “This is similar. We coat oyster mushrooms with seasoned breading, fry them crisp and serve on pita bread with harissa mayonnaise, Israeli pickles and cabbage.” The Fried Shouk’n goes for $11.50, while Shouk’n Nuggets are $5.50.

Rounding out the menu are items such as an eggplant burger, mushroom shawarma, several types of hummus and bowls.

Prices are on the higher end of fast casual, but a lot of work goes into execution, says Nussbacher. “The back-of-house is like a fine-dining restaurant in terms of technique and skill,” he says. There are eight cooks working the kitchen—which is actually in the front-of-house in Shouk’s two locations—and everything is made from scratch, to order.

To carry out his mission to make plant-based eating mainstream. Nussbacher and his co-owner initiated “Hood Drops” when COVID-19 hit. The idea is to bring Shouk’s food to people outside the standard delivery range, into more distant D.C. neighborhoods as well as Northern Virginia and Maryland.

“We place each neighborhood on a daily schedule and residents can order ahead online,” says Nussbacher. Shouk uses self-delivery to bring the orders to a central location, such as a library or town pool, and customers pick up their food curbside. About 20 neighborhoods are on the program and the response has been extremely positive, he adds.

“People see a connection between the pandemic, health and climate change, and see plant-based eating as a way to guard against these,” Nussbacher says.