Customers who seek a meatless dish for reasons of health, ethics or just because it sounds yummy on the menu, are very important people in restaurants today. 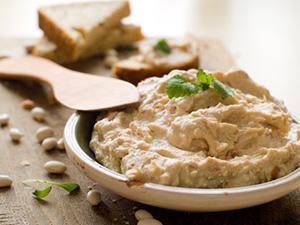 Interest in vegetarian menu options, especially among those who occasionally go veggie, has been rising in recent years. Although only 4 percent of respondents in a 2012 National Harris Poll by the Vegetarian Resource Group said they always eat vegetarian meals and never eat meat, fish or poultry, a sizable 47 percent said they eat at least one vegetarian meal per week.

This has not been lost on the industry. Meatless/vegetarian menu items are a hot trend, according to 57 percent of the chefs who took part in the National Restaurant Association’s What’s Hot 2014 Culinary Forecast. Overall, it is a top-ten trend in the main dish/center of the plate category of the survey.

In fact, there is a small but colorful niche of creative, chef-driven vegetarian cuisine that rises to lofty levels. For example, the hospitality consultants Baum + Whiteman cited the $185-per-person, all-veg menu at Grace in Chicago as an example of the high-end tasting menus they predict will be hot in 2014.

Thus in the same dining room you may find individuals who are devout vegetarians alongside those who are ordering meatless today but may relish a New York strip tomorrow. It is wise to include some trendy and flavorful plant-based dishes on the menu to please all comers. There is ample inspiration to be found in global and regional cuisines that make inventive use of produce, beans, nuts, tofu, herbs and spices.

Demand for the flavors of the Mediterranean Rim is focusing attention on meat-free dishes like hummus and similar bean spreads and dips and garlicky Italian escarole and cannellini beans. Operators may also piggyback on the growing vogue for Mexican and Latin American cuisine with dishes like Cuban black beans and rice, baked bean chili with tofu and kale and spicy ancho bean burritos. Also appealing are regional American favorites spun off with meatless recipes, such as Southern Hoppin’ John and New Orleans red beans and rice.

Increasing interest in gluten-free eating and the carbohydrate-avoiding Paleo diet—the most searched-for diet of 2013 according to Google—has made protein a trendy nutritional component. While protein-packed regimens are often heavy in animal products, operators can invite vegetarians to amp up their protein intake from plant sources such as beans, peas and lentils. They provide high-quality protein along with complex carbohydrates, dietary fiber and many nutrients, plus are gluten-free.