As soon as the rumors hit Wall Street in 2003 that McDonald’s was looking to off-load Donatos, the family-run pizza chain it had acquired four years earlier, Jane Grote Abell, a founding family member and longtime employee, jumped into action. She immediately rallied Jim Grote, her father and Donatos founder: “I said, ‘We’ve got to buy it back. I’ll put a team together. I need you—but really I need your money,” she recalls. Pooling his contribution with her own, Jane was able to bring the company back into the family fold within a few months—a move that solidified her reputation as a closer. 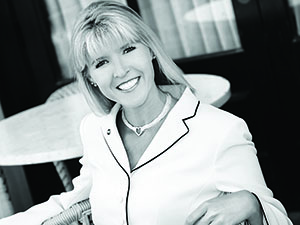 Ask Grote Abell today about those years inside the belly of the burger behemoth and you’ll hear appreciation, not regret. “We had a great experience with McDonalds,” she says. Even as the companies parted ways, “they were a wonderful partner to us in getting the business back.”

Showing compassion, be it for the company that nearly swallowed up her family’s business or for Donatos current 4,500 employees, is something Grote Abell has baked into her leadership style. Ask for her secret to success, and she’ll run through her four Cs: compassion, character, courage and conviction. “When you’re in business, you have to be compassionate,” she says. “Everybody who comes to work has a story. It’s our job as leaders to help them grow emotionally, spiritually, developmentally.”

It’s that compassion that she’s most known for within Donatos. “I don’t think I’ve ever seen somebody who has such a unique combination of compassion and heart and empathy for people, but also has the business IQ and the courage to make difficult decisions,” says Tom Krouse, CEO of Donatos.

Having grown up in the family business, Grote Abell says she didn’t know any other way. “We were truly a mom and pop,” she says of Donatos early years. “When customers came to pick up their pizza, my dad would send them back to [our] house. We would have customers and their kids hanging out until they got their pizzas,” she says. “To have customers in your home builds an emotional connection with the business ,but also with the [guests]. They became like family to us. That was our environment.”

Lest anyone mistake her grace for softness, Grote Abell is not afraid to wield it with dogged resolve. For example, during the McDonald’s days, the decision was made by Donatos new parent to close 23 restaurants in its Atlanta market. Grote Abell, who had spent a chunk of her career heading human resources at Donatos, insisted that the company be upfront with the workers in those stores and do everything in its power to help them find new jobs quickly. “The most important thing was to make sure we were doing it with goodwill,” she says. “At the end of this, the goal was everyone has a job and people are better off.”

At her urging, the company announced news of the closings to the Atlanta employees well in advance, deciding the need outweighed any risk of the news leaking out to the industry. When it came time to close the stores, 32 people from the home office, including Grote Abell, arrived in Atlanta to help do everything from clean restrooms to communicate the news to guests. All of the employees got severance packages, including hourly workers, and Donatos held a job fair to help place its managers with other chains. In the end, “Every single one ended up with a job, and they still got to keep their packages,” Grote Abell says. “What it demonstrated,” Krouse says, “is her belief that you can take away someone’s job, but you don’t have to take away their dignity.”

After the split from McDonald’s, Grote Abell focused her efforts on turning Donatos around. “We bought back a company that was negative in profits,” she says. As chief operating officer, she helped bring in Krouse, who worked with Dave Thomas at Wendy’s, to step into the CEO spot and look at how to grow the business. The key, she says, was once again focusing on the people. “In the first year we had a $10.5 million turnaround. We didn’t change people or products. People started caring about what we were doing again.” She’s quick to clarify that doesn’t mean people didn’t care during the McDonald’s era,  it’s just that “when running a business, there’s a certain culture, and it changed during those times.”

To rebuild morale, Grote Abell dusted of her people skills and hit the road. “All I did for the next four years was spend time in the stores,” she says. You can put memos out and hang posters on walls but it’s more important to show up, she believes. “It sounds cliche, but its true: People don’t care about how much you know, they want to know how much you care.” The benefits trickle down to the bottom line. “Once they care, customers feel it and the community feels it, and it magnifies. We call it shining a light.”

In her current role as chairman, Grote Abell is taking her compassion directly to the community and leading the company’s philanthropic initiatives. One project she’s steering in partnership with Donatos’ original Columbus, Ohio store (still a Top 10 performer) is the renovation of a school on the city’s south side. Donatos made a $1.5 million donation to the project and Grote Abell serves on its board. “The whole goal isn’t about Donatos, it’s about the community,” she says. She continues to work with the CEO to develop new ideas for the company, and she is the face of Donatos in  commericals and in the community. “Having her telling people about what makes us different and better, it’s very authentic,” says Krouse.