Fogo de Chao CEO Larry Johnson will retire at the end of the month, and the company’s current president, Barry McGowan, will take the top spot, the Brazilian steakhouse chain announced Tuesday.

The appointment comes less than a year after the once publicly held Dallas-based chain was purchased by private-equity firm Rhone Capital in a deal valued at $560 million.

Johnson has served as the chain’s CEO for 11 years, growing it from 11 units in the U.S. and Brazil in 2007 to 51 global restaurants today. 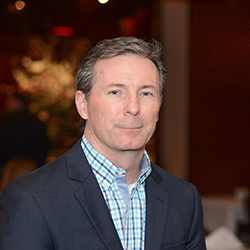 “Larry Johnson is an exceptional leader who has guided Fogo through extraordinary growth from a local Brazilian steakhouse to a world-renowned restaurant brand,” Eytan Tigay, Rhone Capital’s chief investment officer, said in a statement. “In that time, he also developed the foundation for long-term success, building an enduring brand and an outstanding leadership tam that is poised to continue delivering superior performance.”

Johnson said, in a statement, that the “time is right” for a leadership shift at Fogo de Chao.

“Barry’s vast operating experience and deep understanding of Fogo and its people make him the ideal choice to lead Fogo into its next phase of growth,” he said.

Fogo de Chao, which was founded in Brazil in 1979, is known for serving flame-roasted meats that are carved tableside by gaucho chefs.