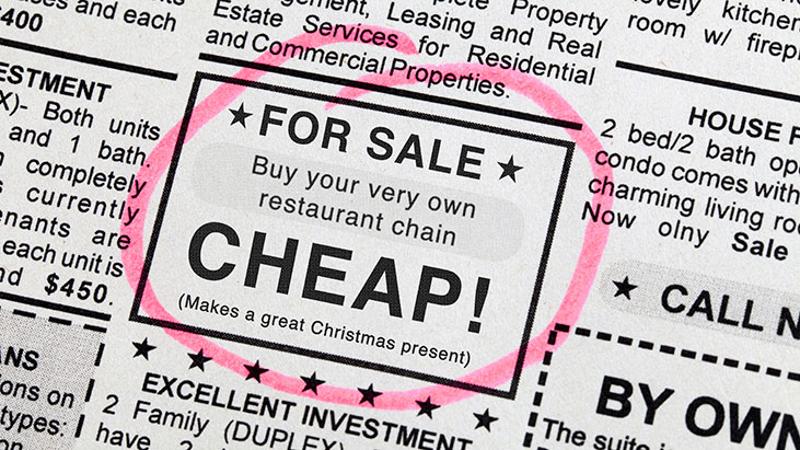 Stumped about what to buy the kids this holiday season? Fret no more! A shakeout of epic proportions has made this the year to get them a distressed restaurant property.

What the heck—go for a whole chain. Either way, there’s no shortage of choices, and you’ll likely have enough left over for a GameStop gift card. For a stretch in September, our daily e-newsletter was reporting restaurant bankruptcies at the rate of one per day. HomeTown Buffet, Ryan’s, Champps, Logan’s, Cosi, Souplantation, Fox & Hound, Don Pablo’s, much of the venerable Black-eyed Pea chain—it could have been a list from 20 years ago of concepts to watch.

And those are the operations hoping to bounce back after a stint in the oxygen tent. Hundreds of places, both independents and chain-affiliated, have soaped the windows and hammered a For Sale sign outside, their run firmly over.

Think about it: Ruby Tuesday alone is 95 units shorter. Cosi is shrinking by a third. The buffet market is smaller by a geometric factor, with six chains jettisoning bad leases and weak branches.

The drama doesn’t end there. Pittsburgh saw the closing this summer of its 28-year-old Spaghetti Warehouse, as close as a restaurant can come to being a civic institution. New Yorkers learned they’ll need another place to take visitors for a two-story-high sandwich; the Carnegie Deli will power down its slicers for good on Dec. 31. We even lost one of the two remaining Howard Johnsons.

The cause is as unmistakable as the smile on bankruptcy lawyers’ faces. Restaurant demand is ebbing faster than a teen’s love of family time. No one is sure exactly why it’s happening, but there’s a consensus on the result: The butts-to-seats ratio has been thrown way out of whack.

That’s why we’re in the camp that regards the carnage as the next best thing to discovering you’re secretly an heir of Warren Buffett. The more capacity that comes out of the market, the better the equilibrium for those players who remain.

That’s not a popular viewpoint. After Darden Restaurants CEO Gene Lee articulated the same assessment during a conference call last month with financial analysts, he was portrayed as a blood-lusting zombie looking to feast on the innards of former competitors.

Yank out a few organs and tuck in a napkin, because a bloody feast is exactly what’ll spare more operations from the bone yard. Yes, we understand that each closed restaurant means an investment gone bust and jobs eliminated. But there’s so much demand for experienced employees that only incompetents are going to suffer. And as for lost dollars, hey, that’s why it’s an investment rather than an annuity.

At this point, with the industry struggling to figure out the cause of its traffic woes, adjusting the supply side of the equation is the only remedy that makes sense. We’re sorry to see so many brands throw in the napkin, but it’s a necessary pain.

Another greybeard of the business asked me recently if I could recall a similar run of devastation in 32 years of covering restaurants. It would have jarred his worldview to agree these days are indeed unprecedented, but in the good they’re doing.