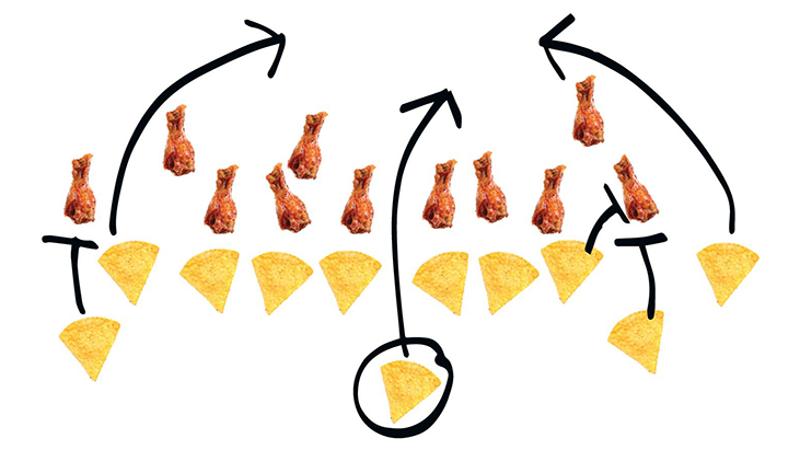 For a sports-centric restaurant, it’s the best of times when the hometown team is crushing a winning streak, and the worst of times when they are just being crushed. But it's not only W's and L's that can have a restaurant reporting a quarterly loss. Buffalo Wild Wings attributed a slow third quarter to an unfortunate NFL schedule that opened a week later. Whatever the cause, the best defense is a solid marketing offense.

For East Coast Wings, based in North Carolina, football and basketball especially are huge for the chain. With a limited local TV advertising budget, the chain capitalizes on cost-effective email and text marketing via its rewards program.

When the going gets slow because teams are losing, the 39-unit chain taps into its more than 120,000 rewards members and sends out free appetizers, $5 giveaways and other incentives to this core group. “It’s not always freebies,” says Tom Scalese, COO of East Coast Wings. “It might just be a little tickler reminding them that we are here.”

It’s about staying relevant, Scalese says. “You’ve got to put things out there, whatever medium that is. It’s just an easy way to touch base with those thousands upon thousands of people. Let them know what’s going on, and if your team isn’t doing well, have some fun with it.”

When the Carolina Panthers lost after a winning streak, the marketing team pounced; it sent an email blast with a chicken wing donning a Carolina jersey with copy that read, “East Coast Wings still thinks you’re perfect.” During slow summer months, the wing has traveled the world—appearing visor-clad on sun-soaked beaches or taking in the sight of Mount Rushmore.

Email marketing isn’t the only play to run. Although sports aren’t everything for 45-unit Buffalo Wings and Rings, it does make a considerable difference in revenues. “When the hometown is winning, for instance when the Bengals are doing well, you see our stores in Cincinnati doing better,” says Nader Masadeh, Buffalo Wings and Rings’ CEO. On the other hand, Masadeh says it’s generally not the home team that will plummet sales, but the lulls between sports seasons. That’s when Buffalo Wings and Rings relies on LTOs.

To stay top-of-mind as a family sports restaurant, Buffalo Wings and Rings will offer a sports-theme LTO celebrating or culminating the beginning and end of seasons. In the fall, the chain offsets lost revenues between sporting events with a ballpark food LTO. Between the Super Bowl and March Madness, it will run another special that pairs different wing sauces with different styles of onion rings.

Besides LTOs, Masadeh recommends finding a year-round marketing mix that doesn’t solely center on sports but doesn’t neglect the fans. “Try to find that balance between the two that not only makes you good at what you do and what you are known for, but also caters to a bit of a wider audience that will weather the storm,” Masadeh says.

Tilted Kilt works the local angle to pad itself against sports-inflicted losses. Logan Reeves, Tilted Kilt’s vice president of operations, says even if your hometown might not be a champion, reach out to alumni in the area for a tailgate, offer to fly their flag, broadcast the game or organize a social. “When there’s not a sporting event, we try to create events to keep that revenue flowing,” Reeves says.

Reeves says positioning itself as an events and entertainment operation instead of solely a sports bar has created opportunities for Tilted Kilt. His goal is to plan a celebration or event for every day.

“Our biggest day of the year is St. Patrick’s Day versus the Super Bowl,” he says. “When there’s events happening, business is happening.”

When the hometown is winning, for instance when the Bengals are doing well, you see our stores in Cincinnati doing better,” says Nader Masadeh, CEO of Buffalo Wings and Rings.

That's a lot of chicken wings

Pounds of nuts eaten that weekend. If all those nuts were peanuts, it would be enough to fill 1.8 million 12-ounce jars of peanut butter.

Super Bowl Sunday is the busiest day of the year for  pizza restaurants.