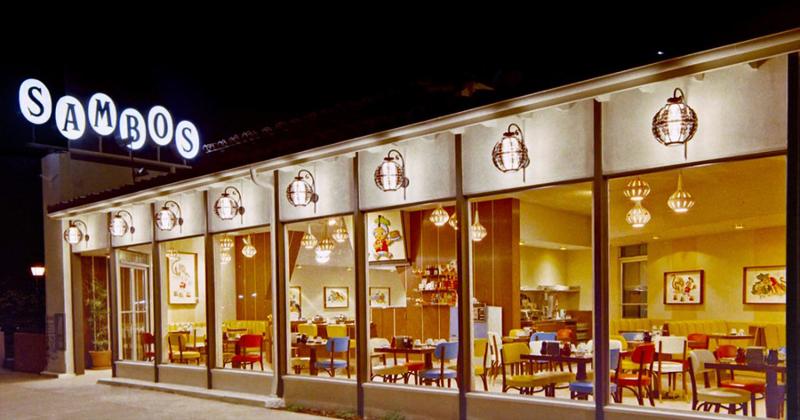 Sambo’s, the family restaurant chain that once had more than 1,100 units in 47 states, is down to one remaining location. And, it will finally ditch its name, a name steeped in racist stereotypes, the owners announced late last week.

The restaurant in Santa Barbara, Calif., the chain’s original store, has not chosen a new name yet, but it has covered over the letters on its sign with the symbols for “peace” and “and,” as well as the word “LOVE.”

“Our family has looked into our hearts and realize that we must be sensitive when others whom we respect make a strong appeal,” the restaurant’s owners wrote on Facebook. “So, today we stand in solidarity with those seeking change and doing our part as best we can … Also, please know we do not tolerate racism or violence. We are committed to being part of a long-term solution. And we ask our customers and neighbors to join us in that pledge.”

The name change comes amid widespread protests around the nation following the death of George Floyd, a black man, after a Minneapolis police officer held a knee on his neck for nearly nine minutes.

The restaurant’s name was a portmanteau of its founders’ names—Sam Battistone Sr. and Newell Bohnett, who started the concept in 1957. But it is also a racist caricature of black people, frequently employed as a defense for slavery and segregation.

During its most successful years in the mid-to-late 1970s, Sambo’s played up its name and its connection to the racist and controversial children’s book “The Story of Little Black Sambo.” The restaurants original mascot was a dark-skinned South Indian boy, like the book’s main character. (It eventually switched to a tiger mascot.) Locations were decorated in murals inspired by the tale. The menu included dishes named after other figures in the book.

By 1976, the Sambo’s chain was doing $380 million in sales—equal to $1.6 billion in today’s dollars, according to a history of the brand from The Daily Beast.

As the chain expanded east in the 1970s, though, concerns grew about its name. Organizations filed lawsuits over the Sambo’s name. The chain faced a number of internal difficulties, unrelated to the name, and by 1982 had sold most of its units and filed for bankruptcy protection.