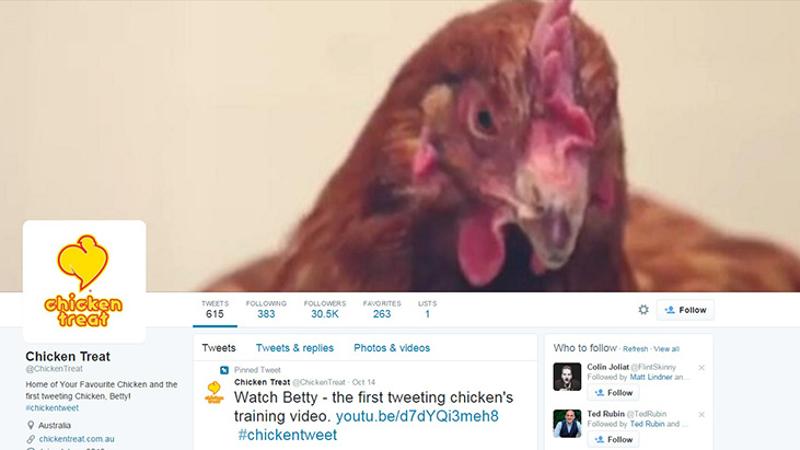 Step aside, Larry—there’s a new Twitter bird in town. And she’s one tech-savvy chicken.

An Australian QSR has come up with a new way to generate buzz on social media—employ an animal. Chicken Treat, a 70-unit barbecue-chicken chain, last week handed over its Twitter account to Betty, its real, live chicken in residence.

Though a clear publicity ploy, the chain says it also aims for Betty to become the first chicken to tweet a five-letter English word, thus securing a Guinness World Record in her furiously typing talon.

However, it seems the Chicken Treat team has a way to go before that dream turns into reality, as most of Betty’s tweets look something like this:

Close call! We thought we were going to have to get Betty exorcised. pic.twitter.com/S3PJEwzELa

Each post includes the hashtag #ChickenTweet, allowing curious consumers to find past tweets by Betty and analyze how close she’s come to Guinness success. The campaign incorporates occasional footage of Betty’s coop via Periscope and a handful of YouTube videos introducing Betty to her fans.

The bit is reaping benefits for the chain, garnering a great deal of media coverage and boosting the chain’s number of Twitter followers to more than 19,000 (it previously had around 700, according to Digiday).

BuzzFeed even secured an interview with Betty, seeking insight from the chicken who last week captivated the Internet.

Even if she fails to take home the title, Betty’s time on Twitter wasn’t for nothing. Before she heads off into eventual web obscurity, she left the world with some parting inspiration:

Some words of inspiration from Betty. And remember: if a chicken can tweet, you can do stuff too. #ChickenTweetpic.twitter.com/fHX2t14R74

Novelty: 10
Enlisting a bird as a third-party tweeter appears to be an industry first.

Imitate-ability: 4
With poultry at a premium, it’s likely not the time to solicit some to join your social media staff.

Social media watch is a new feature that highlights an outstanding use of social media in the prior week. The objective is to show how operators are wielding that form of marketing to build brand awareness, motivate customers or strengthen a concept’s personality. If you have a social media effort you’d like us to consider, please send the idea to knash@winsightmedia.com.