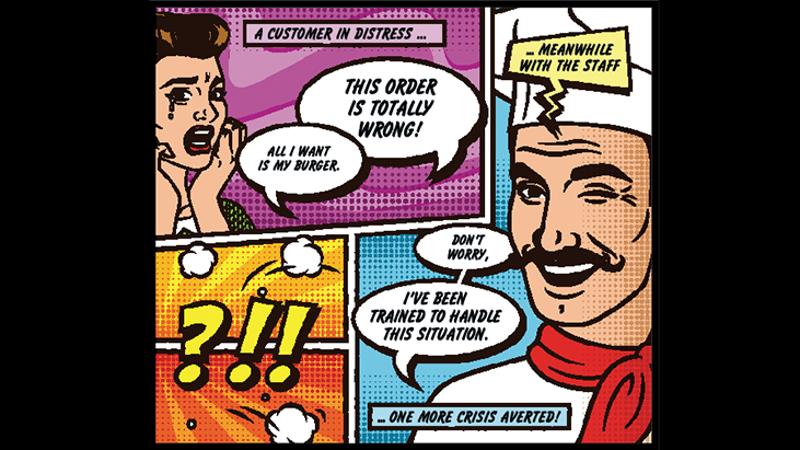 Complaints are relatively unavoidable in restaurants. But how operators—and their staff—handle issues often dictates consumers’ brand perception, as well as their willingness to return. According to a report from the Center for the Study of Social Policy, research not only supports the importance of making it easy for customers to complain, but shows that resolving problems on the first contact is ideal.

Popeyes recognized a need for change in its policies in order to better serve and retain its guests. It initially created a Service Basics 1.0 program, training to boost the accuracy of food preparation and improve service fundamentals for front-of-house staff and managers. “Service Basics 1.0 drove our ‘Voice of the Guest’ score up by five points,” says Dick Lynch, the company’s chief brand officer. But thousands of guest surveys revealed one issue: Fewer guest problems were getting solved at the restaurant, or even after the visit via the call center.

So this summer, the chicken chain rolled out Service Basics 2.0. The difference? It empowers crew members to assist and resolve guest problems without needing to engage a manager. “Before, they had to get their manager if they wanted to say ‘yes’ to a customer,” says Lynch. “Now, they only engage manager approval to say ‘no.’ That’s a huge philosophical shift, and we’re finding it to be very powerful.”

Staffers then went through intensive learning events this summer, says Lynch. “The goal was to teach the hard training skills, as well as the soft skills, such as communication and understanding the guest perspective,” he says. While he declined to give details on specific modules, staff learned to better engage guests and take responsibility for the experience—including resolving issues on their own. Employees now can say, “Have another side; I’m so sorry.” The training is systemwide to ensure the guest-facing employee has the active support of the kitchen, as well as management and the franchisee.

The training also included call center employees. Previously, complaints to the call center were routed to the franchisee and manager, or the company for its stores, which would then follow up. Company stores and some franchisees would act accordingly, but it wasn’t happening across the board. The call center now has the freedom to compensate guests through a tier system, where certain types of problems are limited to specific resolutions to keep it manageable.

The payoff has been evident for the chain. Popeyes found that “meaningfully resolved” guest issues, either in the restaurant or through the call center, result in a 75% guest return rate.