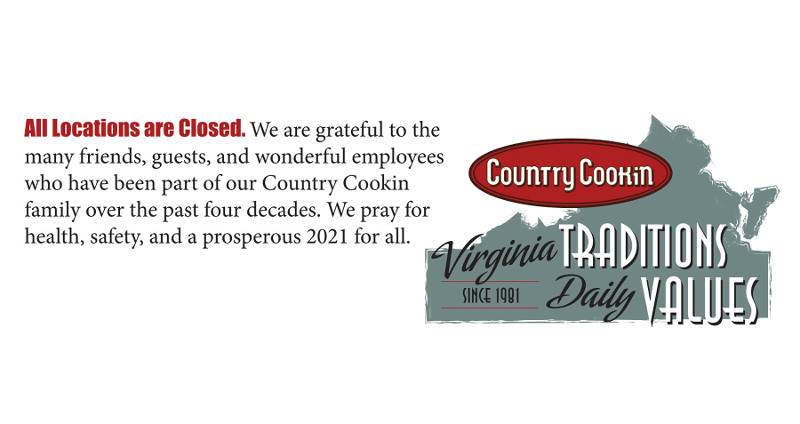 Country Cookin, a 13-unit buffet chain that opened in 1981, has permanently closed all of its locations, the restaurant announced on social media.

The chain, which is based in Roanoke, Va., shuttered its restaurants on Sunday.

“We are grateful to the many friends, guests and wonderful employees who have been part of our Country Cookin family over the past four decades,” the company posted on Facebook. “We pray for health, safety and a prosperous 2021 for all.”

Before it closed, Country Cookin was offering dine-in, takeout and curbside pickup. The off-premise menu featured single meals and family packs. The chain had reopened its salad bars, requiring all diners to wear disposable gloves before serving themselves.

Country Cookin closed for two months at the beginning of the pandemic and laid off hundreds of employees, according to local media reports.

The chain permanently closed two units in September, telling customers on Facebook the decision was made to “enable as many Country Cookin restaurants as possible to remain when the pandemic ends.”

The restaurant noted on social media that its food costs and other operational expenses had skyrocketed since March and that the chain tried to keep its prices low for diners.

Country Cookin was founded by Roger Smith, who started Steer House Restaurants in 1972. Smith grew that concept to a multistate chain before selling it in 1979. Those restaurants faltered, according to Country Cookin’s website, so Smith bought back the Virginia locations and reopened them as Country Cookin in 1981.

The chain continued to grow after Smith’s death in 1988, following its guiding principles of “treat people right, keep the price point low, and serve all-you-can-eat portions of good country food.”

The concept generated a loyal following over its four decades, as evidenced by the hundreds of heartfelt comments customers and former employees left on its social media following the closure announcement.

“My Grandma passed away the other year and this was the only place we would ever go out to eat,” one fan wrote. “We sat in the same booth every time. I loved coming here when I was feeling sad and missing her because it reminded me of her and made me feel better. I am so sad about this.”