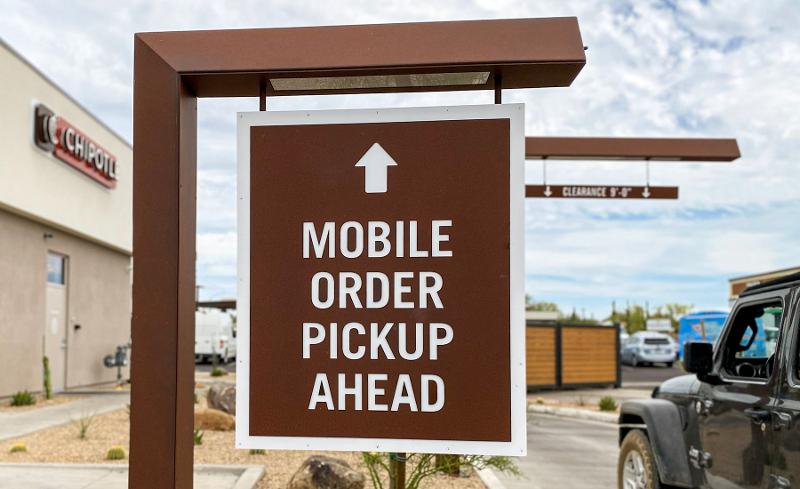 Chipotle Mexican Grill continues to double down on its high-margin Chipotlanes, announcing Wednesday it will open its 100th drive-thru pick-up lane later this month and hire as many as 10,000 new workers in the coming months to support its rapid growth.

In February 2019, the fast-casual chain had just 10 of the innovative drive-thrus systemwide.

But the Newport Beach, Calif.-based brand quickly realized their effectiveness and ramped up Chipotlane rollouts.

“The digital experience has just exploded with COVID,” Boatwright said. “And, that business has been really sticky.”

In Q1 2020, Chipotle’s digital sales grew more than 80% year-over-year, the company said. And of the 19 new restaurants that opened during that quarter, 11 featured Chipotlanes. That is close to the company’s stated goal of outfitting 60% of stores with drive-thrus.

A year from now, Boatwright said he expects Chipotle to have opened 150 new restaurants, with 80 to 100 featuring Chipotlanes.

“We’ve accelerated our plans, our deals for 2021 and 2022,” he said. “We were going to see some contraction in some brands. And you’ll also see brands that are apprehensive to go full-bore into development strategy because of the unknown. As we lean into that scenario, I see greater opportunity as we think about the years ahead.”

In April, Chipotle reported that it had no debt and $900 million in cash on hand, setting it up to acquire real estate made available by recently shuttered restaurants and retail establishments.

Boatwright, who came to Chipotle after a long stint with Arby’s, said the burrito chain leveraged its QSR background when iterating its drive-thru. (CEO Brian Niccol, of course, came to the company by way of the top spot at Taco Bell.)

Since Chipotlanes were first introduced, the chain has used its QSR know-how to “refine the window experience,” Boatwright said.

“What equipment do I need near the window?” he said. “What adjacencies do I need overall? Tailoring that experience on what the transaction would look like, being brief and responsive to the guest. We’ve tweaked and made some modifications on how we deliver that experience more fully … We’re going to continue to evolve.”

A trip through the Chipotlane takes “literally seconds,” he said.

“You pull to the window and they should hand you the bag and you drive away,” he said.

Typically, orders are prepared five minutes early, just in case. And there are two parking spots available in case someone shows up and an order isn’t ready, he said.

If a customer tries to order directly at a Chipotlane, workers teach them how to use the app, as long as there isn’t a line behind them, he said.

The company has purchased multiple reusable masks for every employee at “quite an added expense early on,” he said. Dining room stewards, who’ve been redeployed from other areas of the stores, are responsible for ensuring frequent sanitation of high-touch areas.

Digital operations, including the second makeline and Chipotle operations, are separated from each restaurant’s central kitchen, aiding in social distancing, he said.

Just as the chain is taking advantage of real estate that becomes available amid the pandemic, it is doing the same with hiring. Since May, Chipotle has brought on about 8,000 new workers, with plans to add some 2,000 more in the coming months, he said.

“The talent crisis over the last two years has been tougher than I’ve ever seen it,” Boatwright said. “When COVID hit, we saw a strong opportunity. We are seeing some of our lowest turnover numbers.”

A full suite of employee benefits, including crisis-assistance pay, bonuses, mental health offerings and English as a second language classes have contributed to Chipotle’s hiring success, he said.