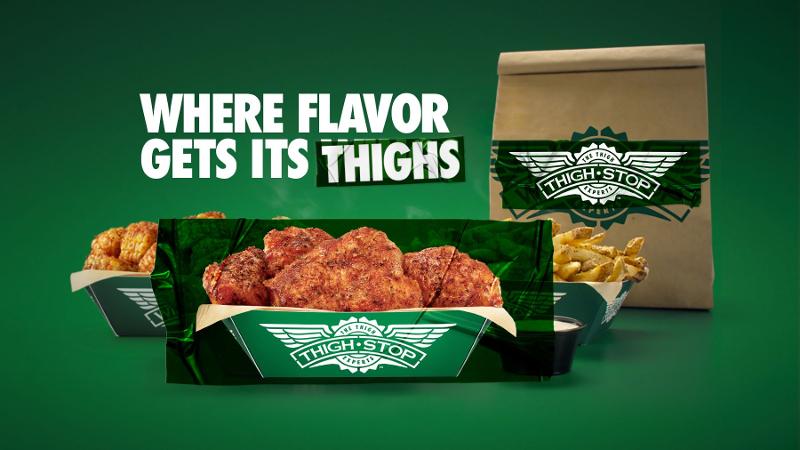 Anyone hoping for a detailed financial breakdown of Wingstop’s new virtual thigh concept, Thighstop, during the chain’s earnings discussion Wednesday might be disappointed.

But Wingstop, which reported same-store sales growth of 2.1% for the quarter ended June 26, did drop some tea leaves about its thigh concept.

Wingstop debuted Thighstop just over a month ago as a virtual brand selling bone-in and boneless chicken thighs tossed in the same signature sauces available through the wing brand.

In the first week of Thighstop’s existence, it garnered more than four billion media impressions around the world.

“We had a huge splash when we launched this,” Wingstop CEO Charlie Morrison said. “It generated a lot of traction. I think it’s going to build.”

Wingstop told franchisees they wouldn’t have to pay any royalties on the first $100 million in Thighstop sales, the chain said, declining to detail how many thighs had been sold so far.

“We don’t disclose sales of individual product/protein and Thighstop would fall into this bucket,” a chain spokesperson told Restaurant Business.

Wingstop did report a bump in its average unit volumes for Q2, to $1.6 million up from $1.4 million a year ago—but it would likely be too soon to notice any significant Thighstop impact.

Adding the virtual brand, though, helps Wingstop on several fronts.

The Dallas-based fast casual, which has a goal of digitizing all of its transactions, reported Wednesday that digital sales increased to 64.5% of all sales, up from 63.7% the year before. Incentivizing diners to try a digital-only brand with a new, exclusive product is one way to get them to order through that channel.

The chain noted that Thighstop’s offerings will be folded into Wingstop’s menu during the second half of the year.

The creation of Thighstop also represents a solid proving ground that Wingstop can create virtual brands, Morrison said. Currently, only a couple hundred Wingstop locations have reopened their dining rooms amid ongoing labor challenges and issues related to the pandemic. Wingstop has watched as other chains created virtual brands and wanted to be able to say, “We can do that, too,” Morrison said. “Wingstop is a great virtual brand concept.”

Perhaps the larger issue for the chain is mitigating the high price of chicken wings. The price of bone-in wings is up about 125% year over year, CFO Michael Skipworth told analysts, though Wingstop is paying about 65% above last year’s prices because of its relationships with suppliers.

“(Thighstop) definitely has a real benefit from a cost perspective because it helps us achieve our goal of utilizing more of the chicken, which is critically important to our long-term strategy,” Morrison said. “The key to Thighstop is every order is beneficial to our long-term strategy for our supply chain and making sure we focus on the whole bird. We’re very pleased. It’s in line with where we expected the product to be.”