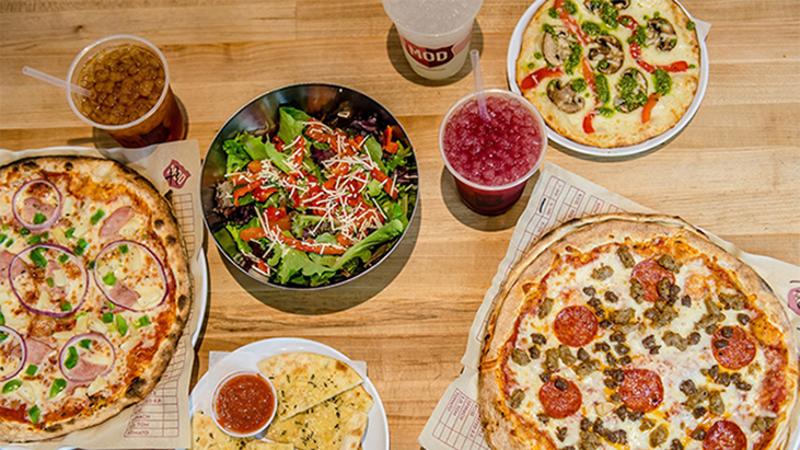 A 220.5% leap in systemwide sales on a 100% increase in units earned Mod Pizza the 2017 Pacesetter Award, an honor bestowed on the emerging chain that did the most outstanding job in the last year of realizing its growth potential.

The annual award is presented by Restaurant Business in partnership with Hormel to a chain that once earned a berth on the Future 50, an elite yearly ranking of brands by systemwide sales growth. The ranking is limited to concepts with sales falling between $25 million and $50 million, as determined by Technomic, the magazine’s research sister. Mod made the list in 2015 and has since burst through the $50-million-a-year sales barrier.

The 2017 award was presented Tuesday at the Restaurant Leadership Conference, a gathering of the industry’s top chain executives and franchisees. The award was presented by Winsight’s Foodservice Content Group Director Kelly Killian to Mod CFO Bob Barton and VP of Partnerships John Dikos.

Barton stressed that Mod remains a growth chain, with stores opening at a head-turning rate. “Regardless of the speed of store counts, embedded in the culture is getting better every single day,” he said.

MOD was selected from among the hundreds of chains that have graduated from RB’s Future 50 list. The fast-casual concept features customized pizzas cooked in an 800-degree oven. Patrons can also opt for a salad that’s tossed to their specifications. Customers are not charged extra for the toppings.

MOD (an acronym that stands for "made on demand") was founded in 2008 by Scott and Ally Svenson, the husband-and-wife team that formerly founded Seattle Coffee Co., a United Kingdom operation that was subsequently sold to Starbucks. Scott Svenson served after the sale as president of Starbucks’ European operations.

Scott serves today as CEO of MOD, and Ally holds the title of VP of brand.

Last year’s winner was the Which Wich fast-casual sandwich chain.