It’s not an accident that Pie Five—which has had some stumbles in recent years—is calling its new prototype Goldilocks. The Rave Restaurant Group brand, which is almost entirely franchisee-run, is hoping the revamp will be the just-right solution to combat rising real estate costs, labor pressures and a changing consumer who prefers pizza on the couch to dine-in.

Plus, “I have a tendency to put corny names on projects,” says Brett Heinen, the chain’s VP of franchise development. “It makes me laugh on earnings calls.”

The 73-unit fast-casual pizza concept based in The Colony, Texas, has seen same-store sales decline in recent quarters and has closed nearly a dozen stores in the past year. But Pie Five executives are hopeful that a new prototype, parts of which rolled out last fall at a Garden City, Kan., store, will boost efficiency, drive sales and make the concept attractive to franchisees.

“The whole premise is right size, right fit for the right location,” says Tim Breen, Pie Five’s VP of operations. “It’s flexible, whether it’s a convenience store or a football arena, an airport or a streetside location. It can morph to fit anything.”

To allow for that flexibility, the brand first had to revamp its menu. Pie Five recently expanded its menu to add several new crusts as well as 14-inch shareable pies. Those are gone at Goldilocks shops, where only 9-inch pizzas are available, with a reduced number of toppings and crust options. All of the different crusts were creating guest confusion, Heinen says. Cutting the options speeds ordering time as well as prep and make time. 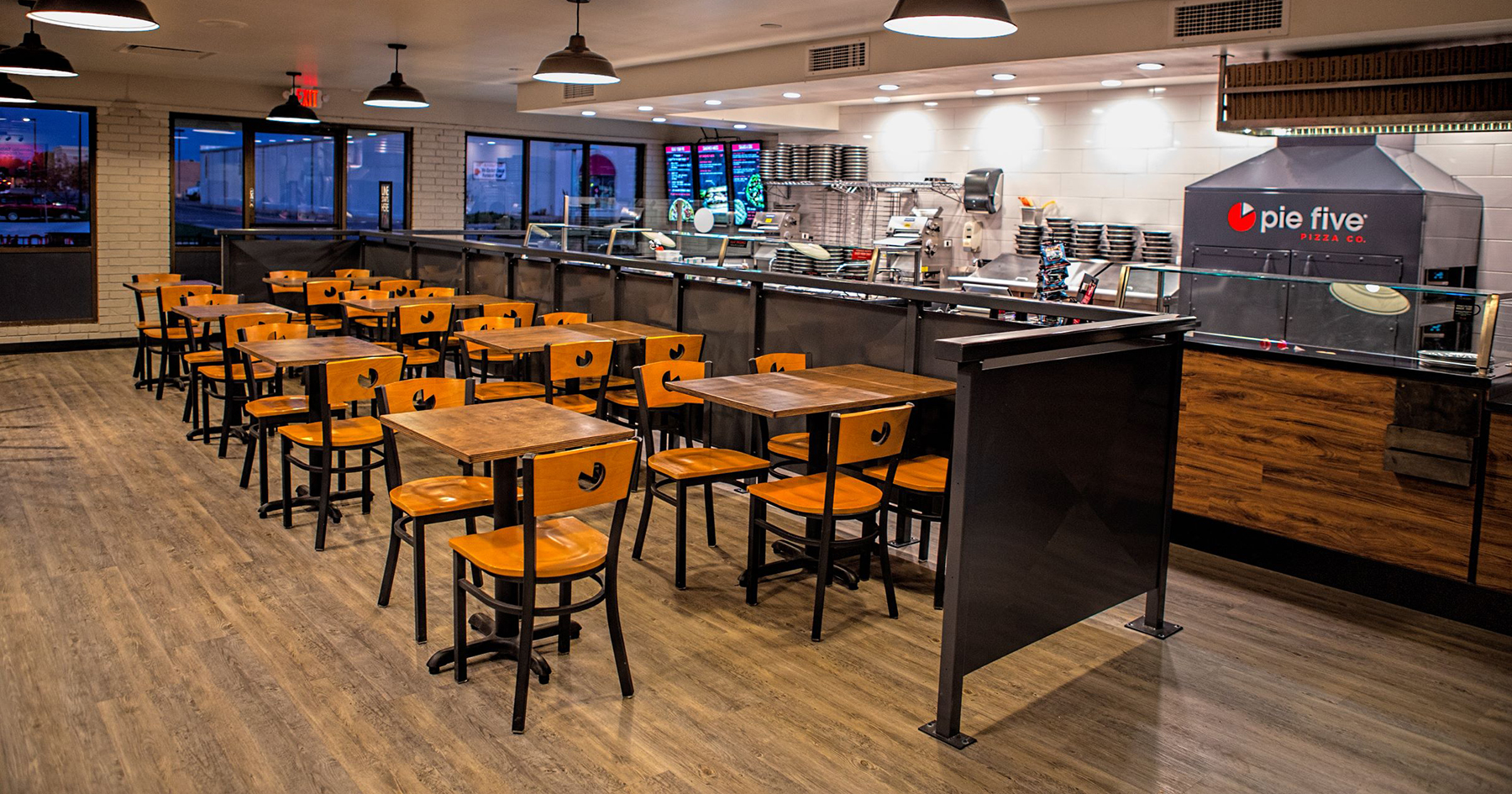 Some existing Pie Five units are up to 2,500 square feet with as many as 80 seats. The new Goldilocks unit in Garden City stands at about 1,800 square feet with 50 seats, but the prototype can be scaled up or down depending on location. The kitchen has been streamlined, moving the pizza oven from the back wall to the front of the line, a shift that can increase throughput by 10 to 15 seconds per pie, Breen says. “It’s really a lot when you’re talking about speed of service.” Plus, the Goldilocks units are outfitted with make tables that are nearly 2 feet shorter than the older tables. Shorter tables mean more efficiency and less traveling for pizza makers.

Though not in the Garden City unit, the Goldilocks prototype calls for make tables to be outfitted with customer-facing grab-and-go units to prompt impulse buys of salads, desserts and drinks. The quick-grab merchandising also allows customers to bypass the pizza line entirely to pick up lunch in a rush. The grab-and-go display began at Pie Five’s airport locations and were so successful they’ve been added to the new prototype, Breen says.