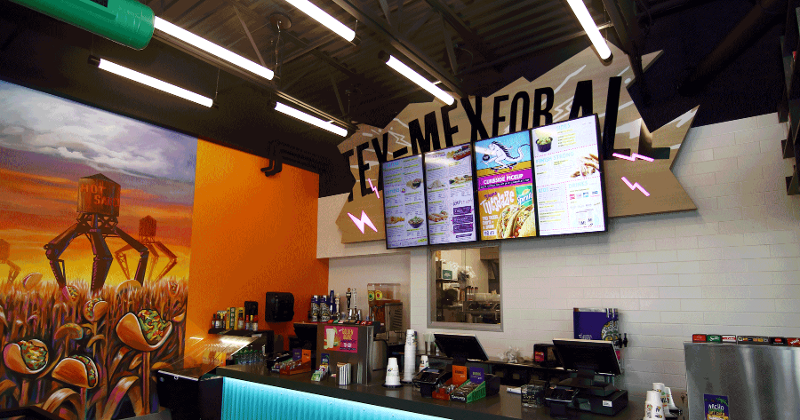 Fast-casual Tex-Mex chain Tijuana Flats is debuting a new prototype. But it’s not going the route of many restaurants amid the pandemic and doing away with its dining rooms.

“COVID will have an end and we anticipate getting back,” Eric Taylor, the chain’s vice president of development, said. “We are building new prototypes with a similar amount of seats. For us, it just wouldn’t work.”

The first of the new designs, which opened late last year in Noblesville, Ind., includes 64 seats indoors, plus a patio. But it has been reimagined to boost efficiency through new design and technology, Taylor said.

The chain plans to open at least four of the new prototypes this year, both franchised and company-owned, as well as remodeling a handful of the brand’s 105 locations.

The kitchen has been redesigned into a horseshoe layout, engineered to minimize the steps workers need to take to fulfill orders, he said.

Tijuana Flats has “never had a real tech package,” he said, noting that the new design features digital menu boards, as well as a pickup area with digital status boards.

None of the chain’s locations include drive-thrus, he said, but the chain is exploring mobile-order pickup windows at a couple of restaurants.

“All the food is made fresh so the drive-thru model wouldn’t work for us,” he said.

Three years ago, just 19% of Tijuana Flats’ sales were off-premise. Now, about 70% of orders are for to-go or delivery, he said.

But Taylor expects dine-in to bounce back, post-COVID.

“On Taco Tuesday, we have a line around the building, and we have to have seats,” he said.

The 25-year-old chain is getting back into franchising after a 13-year pause. It is also debuting its first locations in sports venues. Last year, the chain completed three franchising deals, for a total of nine units.