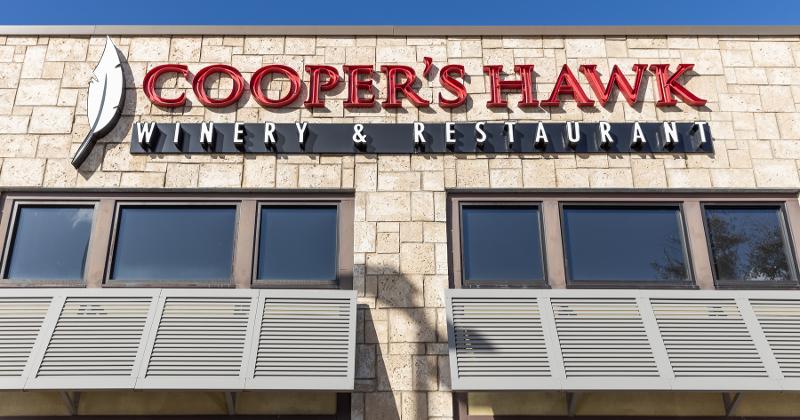 Cooper’s Hawk is tapping some big names as it prepares to expand its portfolio of concepts.

The Chicago-based upscale casual chain on Thursday said it plans to open a pair of new restaurants in Chicago that will represent an extension of the Cooper’s Hawk brand.

The company in the spring, for instance, will open “Esquire by Cooper’s Hawk” in Chicago’s Gold Coast neighborhood. The restaurant will feature a “Chef-in-Residence” series, with notable chefs, some of whom are new to the Chicago area, providing a quarterly menu that “explores the long and celebrated relationship between food and wine.”

Tom Colicchio will kick off the restaurant, followed by Carla Hall in mid-summer. The company said Esquire will feature “reimagined versions” of Cooper’s Hawk favorites, as well as menu pairings and happy-hour tastings from a collection of 3,000 bottles of wines, curated by Cooper’s Hawk Master Sommelier, Emily Wines.

Meanwhile, Cooper’s Hawk also plans to open a Neapolitan pizza restaurant in Oakbrook, Ill., in the first half of the year, called Piccolo Buco by Cooper’s Hawk. The restaurant will feature Roman-style dishes and ingredients sourced from Italy.

Cooper’s Hawk worked on the concept with Luca Issa, owner of Piccolo Buco in Rome, to develop the concept.

The idea is to build what Cooper’s Hawk calls a “hospitality ecosystem with a lifestyle mindset.”

“The ‘by Cooper’s Hawk’ model is designed to provide both wine club members and guests access to exceptional wine and culinary experiences,” Founder and CEO Tim McEnery said in a statement. Wine club members will have exclusive access to a suite of benefits with the restaurants, including rewards, wine pick-up and special tasting experiences.

Cooper’s Hawk operates more than 50 locations and its wine club is one of the world’s biggest.