Apple Pay. Tap-and-Go. PayPal. EMV. In the ever-evolving world of payment, restaurants are being forced to reevaluate their POS systems and potentially spend large sums to upgrade with the times. While mobile pay gets a lot of press, the real driver behind the need to modernize is the October 2015 deadline to integrate chip-and-pin credit-card readers, in advance of an impending shift in fraud liability from card issuers to retailers and restaurants. 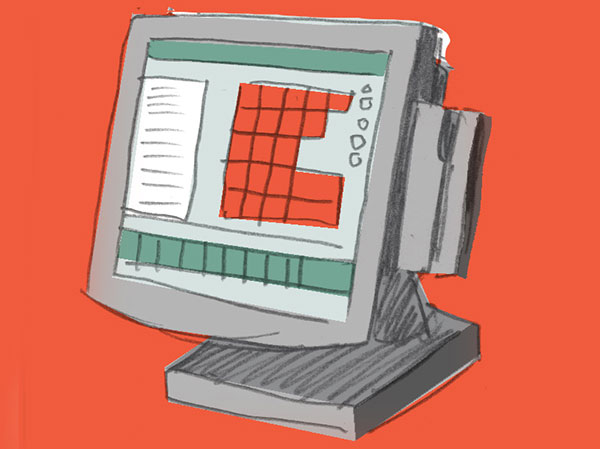 That’s not to say that contactless payments aren’t important. Operators admit, while the number of customers using e-wallets is low, it’s still a consideration (and increasingly so) when looking at POS solutions. “You might lose business if you don’t accept [a customer’s] preferred payment,” says Adam Scott, CFO and co-founder of Atlanta-based Wing Zone. It’s not only a matter of choosing some new equipment. Today, just as essential is whether to rent or buy and when to pull the trigger. Here, lessons from three operators.

Pros
“Compared to traditional systems, it’s pennies to the dollar for a tablet,” says Hemant Phul, owner of Barca, a New York City tapas restaurant. He manages ordering and payment on four iPads (models  range from $249 to $829), run on an app. Updating software as technology advances and bugs are fixed is easy, says Phul; just a simple download. And his young staff has been quick on the uptake, because they “already know how to navigate [the iPads] from self use.”

Cons
Vulnerability. Tablets are less bulky than traditional POS monitors, so theft and breakage are concerns. But that and cost also mean they’re easier to replace.
Connectivity. Without a local system as backup, tablets can stop working when a cloud connection is lost,  forcing an operation to revert to paper and pen.
Untested software. Apps from startups may not integrate back-office data. Plus, there are initial glitches, says Phul, leaving customers as the guinea pigs.

Pros
Wanting to upgrade before the October 2015 mandate, Ivan Olmedo, director of IT for Philadelphia-based Philly Pretzel Factory, found a Canadian company renting POS systems that already integrated chip-and-pin and Tap-and-Go payments and that were Apple Pay compatible. Instead of a high upfront cost, his lease deal spreads hardware, support and more over a recurring fee (Olmedo would not disclose what he pays). And the supplier upgrades the hardware after a few years.

Cons
Availability. Olmedo wanted to be an early adopter of EMV technology, fearing a rush on hardware as the mandate approaches next year. Despite reassurances from POS suppliers in the U.S., “a lot of big companies are still in the process of developing systems,” he found.
Complicated updates. Updating software is a more involved process on traditional POS systems, rented or not, says Olmedo. With developments continuing, that means more updates to come.

Pros
At Wing Zone, Scott is taking a wait-and-see approach before upgrading the current POS, as technology rolls out and rules around EMV get hashed out. “It’s changing on a monthly basis … that’s why they’re not out yet,” he says. One positive, operators say, is that POS manufacturers are working out the bugs as they go, plus relationships with credit-card issuers and processors allow them to anticipate changes to rules. Scott’s been assured by his provider that, “they are on top of it.”

Cons
Timing. As big suppliers keep developing, the clock keeps ticking. The restaurant industry is not a quick adopter of new technology, says Edward Beck, CIO at the National Restaurant Association.
Cost. “For big stores with 15 to 20 registers, cost will be exorbitant,” says Scott, estimating a couple thousand dollars per location, a hard sell for franchisees. And support services aren’t cheap; Phul says he paid about $30,000 for hardware, software and support fees in the past.