Sizzling plates of fajitas travel many times a day from kitchen to dining room at each of the over 1,500 Chili’s restaurants. To accommodate that volume, management at the Dallas-based chain wanted to find a quicker, simpler and safer way for staff to execute this signature item. 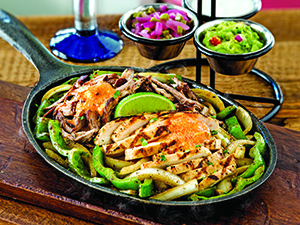 They found their solution in a plug-in induction unit that heats a fajita plate and “sizzle sauce” (marinade) to 500 F in 70 seconds. Previously, the pan plates were lined up in the charbroiler where it took 40 minutes to an hour for them to reach 550 F to 600 F, says Homero Ortegon, Chili’s vice president of strategic innovation. Once hot, the kitchen staff assembled the fajita and sauce and passed the burning hot plate to servers for table delivery.

The switch to induction allows the staff to add the sauce to a pan plate that’s at room temperature—before it’s heated. “This is a safer way to execute in our restaurants, and it’s much faster,” Ortegon says, adding that the unit has three additional settings ranging from 20 to 90 seconds. “Later, if we want [to use the method for] sizzling desserts, we have that flexibility in the controls.”

While induction cooking’s safety, speed and efficiency appeals in today’s modern kitchens, the technology itself isn’t new. In the 1970s, induction rose in European restaurants when energy-conscious, highly trained chefs turned to high-power induction ranges for cooking. In the U.S., foodservice induction curiosity only seriously started in the mid-1990s, according to manufacturers of the equipment. Early equipment focused on cooktops and buffet food warmers, especially in hotels, healthcare settings and college dining halls where fire codes often prohibit open flames.

Induction works through magnetism interacting with molecules in pots and pans made of magnetic materials. Although special induction-ready cookware is available, most stainless steel and cast-iron pans with flat bottoms work just as well. Copper, tempered glass and aluminum cookware is not compatible.

Since no element in the induction cooktop or range gets hot, the equipment doesn’t contribute to overheating the kitchen. With induction cooking, 84 percent or more of the electrical energy generated gets used to cook. In gas cooking, only 40 percent of the energy is transferred to the cooking vessel and the remainder radiates into the kitchen. Plus, the induction unit remains cool to the touch when the prescribed pan is removed, thus avoiding burns. These features can contribute to lower energy and insurance costs and fewer workers’ compensation claims for operators.

The 300-unit, Boston-based Au Bon Pain operates a few locations in hospitals where it uses induction equipment to save on construction costs in the leased spaces. There are drop-in warmers built into self-serve kiosks to keep ingredients warm and countertop induction ranges to prepare hot foods, such as rice bowls, says Roger LaRochelle, director of construction purchasing for Au Bon Pain. “Structurally with induction, we don’t have to do anything,” he says. “We don’t have to modify the HVAC, and we don’t need a fire-suppression system. The heat is created in the cooking vessel, so we don’t have to vent that equipment.”

More recently, induction technology is being integrated into a broader range of cooking gear, as evidenced by the number of booths showing induction kettles, warmers and more at the National Restaurant Association show this past May in Chicago. Concave cookers now are available to fit with specially designed woks, making it more convenient and safe to set up stir-fry stations. Newer induction rethermalizers maintain a set temperature, preventing  soup and oatmeal from burning, getting crusty around the edges or building up condensation under the lid. And a secret to delivery-pizza quality lies in induction warmers that themselves are not hot to the touch but maintain the pizza at a consistent temperature without creating moisture just prior to delivery.