Americans have their flapjacks and Hungarians their palascintas. Seems that a culture isn't a culture without its very own pancake. True, the supple golden discs are more common in the Western world, but pancakes sizzle on far-flung griddles in Indonesia, Syria and China. The pervasive, persistent pancake is, simply put, pandemic. 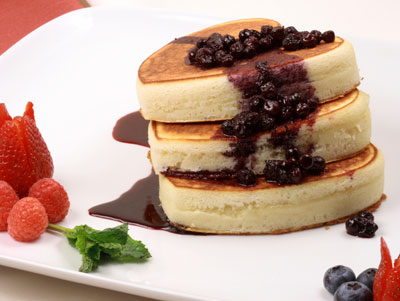 Why is that? What's so special about pancakes that they defy history and national borders? What propels them into the upper echelon of elemental foods along with puddings, soups and stews, the dishes that make all of humanity salivate? The pancake has even vaulted a rung higher on the culinary ladder as it looms large in our imagination, inspiring folktales, sayings, festivals, silly races and ritualized food fights. How can such a humble foodstuff hold such sway?

It's very humbleness for starters. Pancakes are one of the original fast foods. Pancake batter calls for cheap and easy-to-find ingredients—milk, flour, butter or oil, eggs, even just flour and water in some recipes. The batter can sit around, or overnight in the fridge. The cook needn't have a Viking range, just a griddle and a fire as any camper knows. American settlers even fried them on their hoe blades over crackling fires, inventing hoecakes. "They are really easy and really flexible and you don't need an oven. They are a good answer to a necessity," says Naomi Duguid, co-author with her husband of "Home Baking: The Artful Mix of Flour and Traditions from around the World."

Duguid grew up eating her grandmother's pancakes, yolky yellow from free-range chicken eggs and topped with sugar and lemon juice. On one of her many trips to Southeast Asia she improvised the family recipe using coconut milk and frying the pancakes in a wok. She served them with palm sugar and lime. "Life is about flexibility, not about formulas, and that's exactly where the pancake fits in," Duguid says.

That is why the pancake lends itself to countless versions, so many cultural signatures. They can be wrappers or the main event, breakfast or dinner, street food or a luxury dessert. The Dutch pop theirs in the oven for a pancake-souffle hybrid. Indonesians wrap them around sugared coconut meat. Brits munch yeasted, holey cakes with preserves.

Pancakes are in fact such changelings they can be hard to define. Nearly every time you come up with a rule, a cake defies it. What about tortillas or chapattis? A vast grey area lies between pancakes and flatbreads. According to "The Oxford Companion of Food" a pancake is made from a batter of flour, eggs and milk and fried in a shallow pan or cooked on a greased griddle." John Mariani in his "Dictionary of American Food" boils them down to "flat cakes cooked on a griddle and browned on both sides." Noted food historian Barbara Haber says they must be cooked on a hot surface, made of some kind of grain and don't use yeast. Then, after mentioning a leavened Yemeni pancake, Haber says about the yeast, "I take it back." Duguid says what you call a pancake depends on where you live. "I think it's a culture bound thing."

The true magic of pancakes lies in how such inexpensive simplicity produces such reliable deliciousness. Few things in life deliver so much from so little. That explains why they have survived various revolutions, from France's haute cuisine to America's low-carb fad. Every morning in Berkeley, California, you'll find a mob chowing down amber stacks at Bette's Oceanview Diner, spitting distance from the epicenter of new food in America, Alice Water's Chez Panise. When Bette Kroening opened her diner in 1982, pancakes quickly took center stage and there they have remained though American food has reinvented itself once or twice since. The diner dishes 225, mostly buttermilk, cakes daily. "They have been good to me," Kroening says.

Certainly, the pancake has history on its side. It is a direct descendant of the very early Neolithic flatbreads baked on hot stones. When the pancake split from early flatbreads remains a mystery, but the break was made by the time Romans swaggered across Europe and Africa. Apicius, the ancient Roman cookbook, includes a recipe served with pepper and honey. Pancakes survived the collapse of the Roman empire. By the Middle Ages, they were known as frayse and portable griddles, key to pancake making, were common. A 1430 English culinary manuscript mentions pancakes, and the oldest Dutch cookbook, 1514, includes several recipes. "The Family Dictionary, or, Household Companion" printed in London in 1710 instructs cooks wanting "cripf" pancakes to "make 12 or 20 of them in a little Frying-pan, no bigger than a Saucer, then boil them in lard, and they will look yellow as Gold, and eat very well."

The English and Dutch settlers not only brought their various pancakes to our shores, but their undying devotion as well. In short order Americans claimed them as their own, flipping johnnycakes, flannel cakes and flat cars for the hearty breakfasts required to build a nation. Jefferson served them at Monticello. The writer James Fennimore Cooper spatulaed some for friends in Paris. The first ready mix was introduced at the New Era Exposition in St. Joseph Missouri in 1889. Then came pancake houses. The Dutch may have some 100, but IHOP alone, which opened in 1958, has 1,186 in the United States. As pancakes have figured largely on the table so too have they in culture and tradition. In the past, Russians ate a meal of pancakes after praying for the dead. In France, dropping a pancake was considered bad luck—Napoleon supposedly blamed it for a disastrous Russian campaign. Norway, Germany and the United States have folktales of runaway pancakes, all of which get eaten in the end.

In many European countries, Shrove Tuesday, or Mardi Gras, was previously known as Pancake Day. Stacks of pancakes were consumed to use up the butter and eggs forbidden during Lent. In England, the tradition lives on with celebrations such as the Great Pancake Grease, during which a school cook at Westminster Abbey tosses a huge pancake to a pack of schoolboys. The boy who emerges from the melee with the largest piece gets a prize. In Olney, England, the religious holiday is known as Pancake Day Race. In most years since 1445, local, aproned housewives toting cast iron pans sprint 375 meters while flipping a cake three times. The first to arrive at the church, serve her pancake to the bell ringer and be kissed by him, wins. The 2005 winner, 68 seconds. A rival race is run the same day in Liberal, Kansas. In 2005, the U.S. race winner bested Olney's by one second.

Pancakes are not laden with as much religious meaning in the United States, but they remain the food of choice at church breakfasts, or just about any kind of breakfast for that matter. Every year, locals in Springfield, Massachusetts, man the griddle for the World's Largest Pancake Breakfast. In 2002 they served nearly 76,000 stacks. Pancakes are also fodder for many children's books, such as "Curious George Makes Pancakes." The breakfast staple also inspired one of America's most familiar clichés, "flat as a pancake." That phrase having been amply applied to Kansas, a team of scientists put it to the test in 2003. Their findings: Kansas is in fact flatter than a pancake.

BAO BING, PO-PING: The thin Mandarin pancakes served with Peking duck and moo shu pork. The cakes are made of fine wheat flour and boiling water, rolled thin and cooked two at a time.

BIN-JA TUK: Korean pancakes made from soaked mung beans. While the pancakes cook, strips of pork and kimchi are placed on top, then the cake is flipped.

BLINI: The savory, ultra-light pancake of Russia made traditionally with buckwheat flour and cooked in a small cast-iron pan. Blini are eaten hot with butter, herring, smoked salmon, chopped egg or caviar and sour cream. They date back to the Middle Ages

BLINTZ: The traditional pancake of Jewish cuisine is fried and rolled with sweet or savory fillings, such as lox or cinnamon and sugar and sour cream.

CREIER DE RITEL PANE: A Romanian dish of pancakes filled with mashed calves brains, onion, parsley and eggs. Once filled, the pancake is dipped in eggs and breadcrumbs and deep fried.

CREPE: The French pancake is, of course, the thinnest of them all. Sweet or savory, crepes can be street food or served in a five-star restaurant. Crepes Suzette, once the epitome of luxury desserts, is doused with liqueur and set afire.

DADAR GUTUNG: This Indonesian pancake is wrapped around coconut meat cooked in water with brown sugar and flavored with lemon juice and cinnamon, with a little salt.

EIERKUCKAS: A rich pancake from the Alsace Lorraine region of Northeastern France. The batter is mixed with red currant jelly and cream.

FLAESKPANNKAKA: This Swedish pancake is cooked until nearly set, then pork or bacon is laid on top and cooked until completed.

INJERA: This spongy, yeasted pancake-like bread made from millet flour doubles as food and utensil in Ethiopia. One or two injera are placed on a large tray and then covered with various stews. Diners scoop the stew with torn pieces of extra injera. Lastly, the injera bread that lines the tray, soaked through with stew juices, is eaten.

LATKE: In Jewish cuisines, the crisp potato pancake is eaten with sour cream or applesauce.

PALASCINTA: A thin Hungarian pancake similar to and used like a French crepe. Also popular in Austria.

PANNEKOEKE: The basic Dutch pancake might be small, filled with custard and served as dessert, or large with bacon cooked into it and dressed with molasses as an entree.

PIKELETS: A yeasted pancake with a holey surface in England. In New Zealand and Australia, the term refers to tiny pancakes that are served cold with preserves, whipped cream or lemon butter.

PLOYES: French Canadian sweet or savory buckwheat pancakes cooked on one side only.

POH PIA: In Singapore, these pancakes are served with a variety of filling, such as chicken or fried garlic, and sauces for diners to choose from.

QATA-EF: In Egypt and Syria, these pancakes are cooked on one side, folded over a sweetened cheese or nut filling, then deep fried. Medieval Arabic cookbooks mention this dish.

TORTILLA: A thin pancake-like flatbread made of cornmeal or flour and water that dates back thousands of years in Mexico and Latin American cooking.