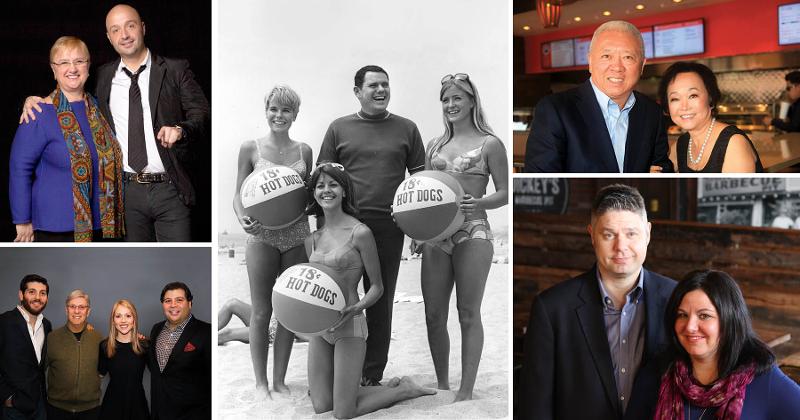 These families have been part of the restaurant business for generations.

Asian-born immigrants Peggy and Andrew have turned their Panda Express chain into an empire as well as shown interest in the emerging chain world, investing in brands such as Just Salad, Pieology and others, sharing the titles of co-chairs and co-CEOs. Their daughter, Andrea, has also entered the business, taking on the CMO role with Panda. And the family’s interest in restaurants dates back even further: Andrew’s father, master chef Ming-Tsai Cherng, opened the first Panda Inn in 1973. Andrew, his mother and siblings all worked in the restaurant.

Lisa Ingram, president of the national burger chain, marks the fourth generation of Ingrams to helm the brand, dating back to founder E.W. “Billy” Ingram.

Few families are more deeply rooted in restaurants than the Brennans. Different branches of the family operate a range of restaurants, and while they are most well-known for their influence on the New Orleans dining scene, they’ve got operations in Houston, Las Vegas and Anaheim, Calif., as well.

Leadership of the barbecue chain has been passed through the family, beginning in 1941 with founder Travis Dickey. His sons T.D. Dickey and Roland Dickey took over leadership roles in 1967, and grandson Roland Dickey Jr. became CEO in 2006. Roland Jr. has since become chief of Dickey’s Capital Group, and his wife, Laura Rea Dickey, is CEO of the restaurants. Roland Jr.’s mother, Maurine, who helped launch the brand’s charitable foundation, is also involved.

This Arkansas family runs a number of restaurants, including multiple locations of Taziki’s Mediterranean Cafe, Paninis & Co., Petit & Keet and Watercolor in the Park. Father Jim Keet and Gerald Hamra brought Wendy’s to Arkansas and became honored franchisees, winning the Wendy’s Founders Award, among other commendations. Now, his sons Tommy and Jake, along with Jake’s wife, Stephanie, are bringing their father’s mentality to their own operations.

Twins Nicolas and Patrick Jammet grew up around influential restaurateurs: Their parents, Rita and Andre, owned La Caravelle, an upscale French restaurant in New York City, for more than 20 years. Patrick, formerly in marketing with Honest Tea, is now with a firm that invests in food and beverage startups. But it’s Nicolas’ venture, fast-casual chain Sweetgreen, that has cemented the family’s ongoing legacy in the business (Patrick and their other brother, Christophe, serve as advisers for Sweetgreen). Nicolas always had a passion for the restaurant business, Rita once told Restaurant Business, so she worked her connections to help him score internships and learn the ropes.

The family’s multiconcept Italian group has seen some changes since its partner, Mario Batali, was accused of sexual assault. They’ve taken efforts to buy Batali out of the business, leaving matriarch Lidia and son Joe, along with partner Nancy Silverton, at the helm of restaurants such as Del Posto, Babbo Ristorante, Carnevino and more. Also involved in the business: Lidia’s daughter, Tanya Bastianich Manuali, who is a partner in Lidia’s Pittsburgh and Lidia’s Kansas City.

In-N-Out president Lynsi Snyder may have a relatively untraditional past, but her family’s business has managed to remain a consumer favorite with a cult-like following. The brand, founded by her grandparents Esther and Harry in 1948, has seen various members of the Snyder family at the helm, including former CEO H. Guy Snyder and former President Rich Snyder.

The Morton family is behind more than 100 chain and independent restaurants. Patriarch Arnie Morton launched the famed Morton’s The Steakhouse in 1987 before selling the brand, which is now owned by Landry’s. He also opened Walton Walk and Arnie’s in Chicago and partnered with Hugh Hefner and Victor Lownes to open the first Playboy Club in Chicago. Five of Arnie’s seven children have found their way into the restaurant business, including launching national brands—such as Peter Morton’s Hard Rock Cafe and Michael Morton’s N9NE Steakhouse—and buzzed-about independents from David and Amy Morton. Even his grandchildren have jumped into the business: Grandson Harry Morton launched the Pink Taco brand, which was acquired by private-equity firm Z Capital in 2016.

Richard Melman founded Chicago-based Lettuce Entertain You, which launched in 1971 and now operates more than 100 restaurants. While they didn’t all start in the restaurant business and took time to explore other companies, his three children—R.J., Jerrod and Molly—have all made their way back to Lettuce, with R.J. serving as president. The interest in the business dates back to before Richard, though—his father, Maurice “Morrie” Melman, was also a restaurateur.

Patriarch Arthur Simms is a restaurateur with concepts such as The Kettle, Arthur J’s Coffee Shop and more. While one of his sons, Scott, became a partner with The Kettle, his other son, Tom, founded the Mimi’s Cafe chain. The next generation is equally involved in the restaurant business. Tom and his sons Mike and Chris make up Simms Restaurant Group. Chris focuses on Lazy Dog Restaurant & Bar, which he founded, with Mike running the group’s operations, which includes Simmzy’s, Tin Roof Bistro and more.

It all started with a root beer stand in 1927. The Marriott family has developed and continues to be behind one of the country’s largest hospitality businesses that includes the namesake hotel chain and various foodservice ventures.

The son of a politician, Thad Eure Jr. opened the Angus Barn steakhouse, consistently one of the top-earning independent restaurants in the country, in 1960. He continued to build restaurants in North Carolina, including the relaunch of Angus Barn after a fire, as well as chain concept Darryl’s, which General Mills purchased and grew to 39 restaurants, Fat Daddy’s and 42nd Street Oyster Bar. Thad Jr. has further contributed to the industry by serving on the National Restaurant Association Board of Directors and as its president. Now, his daughter Van Eure heads up the business.

Click here for more insights and information on the Centennial.