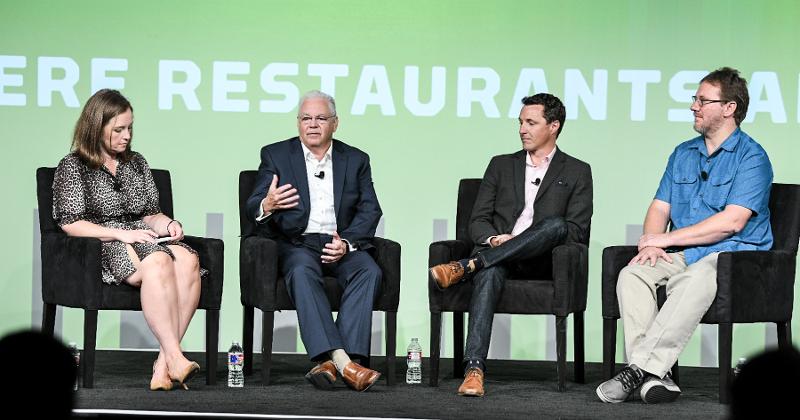 “More has changed in the restaurant business in the past two to three years than we saw in the 10 to 15 years before now,” said Wade Hanson, principal for Technomic, at this week’s tech-focused FSTEC conference. So much of that change can be attributed to new and more readily adopted technology entering the space.

It’s that rapid evolution that brought top operators and suppliers together to discuss how restaurants and technology collide, and where the industry is headed. FSTEC, held earlier this week in Dallas, allowed tech-forward operators to talk about pain points and solutions as well as play futurist. Here are some key takeaways from the gathering of the minds.

“Technology is at the forefront of our strategy,” said Kevin Fish, senior VP, digital for Wingstop. The chain looks to implement tech that not only improves the guest experience, but the operator experience as well—a common sentiment from operator attendees. For Wingstop, that means “think big, start small, learn fast,” Fish said. The brand takes a critical area of the business, creates a prototype around it and tests it in a small environment before scaling up. But even before getting to the testing phase, Wingstop establishes a baseline and KPIs. “Solving a problem has to be measureable. … [We make] data-driven decisions across the board,” said Fish.

Tech is key to recruitment and retention

McDonald’s saw a 35% increase in application flow during its one-day virtual hiring event held via the Snapchat app. The launch of the “Snapplications” proved that operators should look to recruit hourly staffers where they are—and that often means turning to social media and revamping the actual application process, said Hanson.

Once hired, technology also comes into play to improve the employee experience, he said. KFC, for example, uses voice-activated training in the U.S. and Australia. If a staffer has a question, they can ask the virtual assistant, which prevents that employee from breaking the line flow to go ask someone. The chain found that not only was the flow improved, but the work quality also increased because employees felt more comfortable asking this way.

Employees are also crucial for innovation

Fish cautioned attendees of one misstep that can be avoided: “You can’t just sit in the office and make decisions about technology.” Fish suggests executives get into the restaurants and spend time with team members. “Some of the best ideas come from these folks. To leave that untapped can be a pitfall for some brands.” It’s not just feedback on existing tech that Wingstop turns to team members for; ideas for how to solve existing problems often come from those working in restaurants.

“Some of the best ideas come from [restaurant employees]. To leave that untapped can be a pitfall for some brands.” —Kevin Fish, Wingstop

The kitchen is getting smarter

Robotics and AI are making their way into kitchens for a variety of reasons, but speakers at the FSTEC Conference agreed on one thing: It’s the redundant, monotonous tasks that can—and will need to be, given the labor climate—automated. Often, it’s small-footprint restaurants driving the change, said Melissa Wilson, principal with Technomic. “New technology is helping squeeze more high-tech equipment into kitchens,” she said.

Consumer-facing development should be consumer-first

There was a lot of debate over the use of kiosks. Nigel Benton, manager of operations technology for KFC, rolled his eyes when someone mentioned kiosks as a labor-saving tactic. He pointed out that, while McDonald’s did put kiosks in its stores, it always has someone manning those kiosks. It’s a redeployment of labor, with more of a focus on the help and hospitality side. So if not for labor-saving reasons, why else are restaurants adopting guest-facing technology?

“Our goal is to eliminate friction,” said Raghu Mahadevan, vice president of delivefor convenience store chain 7-Eleven. “One thing that drives technology is customer obsession.” While the chain is always looking to find ways to be more efficient and operate leaner, development always starts with the customer, he said.

The restaurant industry can attribute $40 billion of its sales in 2018 to delivery. That’s a 7% share, double from just a few years ago, said Melissa Wilson, principal with Technomic. While high commissions with third-party marketplaces are still a chief complaint from restaurant operators, the other challenge is losing the ability to track and understand customers, said Josh Patchus, founder and chief data scientist for PXY Data and former chief data scientist for Cava. “Restaurants are playing a game of chess with dice. Third-party marketplaces are playing a different game,” he said. While operators such as Stephen Smittle, COO of seven-unit Gusto Farm to Street, still sees third-party delivery as an opportunity to build top line sales, he admits that the back end doesn’t always work as well. He and others agree that the goal is now to migrate those customers back to the restaurant’s own app and ordering channels now that the business has been established.

But, added Wilson, “If the economy does start to slow down and consumers start to dial back, we anticipate that will have some impact on delivery.”

For delivery, menu optimization is crucial

While there’s a lot of legislation in play on cash, with some areas even outlawing cashless stores, cash is still a large piece of the restaurant business. Forty-one percent of all transactions at QSRs and fast casuals are cash transactions, and 25% of transactions at bars and restaurants are cash payment, said Peter Wolf, VP of retail business development and marketing – Americas for payment systems provider Glory.

At this point, there’s still some angst around digital payments for operators, said Ryan Dickerson, director of digital commerce for Inspire Brands. While online ordering and payment has certainly come a long way in the past decade, Dickerson is still having some of the same conversations around processing payment, PCI compliance and more that he was having many years ago. For now, Inspire has built its payment ecosystem with a level of “extensibility and flexibility” to allow multiple options to fit the different consumer sets it serves. While he admitted that it can be a headache at times, it’s needed.

But in the future, even more mobile will be accepted, predicted Mike Hardy, IT director for Snooze, an A.M. Eatery.