When Todd Barrick gets up in the morning, he checks refrigeration temperatures at his seven Domino’s units, based in Gettysburg, Pa.—on his phone.

If one store has neglected to turn on a prep table, he calls the manager. When a walk-in cooler is running slightly below 32 degrees, he can catch it before the food freezes. When a soft drink machine breaks down in the middle of the night, he gets an alert.

“My wife kind of hates it, that I’m so in tune with the stores,” Barrick says. “But it’s great for my peace of mind.” That reassurance comes from six wireless temperature and motion sensors, mounted on key equipment in each restaurant. He installed them after four walk-ins failed, each threatening $3,000 worth of food.

Barrick is part of a pioneering band of operators who are integrating the internet into restaurant kitchens. The so-called internet of things gets buzz because of self-driving cars, but it can just as easily hook up refrigerators, ovens and fryers. Research firm Gartner Inc. predicts that by 2020, smart appliances will save food and beverage companies 15% a year.

Those savings are coming in a wide variety of ways, say owners who have taken the digital plunge, many for a cost of entry under $1,000. Here’s a sampling of how restaurants are using connected kitchens.

At 10 KFCs owned by Jody Luihn in Morrisville, N.C., fryers and pressure cookers communicate with the same system as the cash register. The fryer signals when the shortening is hot enough, times the cooking of the chicken and reports when 32 new pieces are available for sale.

Once the pieces are fried, a screen advises how long they have been held and when to discard them. It rates the store on selling pieces while they’re fresh and dings it for selling pieces that aren’t. “Because you’re managing the cook cycle and the hold times closer, you run out of chicken less,” Luihn says. “The chicken is hotter as well, and the customers notice that.”

Food safety at your fingertips

Every six months, Matt Kritzer gets visits from health inspectors at his five Jimmy John’s stores in Huntsville, Ala. One of their requests is a food safety report—a historical record of temperature readings. In years past, employees spent time compiling those numbers several times a day, on walk-ins, cold tables and bread retarders.

Today, with wireless thermometers reporting every minute, a manager can click a mouse and print a report. “They can see that you’ve been in compliance every day since their previous visit,” Kritzer says. That automation has proven to be a big labor savings, too. 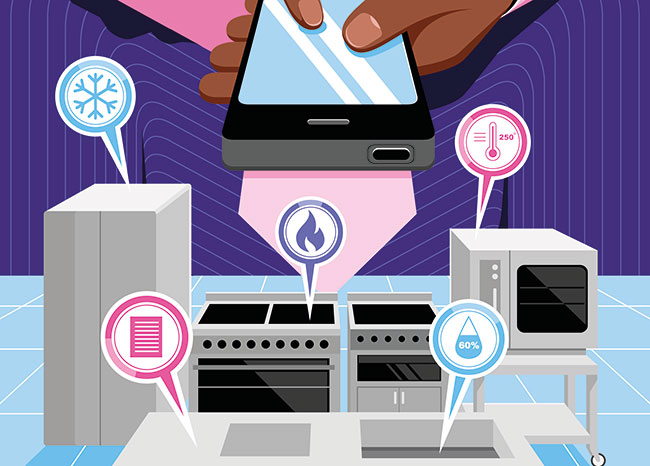 “BECAUSE YOU’RE MANAGING THE COOK CYCLE AND THE HOLD TIMES CLOSER, YOU RUN OUT OF CHICKEN LESS.” —JODY LUIHN, KFC

At the Austin Country Club in Austin, Texas, Executive Chef Bob Burns scatters 23 sensors throughout the kitchen, from refrigerators to cheese coolers. He sets a temperature threshold for each, and whenever it’s exceeded for more than 30 minutes, his phone alerts him. “Then I have to ascertain whether it’s just a defrost cycle going on or an actual problem with the unit,” he says.

He especially watches for readings that edge up over time. When that happens, he can check whether a thermostat needs resetting or a gasket requires replacing. He not only heads off potential breakdowns, but also avoids buying new equipment.

“How good is it to throw out something that’s 5 years old, when it’s still working?” says Burns. “It helps us watch the older units and keep the new ones honest.”

In Gretna, Neb., Jason Zakaras owns 31 franchised KFCs and Taco Bells. By automating his cooking oil system, he not only saves labor on lugging 35-pound jugs across the floor, but he also gets data for improving operations.

A master tank pipes oil to his fryers. Inside the tank, a float transmits levels several times a day. He can go online to see how much each store is pouring and when, as well as a food-to-oil ratio. “By managing the oil appropriately, we can extend the life of a batch of oil,” he says.

When the level drops below a certain point, it also triggers his supplier to schedule a delivery to refill oil. “It’s eliminated some of our ordering complexities,” Zakaras says. “Plus, when we need it, we have it.”

Before more than 1,000 company-owned Arby’s close for the day, employees load beef into digitized ovens to roast overnight. Cooking and holding temperatures get reported in real time to corporate headquarters.

“The product is ready to go when they walk in in the morning,” says Rocky Rockwell, corporate chef for the oven manufacturer, Alto-Shaam. “They’re saving labor by doing things when nobody’s in the actual restaurant itself.”

The cookers also flag mistakes. “A franchisee called me up and was very upset that the system had told him to throw out his beef,” says Martin Flusberg, CEO of Powerhouse Dynamics, whose software manages Arby’s ovens. “We looked at the temperature records and found out they had put beef in the oven before it was defrosted. He left happy that we had solved the problem.” Arby’s declined to be interviewed for this article.

Perhaps the most futuristic kitchen is at San Francisco’s Zume Pizza. The delivery-only concept was co-founded by computer gaming veteran Alex Garden, who says, “The next big wave of efficiency is coming from how appliances work together.”

In Zume’s kitchen, not only are mixers, ovens and conveyor belts internet-controlled, but five robots also work alongside humans. Some handle tasks like shaping dough and pouring sauce. Another weighs partially cooked pizzas while it loads them onto racks. If half an ounce of sauce is spilling over the edge, the system detects it, and a service person can adjust the machines.

A single kitchen can crank out up to 20,000 pies a day, says Garden. It feeds trucks with connected ovens, which finish baking the pizzas en route to the consumer. With two Bay Area trucks right now, he’s aiming for 25 by the end of the year.

The finished product will be his ultimate argument for kitchen automation, Garden says: “The No. 1 determinant of food quality is the length of time between preparing and eating it. We’ve pushed that step to the last possible second.”