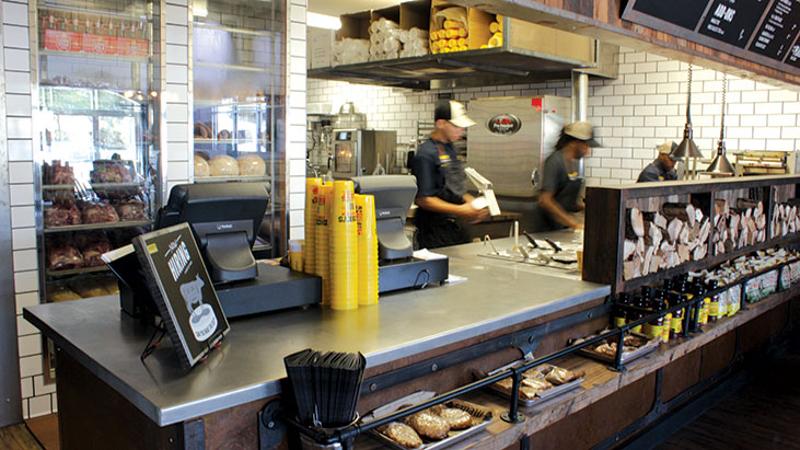 At first glance, the manager appears to be talking to himself. Into thin air, he asks what yesterday’s sales were. But then an answer comes, in a computerized voice from a speaker.

That’s the vision Laura Rea Dickey has for the Dickey’s Barbecue Pit of the future. “We want to take our system back to its original purpose—to have data really usable for folks who are not data analysts,” she says. “Instead of carrying around a tablet, you’ll simply call out.”

She’s also trying gadgets that can hook into Dickey’s data. A scale transmits the weight of each order to compare with how much was sold at the register. A sensor in the walk-in sends an alert if meat was not rubbed or marinated at the right time.

Smart appliances are the next evolution for many chains. Columbia, S.C.-based Groucho’s Deli plans to put in beacons. The tiny transmitters will search any app-using customer’s profile and send an individualized marketing message. “By tracking their data, we can ... increase their add-on sales,” says Franchise President Deric Rosenbaum.

A more futuristic use of data is computer simulation. At Cava Grill, Josh Patchus takes records from a particular store on a given day and calculates what might have happened if the store had had more workers, or fewer. The goal is to find optimum levels for every occasion.

“We run a high volume of ‘What If?’ scenarios,” Patchus says. “Managers get a sense of what staffing should be at a certain time.”

In recent years, McDonald’s has pushed simulations into overdrive. According to reports, at its Innovation Center in Romeoville, Ill., it has constructed digital models of individual stores.

The virtual Golden Arches are based on a mix of data, from sales to local demographics, as well as from video shot inside and out. Software picks apart guests’ behaviors in drive-thru lanes and diners’ paths as they move from door to counter to seat.

A franchisee can go online to view a model of his store, then play with possible changes. He can add a drive-thru lane to project how many extra cars he’ll be able to serve. Or he can see which layout gets the most diners through with the shortest waits.

McDonald’s did not respond to RB’s interview requests for this story. But in a 2012 presentation, its research and innovation director said, “We use storytelling to let them know what they should be investing in to improve the capacity of their restaurants.”