Fortunately for adventuresome cooks, France produces more cheeses than there are days in the year—from fresh to aged, soft to hard, bloomy rinds to washed rinds to triple crèmes to blues. To invigorate your kitchen, take the tour de fromage and elevate your French cheese IQ. 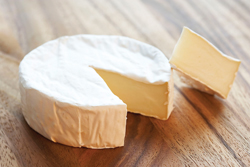 Brie and company: the magic of mold

That velvety white coat on the outside of Brie demonstrates the positive role that molds play in cheesemaking. But how does it get there? Modern cheesemakers add the mold Penicillium camemberti to the milk, or spray the spores on the young cheeses. With the right temperature, humidity and surface pH, the mold quickly blooms, encasing the cheese.

The rind limits evaporation, keeping the interior moist. And it gradually ripens the interior—known as the paste—so the cheese becomes progressively more creamy.

The mold also contributes to the mushroom aromas of bloomy-rind cheeses like Brie, Camembert and Coulommiers. To judge ripeness, press the cheese gently; it should have some give. Reddish or tan markings on the rind also indicate that the cheese is maturing nicely.

French washed-rind cheeses, such as Tomme d’Alsace, Reblochon, Saint-Nectaire and Munster, have a pungency that can fill a room. Cheesemakers work hard to develop the aromas in washed-rind cheeses by bathing them repeatedly with brine as they age. The brine seasons the cheese as the salt works its way in. But it also creates a moist, saline surface, luring bacteria that like those conditions. Washed-rind cheeses with a tan rind have desirable bacteria on the surface. These bacteria produce enzymes that help to ripen the cheese, producing those head-turning scents.

The cheeses of the French Alps are still mainly large-format cow’s milk cheeses, such as Beaufort, Comté, Emmental and Abondance. They are firm cheeses, built to last. A Comté, weighing 120 pounds, can improve for 18 months or more.

If you want to make a cheese capable of extended aging, you have to get the moisture out early. Alpine cheesemakers do that by cutting the curds small, heating the curds and then pressing the young wheels—all steps designed to expel whey. The result is a durable cheese with a firm, tight texture. Most have no eyes (interior holes) or only a few small ones; the exception is Emmental, with eyes the size of cherries or larger. They form in Emmental because the wheels are aged in a warm room, producing carbon dioxide gas that can’t escape.

Triple-crème cheeses: when more is better

Triple-crème cheeses like Brillat-Savarin, Explorateur and Pierre-Robert feel like silk on the tongue, and they have an intriguing sour-cream or cheesecake flavor. They pair beautifully with raisin bread or walnut bread, with dried fruits, fruit compotes or fresh pears. For an elegant salad, toss baby greens with walnuts and sliced pears, then garnish with a slice of triple-crème cheese on a crouton.

Remember that most cheeses are at least half water. When labels indicate a cheese’s fat content, it is measured in the dry matter alone—the cheese minus its water. So a triple-crème cheese that measures 75 percent fat is really only half that. Nobody would claim that it’s diet food, but it certainly trumps butter nutritionally.

Blue cheese: wheels with a secret

Initially, blue cheeses such as Roquefort and Fourme d’Ambert probably occurred spontaneously, when some shepherd left a young wheel in a damp cave. Today’s cheesemakers choose their Penicillium roqueforti strains carefully. Roquefort producers would never reveal what strains they use. In a process that may be unique in the cheese world, they inject their secret strains into big loaves of rye bread, where the spores soon take over. The moldy loaves are dried and ground to a powder to make the inoculant, or culture, for the year’s cheesemaking.

France’s great blue cheeses come in myriad shapes and styles, from the rindless, foil-wrapped Roquefort to the handsome cylinder of Fourme d’Ambert with its natural rind to the buttery and mellow Bleu d’Auvergne. The blue develops in these white wheels only when the cheesemaker pierces them with needles—by hand or mechanically—to create air tunnels. Provided with oxygen, the Penicillium spores in the wheel shake themselves awake and begin to reproduce.

Go to any farmers’ market in France and you will find vendors selling chèvres in many styles: from as soft as cream cheese to firm enough to grate; from the size of a marshmallow to as broad as a beret. Some resemble a brick or a log, others a hockey puck or a bell. They may have a downy white rind, a fuzzy gray rind or no rind at all.

Yet all these cheeses have at least one thing in common: goat’s milk. When making chèvre, most cheesemakers use a culture that works slowly over many hours, converting lactose (milk sugar) to lactic acid until the acidity is high enough to coagulate the milk. In contrast, milk for most other cheeses coagulates in minutes with help from rennet. Chèvre producers may also add rennet, but not much or the curd will be rubbery.

For the finest chèvre, the fragile curd is ladled into molds by hand. Look for the phrase moulé à la louche—hand ladled—on labels. These exquisite goat cheeses—such as Valençay, Sainte-Maure, Selles-sur-Cher, Chabichou and Crottin de Chavignol—deserve to be showcased on a cheese tray. But for cooking, a fresh, unrinded chèvre is a more sensible and economical choice. Because there is no rind to trim, you have no waste.

Good cheese, like wine, has a limited lifespan. It improves, it peaks, and then it begins to decline. By handling it properly you can stretch out that timeline and postpone the demise.