Dean Corbett hasn’t recorded an episode of “Secrets of Louisville Chefs” in years, but at least weekly, customers tell him, “‘I saw you on ‘Secrets’ yesterday, and you were so funny,” he says. The chef-owner of Corbett’s: An American Place, and Equus & Jack’s Lounge in Louisville appeared as a guest chef on the weekly show, now playing in reruns. “That staying power is the real beauty of having an actual show.” 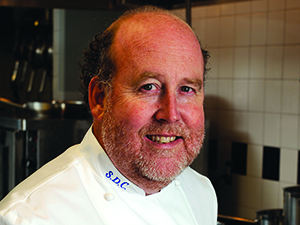 Corbett got his start on TV after his publicist suggested he do a brief cooking demo on a morning talk show. Not only did he like the excitement of live television, he thrived on the interplay with those in the studio. “[It] was fun, plus those are the people I might see at the restaurant that week.” That’s the aim of TV work, according to Corbett and others: drawing customers to the table.

When Scott Campbell was executive chef at New Leaf Restaurant & Bar in New York City, his “Iron Chef” battle with Mario Batali was as much about business building as reputation boosting. Even though he lost, the grueling TV event raised his professional profile meaningfully. “It doesn’t pay to be shy in this business,” says Campbell, now food and beverage director at the Radisson Hotel Martinique in New York City. “You’ve got to be out there pressing the flesh like Mario [Batali] and Bobby [Flay] and building that reputation. TV helps with that immensely.”

While acting skills are not required, you do need to be prepared, knowledgeable and personable to shine on camera. Here are some tips:

Broadcast your brand. New York City baking guru, Pichet Ong, didn’t initially want to do TV, but a personal quest to “demystify pastry” led him to appearances on “The Martha Stewart Show,” “Cupcake Wars” and many local-market news shows. “TV is an important tool to inform people about what it is you do,” says Ong, a veteran pastry chef whose resume includes stints at Spice Market and Coppelia; his dessert shop and bar will open in New York City this year.

Whenever Ong travels, he works to get local TV exposure at those destinations. “You’ll see people come in from Texas or Chicago and say, ‘I saw you on TV six months ago, so I came here.’ You never know how that ripple effect will actually work.”

Consider media training. While TV exposure yields benefits, it’s challenging work. “If you’re not a natural in front of the camera, you’ll need some media training,” says Jamie Estes, president of Estes Public Relations in Louisville. “The naturals just get a few do’s and don’ts from us, while the others need more guidance.” Professional coaching can teach you how to be comfortable in front of the camera and sell yourself and your business.

Make it memorable. The more knowledgeable and entertaining the chef, the more likely they’ll be invited back, says Peggy McClelland, executive producer for Indy Style, a morning talk show in Indianapolis. “We never want a situation where [a chef] shows up and wings it

Campbell advises chefs to focus on “an immediate takeaway,” such as a dish made from seasonal ingredients. Viewers love chefs to give insider knowledge. “Show a trick, some way you make cooking easier,” Estes says.

It’s important to have fun, Corbett says, even when something goes wrong. During a spot on NBC’s “Today” show two years ago, a set worker did not plug in Corbett’s food processor. “[On camera], I hit the button and nothing happens,” recalls Corbett. “So I just made the ‘grrrrrr’ sound of the food processor myself and started laughing ... You’re on TV, so make the best of it.”