Not every executive would initiate a turnaround by changing the staff dynamic. But for TGI Fridays U.K., CEO Karen Forrester’s people-first strategy has paid off in more ways than one. 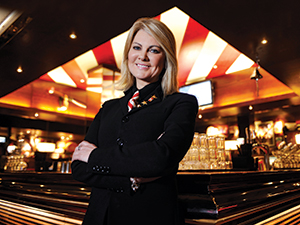 She helped make the London-based division one of the top U.K. companies to work for. That should come in handy now that TGI Fridays U.K. has been sold to its management via private equity firm Electra Partners, with plans to double the size of the business by 2020.

When Forrester joined the company in 2007 as managing director, the brand was seen by customers as old and tired, and staff turnover was topping a reported 150 percent a year. Forrester doubled down on the basics over the last six years by investing in the people who work hard for the brand.

Unit managers are invested in it because they are responsible for their teams, which are monitored weekly on operations calls and centrally at monthly executive board meetings.

Team members’ success also is recognized through a series of formalized programs, including achievement pins and gifts, which are given out on the floor, in front of customers.