Today’s bar scene has never been so vibrant, spawning trends in every category. Wine has been gaining market share; 39 million adults in the U.S. drink wine several times a week, according to the Wine Market Council, some 29 percent of them millennials. Meanwhile, the cocktail revolution is fueling the artisan distilling movement; there are now over 600 craft spirit producers, notes the American Craft Distillers Association. And craft beers are still posting double-digit sales growth, with hard cider gaining fast. 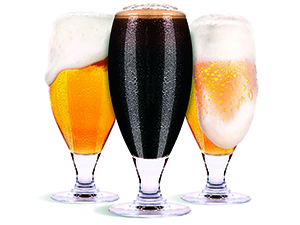 One driver of all this activity is a youthful penchant for experimentation. More than two-fifths of consumers (44 percent) who reported trying a new drink on their most recent on-premise visit were those adventuresome millennials, found Technomic Inc.’s recent BarTAB report.

Sweet on wine. Wines with sweet, fruit-forward flavor profiles, including Moscatos and Italian prosecco and Asti sparklers, are enjoying growing popularity, especially among younger consumers, according to Donna Hood Crecca, senior director of Technomic’s Adult Beverage Resource Group. To attract those drinkers, producers trumpet the sugar-coating: Many of the wine brands noted in Technomic’s DRINK New Product Tracker included the term “sweet” on the label.

“It absolutely blows my mind how many people really enjoy our sweet wines,” says Rob Warren, winemaker for Cooper’s Hawk Winery & Restaurants, a 15-unit casual-dining chain based in Countryside, Ill. His wine menus list about 50 selections, with sections devoted to sweet, fruit and dessert wines as well as sangria and sweet sparklers. “Sweet wines represent around 24 percent of our sales,” says Warren. Most popular is Romance Red, a still Concord wine. He believes these dolce vinos can be a gateway to more sophisticated wines.

Beer drinkers turn to sour. More than half of consumers (56 percent) agree that it is important for a restaurant or bar to offer a wide variety of craft beers, according to a 2013 Technomic Craft Beer Consumer Survey. This holds especially true at casual-dining restaurants (27 percent) and bars (20 percent), the top two locations where consumers purchased craft beer.

“Sour ales are becoming more popular, more available and more in demand at retail and on the beer lover level,” says Julia Herz, craft beer program director for the Brewers Association. One boon for restaurants: “Sour ales pair very well with a variety of foods. Acidity counters sweet, salt, and fat or richness in food,” she points out.

When Andy Polce, co-owner Tampa, Fla.-area Dunedin House of Beer, opened the first of three locations five years ago, he’d never heard of sour ale. Now he keeps two or three on draft at all times, in addition to half a dozen or so large-format bottles.

“It started with beer geeks,” says Polce, “but now it’s moving towards the mainstream.” That’s not to say he and his crew don’t have to do a lot of hand-selling with sours. “But it’s places like ours that are helping get people past gateway beers into new styles like sours.”

Cider rules. Joining beer at the bar is hard cider, which is on the cusp of a resurgence. Hard cider volume jumped 78 percent in 2012 and continued to grow in 2013, according to Technomic. Despite the fact that all the major beer makers now have entrants in the category, it’s the artisan producers who are attracting consumer attention with their wide range of specialty and seasonal offerings.

“Ciders can range from light and fruity to dry and yeasty and sour and funky,” explains Kim Bruso, bar manager at Seattle’s Capitol Cider. Half of its 33 taps are devoted to draft cider, and Capitol boasts over 120 bottled ciders, priced from $9 up to $75 for large-format rarities.

Since opening last June, the restaurant has established itself as a cider destination. The naturally gluten-free beverage is a good fit for the restaurant’s gluten-free menu, says Bruso. To educate the uninitiated, Capital serves free samples of any drafts, and offers two cider flights; one highlights local producers ($16), the other spotlights flavored ciders ($18).

1. Drinks on tap. Kegged wine and bulk-mixed cocktails have joined beer in being served via tap—sometimes with self-service. One-third of millennials agree that wine from a kegis of equal quality and flavor to wine poured from a bottle, according to Technomic research.

3. Consumer-friendly wine labels. Producers have realized that Americans want to know the varietal they are drinking and are attracted to wines with informative or whimsical labels.

4. Whiskey a  go-go. Bourbon revenues jumped 7.3 percent in 2012, according to the Distilled Spirits Council of the United States (DISCUS), and Scotch and Irish imports both notched double-digit increases.

5. Cool dispensers. At uber-bar Torst in Brooklyn, N.Y., the Flux Capacitor allows bartenders to dial in the ideal gas mix, pressure and temperature for each beer on its 21-tap system. High-tech equipment also is dispensing Champagne by the glass and infusing beer with hops, spices and fruits right at the tap.