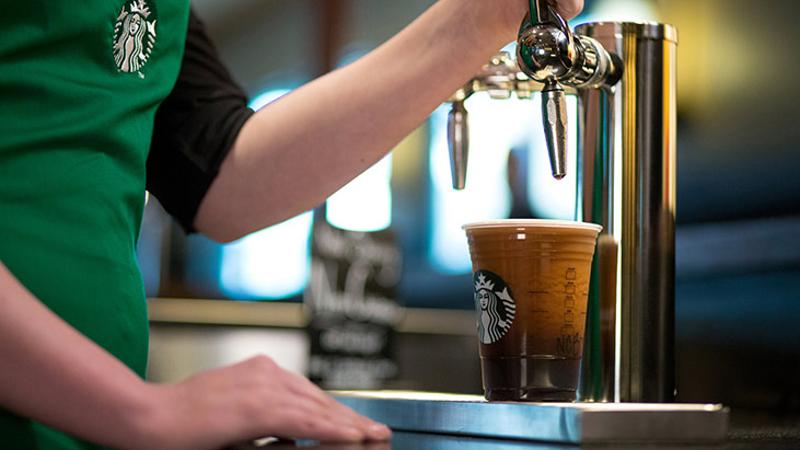 Following an initial test at the end of May, Starbucks announced that more than 500 of its stores will be pouring nitro coffee by the end of summer. Capitalizing on the cold-brew coffee trend—which reached $7.9 million in sales in 2015 on 115% growth from the previous year, according to researcher Mintel—select U.S. cafes will give up the counter space to serve the creamy, nitrogen-infused java made from the cold-brew base.

Bringing the bar to coffeehouses

The telltale sign of nitro coffee on offer at Starbucks is a chrome double tap, similar to a beer tap in a bar. In fact, it’s that bar vibe that attracted Portland, Ore.-based Stumptown Coffee Roasters to the high-tech brewing method a few years back. The 11-unit coffeehouse chain already had established itself as a coffee brand with a beer vibe when it hired Technical Services Manager Nate Armbrust, a food scientist with a passion for beer brewing, in 2013.

“On his second day, Nate started playing around with the idea of getting nitrogen into cold-brew coffee, just taking a nod from the beer world,” says Diane Aylsworth, Stumptown’s vice president of cold brew. “We were already drawing comparisons to beer, serving cold brew in stubby glass bottles and on draft, so that was his first instinct.”

A few months of tinkering later, the creamy cold coffee with its signature frothy head started flowing from Stumptown taps chainwide, and customers have lapped it up since, to the tune of double-digit sales growth. The chain has since started using the technology on espresso, creating a concentrated cold-brew espresso infused with nitrogen—dubbed the cold shot—that soon will be poured at all of its locations.

Nitrogenation must be done under super high pressure, using specific nitrogen-handling equipment, such as special tanks and filling lines. And at this point, the unique widget cans are expensive and difficult to source.   New training also comes into play. Because it’s a different system with tools not commonly found in a coffee shop, baristas have to be taught proper keg safety and handling, in addition to learning how to make the cold and nitro brews.

Despite the cost of the relatively new tech, the future looks bright for nitro coffee. With Starbucks buying in, more concepts may see its potential within the larger and growing cold-brew category.

Aylsworth adds that nitro’s one-two punch of coolness and less bitter flavor could draw more consumers to coffee. One reason: health. A 12-ounce nitro coffee from Starbucks has five calories and no sugar; the chain says nitrogen unlocks the natural sweetness of cold-brew coffee.

Plus, “Nitro has a little theater and enjoyment in the same way a bartender making a cocktail gives us enjoyment,” Aylsworth says, bringing in the eatertainment factor that millennials crave. “That enjoyment can really extend the coffee ritual into different dayparts, as can the smoother flavor, which appeals to some consumers who don’t traditionally drink coffee.”