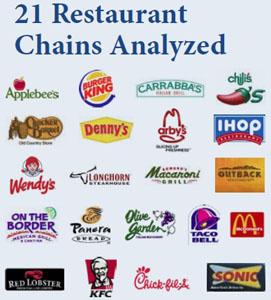 "Lower-Calorie Foods: It's Just Good Business" (click here for a PDF of the full report and charts) analyzed 21 of the nation's largest restaurant chains, including quick-service chains such as McDonald's, Wendy's, Burger King and Taco Bell, and sitdown chains such as Applebee's, Olive Garden, Chili's and Outback Steakhouse.

"Consumers are hungry for restaurant meals that won't expand their waist lines, and the chains that recognize this are doing better than those that don't," said Hank Cardello, lead author of the report, Senior Fellow at Hudson Institute and Director of the Institute's Obesity Solutions Initiative. Cardello is a former executive with Coca-Cola, General Mills, Anheuser-Busch and Cadbury-Schweppes.

Cardello and his colleagues worked with the Nutrition Coordinating Center at the University of Minnesota to develop the calorie criteria used to assess menu items. A main course item such as a sandwich or entree was considered lower-calorie if it had no more than 500 calories. Beverages with 50 or fewer calories per eight ounces were considered lower-calorie. Side dishes, appetizers and desserts with 150 or fewer calories also were categorized this way. Items that did not meet the criteria are referred to as traditional.

"This report shows that companies can serve both their interest in healthy profits and their customers' interest in healthier eating," said James S. Marks, MD, senior vice president and director of the Health Group at the Robert Wood Johnson Foundation, which funded the report.

The report used companies' annual reports and data from market research firms to assess same-store sales, total store sales, total food and beverage servings and customer traffic. It used those figures to assess overall performance as it related to sales of lower-calorie items. Same-store sales is a measurement that tracks the sales revenues of stores that have been open for at least one year. Total servings refers to the number of times a specific menu item was ordered.

This report follows one from 2011, also authored by Cardello, that examined the business impact of selling better-for-you foods and beverages among consumer packaged goods companies such as PepsiCo, General Mills, Nestle, Kraft, Coca-Cola, and Campbell Soup. That report found that companies with higher-than-average sales coming from better-for-you products showed superior sales, operating profits, and company reputations.

"The bottom line is that it's good business to sell more lower-calorie and better-for-you products," said Cardello. "This holds true for major food and beverage companies and for restaurants."

Washington-based Hudson Institute is a nonpartisan policy research organization dedicated to research and analysis. The mission of its Obesity Solutions Initiative is to bring about practical, market-oriented solutions to the world's overweight and obesity epidemic.