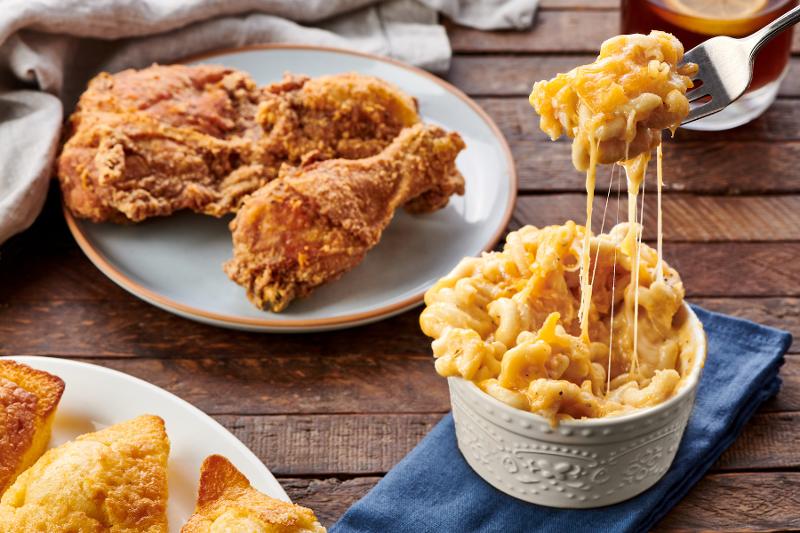 Fried chicken and Mac and cheese are among the top sellers./Photo courtesy of Cornbread Farm to Soul.

An IHOP franchisee since the tender age of 27, Adenah Bayoh said she used to get some very specific requests from guests.

“My restaurants are typically in underserved, marginalized communities, and my demographic was very different,” she said. “So I was getting requests like, ‘Can I have grits and cheese? Can I have liver and gravy?’”

And, in the early days, she added some of those dishes to the menu at her IHOP units, because that’s what the customers wanted.

At least until IHOP intervened.

“They were pissed,” said Bayoh. “They were like, ‘You can’t be selling catfish, and grits and eggs on our menu. That’s not who we are.’”

Bayoh on the demand for soul food

But Bayoh realized she had tapped into something. There was clearly demand for dishes that many remember their grandmothers serving—dishes found in mom-and-pop soul food restaurants, mostly in the South, and rarely at a chain restaurant.

And that’s why Bayoh created Cornbread Farm to Soul, a fast-casual soul-food concept that debuted first in Maplewood, N.J., in 2017 and will soon have four locations in the New York/New Jersey region.

It’s also a concept she plans to franchise, because Bayoh believes now is the time to bring soul food into the modern restaurant setting.

Bayoh on paying homage to an overlooked culture

In fact, Bayoh said she has applied the Chipotle model to soul food. But, by that, she doesn’t just mean fast casual.

Cornbread may be serving grandma’s recipe for fried chicken, fried catfish and mac and cheese, but the restaurants are tech forward, with self-ordering kiosks, strong digital and off-premise sales and reliance on third-party delivery.

The menu, created by co-founder Elzadie Smith, includes minimally processed dishes made from scratch in restaurants, Bayoh said. The chicken is raised without antibiotics. The yams are peeled and cooked in house, and vegetables like cabbage and collard greens are slow simmered.

Bayoh said Smith, who is originally from Tifton, Ga., uses food as her “love language.”

“I say to everyone, do not come around Miss Zadie if you don’t want to eat,” Bayoh said.

At Cornbread, the top seller is fried chicken, which is also served in a chicken-and-waffles combo. Plate meals with a protein and two sides are roughly $20-$25 and everything is served with cornbread. For dessert: Apple pie or peach cobbler.

The recipes are updated somewhat for health purposes, she said. The greens are made with just onions and pepper—no pork— with salt kept to a minimum.  And offerings include baked chicken, turkey wings and ribs.

Restaurants range from about 1,800 to 2,500 square feet. The largest opened recently in Brooklyn, N.Y., and Bayoh said the restaurants are “doing Chick-fil-A and Shake Shack numbers,” though she declined to offer specifics because of franchising disclosure limitations.

Bayoh is determined to build a franchise system that will appeal to female operators, in particular.

“We have a huge supporting cast of women” in the restaurant industry, she said. “One of the things I know from my own personal experience is that one of the best ways into ownership in the system is through franchising. It has allowed me the opportunity to not make so many mistakes.”

Bayoh on drawing women into franchising

Bayoh owns four IHOP units, which she calls “her babies.” When she first stepped into ownership at age 27, she believes she was the brand’s youngest franchisee.

Born in Liberia, Bayoh came to the U.S. at age 13 and was raised in New Jersey, describing herself as a proud product of public schools and public housing.

Now Bayoh is on a mission “to make a few millionaires,” she said, in part by helping her employees move into ownership.

Cornbread is not alone on the path of building a franchised soul food chain.

The brand Celebrity’s Soul Food, with offices in Florida and Beverly Hills, Calif., appears to have three units, according to its website. The concept has a broader menu and a higher price point, with dishes like chili-glazed salmon ($22), demi-glace braised oxtail ($35) and an Entourage Pineapple Bowl with herb-butter garlic shrimp and chicken, saffron purloo and rice in a Creole butter sauce ($22).

Bayoh said she welcomes the competition.

“The more the merrier,” she said. “There is this demand for soul food, and, the way I look at it is that we know we have the opportunity to do this, but do it right.

“I want to be a beacon,” said Bayoh. “My vision is to grow Cornbread across America and to make this a successful business run by a Black woman.”