Let us share the experiences of accommodating what were once health extremists, because my world is fast becoming yours. 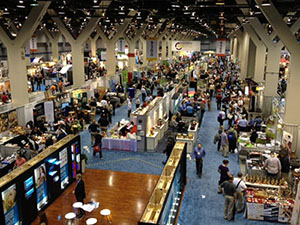 If you think seitan is a province of Cambodia, you’re probably oblivious to the pain that has been mine for 27 blissful years. Being married to a vegetarian who wouldn’t consider anything remotely indulgent, never mind animal-sourced, I’ve had to navigate menus that would keep a permanent thought bubble of bacon above your head. In reality, it means eating replacements like bean burgers, tempeh, tofu-based meat replacements, and the filet mignon of analogs, seitan. Olive oil is viewed as the equivalent of cake frosting.

Based on the conversations I’ve had during minus-one days to the National Restaurant Association’s annual convention, you should start thinking about how you can offer the same sort of menu options. Twenty-four hours before the official opening of the show, I’ve spent an inordinate amount of networking time in discussions of meatless, salt-less, dairy-less, an utterly unprocessed (if not uncooked) options for mainstream menu items.

Even when the conversation didn't stray into those zones, the talk repeatedly gravitated to concepts with a definite health halo, if not a foot in the health camp--chains  like Zoes Kitchen, Veggie Grill, LYFE Kitchen, and that non-restaurant that specializes in restaurant-caliber fare, Whole Foods.

Among the new hot sellers that chain executives said they're seeing: quinoa bowls, or salads and sides where sweet potatoes are key (and we're not talking fries here.)

I’ve met at least two suppliers who are attending the show because they sell what were once fringe-products, but are on the cusp of going mainstream. Think soy milk, natural soup bases, or alternative beverages to sip with your tempeh stir fry.

My conversation mates weren't people in ponytails and Birkenstocks; these were mainstream restaurateurs who see their customers veering considerably to the left, or foodservice vets who learned the business pitching mainstream products abounding in sugar, salt or fat. Now they’re betting a career on opportunity in the health market.

What were once fringe preferences for restaurants have by all accounts gone mainstream, judging from the conversations of the last two days. Tomorrow I’ll test that theory by seeing what health options I see on the show floor.

Stay tuned. Stop by as you munch your seitan burger with organic greens.