The busier parts of the Boston metropolitan area are notorious for the parking challenges they pose to visitors. When Beat Hotel, a brasserie and bar in Cambridge, Mass., opened last year, it provided valet parking from Day One. “We primarily decided to offer valet because we live in New England where weather can be cold and unpleasant in the winter and very hot in summer,” says co-owner Bertil Jean-Chronberg. “We want our guest’s experience to be seamless from start to finish.” 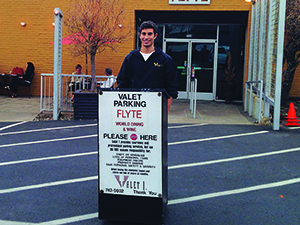 Jean-Chronberg, also the general manager for The Beehive, an eclectic eatery and bar in the South End area of Boston that has been offering valet for seven years, estimates that guests pay between $15 and $25 for parking. “Valet service would be extremely expensive for the customer if the restaurant did not take on the part of the responsibility of this operational cost,” he says. He won’t disclose specific figures for Beat Hotel’s or The Beehive’s share of the cost, but says that restaurants in the Boston area typically spend between $2,000 and $7,000 per month to offer the service. Without the subsidy, customers would be on the hook for much higher valet fees, which could discourage them from choosing the restaurant. “I don’t think customers realize that restaurants participate financially in this service,” says Jean-Chornberg.

Valet as value-add. The expense of offering valet needs to work out in a restaurant’s favor. “Like anything else, this is a guest amenity. A restaurant needs to decide if this amenity will drive revenue,” says Jean-Chronberg. The answer for Beat Hotel is a definite yes, he says. “We are extremely motivated to accommodate our local community, but our restaurants have always been destination locations for tourists and foodies from New England, across the U.S., and internationally as well,” he says. He says valet is necessary to maintain the restaurant’s reputation for service and make it easy for out-of-town guests to patronize the place.

Shopping for service. Scott Atkinson, co-owner of Flyte World Dining and Wine in Nashville, Tenn., interviewed both large and small valet companies when searching for a provider; being in a large city, it wasn’t difficult to find many options. He went with an independent local company. The costs turned out to be competitive with larger valet companies, Atkinson says, but the personalized service from the owner tipped the scales. “I was more interested in having someone I could call on their cellphone, rather than going through a company where I would have to fight through to get to someone at the top, if I had a problem,” he says.

Unlike Boston, Nashville is a town where restaurant customers don’t expect to pay much for parking, says Atkinson. Valet parking at Flyte is gratuity-only for customers, and Atkinson says that the majority of his guests opt to use the service. He figures, on average, he spends about $800 a month to offer valet at Flyte. “It would have cost us more to keep a person or two on staff to do it,” he says. The service spares him the expense of managing extra employees and paying for added insurance. And his customers have come to expect valet as an amenity.

Customers may especially expect free valet parking when the restaurant is in a remote location. “There are some places that are located in areas with very limited parking. If they didn’t offer valet service, they would be dead. If they didn’t charge for it, it would eat them alive,” says Atkinson.

Flyte’s contract with the valet company specifies that the valet service (and its insurance) is responsible for any incidents, such as a car getting towed or a fender bender. “We’ve had very few issues over the years,” says Atkinson, which is a big reason Flyte has stayed with the same valet operator since the restaurant opened seven years ago. Any restaurant that signs with a valet provider needs to be clear on who handles complaints and liability issues, Atkinson says, so that the restaurant is not exposed to unexpected costs, should something happen to a customer’s vehicle.

Beat Hotel has valet service every night from 6 p.m. until 1 a.m., but not every restaurant needs valet on every evening. “A restaurant can focus on providing the service on busy nights and opt to not offer it on slower evenings,” Jean-Chronberg suggests.

Flexible spending. Atkinson has made adjustments to Flyte’s valet service over the years to deal with changing economic times. At first, the service was available every day. During the recession, he scaled it back. Now, the restaurant’s operations manager makes a call on a day-by-day basis, depending on need. This gives the restaurant the flexibility to bring on extra valets for busy nights or send valets home early when it’s slower. A typical weekend crowd at Flyte can be handled by one or two valets. The last impression guests have upon leaving the restaurant is a polite and prompt valet that only costs a tip, Atkinson says. “I’ve never had a complaint about offering free valet parking,” says Atkinson.