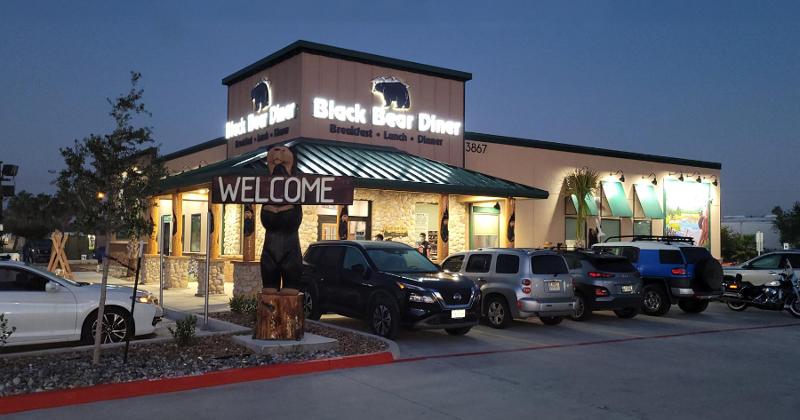 At the start of 2020, Black Bear Diner was in the midst of a great eastward expansion. Since 2016, the Redding, Calif.-based chain had been opening about 20 new restaurants a year as it grew from its West Coast stronghold as far east as Arkansas.

Then the pandemic hit and put a stop to that, as it did for many growing brands, and Black Bear was forced to shift its attention from adding restaurants to protecting the ones it already had.

It focused on helping franchisees, who operate 84 of its 144 diners, abating royalties and taking other measures to help them stay afloat. And it embraced delivery and pickup, which had been a more passive business pre-pandemic.

Today, all of its restaurants remain intact. Dining room volumes are back to 2019 levels, while off-premise remains elevated, accounting for about 20% of total sales. The chain is now eyeing average unit volumes of up to $2.9 million, compared to $2.6 million before the pandemic.

“We feel we’re in a position of strength,” said CEO Anita Adams in an interview with Restaurant Business.

The chain will use that momentum to start growing again. It plans to open 15 to 20 new restaurants in 2022, with a particular focus on Texas, where it already has nine stores.

“It’s a healthy economy for sure,” Adams said of the Lone Star State. “We feel like we fit there.”

A new Black Bear in the South Texas city of Brownsville in October was one of the chain’s most successful openings ever, she said, and additional stores are slated for Dallas and San Antonio.

Black Bear is also looking to sign up new franchisees to help fuel its move east. After growing steadily with existing partners, “we’re now what I’d say going on the offense,” Adams said. The chain in June hired Chad Corrigan as VP of franchise sales and development and has re-tooled its franchise website and marketing to attract new operators.

“We feel like there’s no reason why this couldn’t be a coast to coast national brand.” —Anita Adams

Black Bear faced a big question when it was getting ready to expand behind an investment from PWP Growth Equity in 2016: Would the California concept translate elsewhere in the U.S.?

Black Bear Diners have a log-cabin feel and a bear theme, beginning with the large, carved bear totems that welcome guests to every restaurant. Inside, the brand prides itself on hospitality and “all-American fare” across all three dayparts.

“There’s nothing necessarily California-esque about us,” Adams said. And the unique appearance of the restaurants tends to draw people in. “There’s always a lot of trial initially when we go into new markets.”

For those reasons, Black Bear is confident that its frontier stretches all the way to the Atlantic. It has its eye on Florida, Tennessee and the Carolinas in particular.

“We feel like there’s no reason why this couldn’t be a coast to coast national brand,” Adams said.

While new restaurants will retain Black Bear’s rustic vibe, they will also reflect the increasing importance of off-premise. The chain is adding a second makeline in the kitchen dedicated to takeout orders. And to ease congestion near the cash register, new stores will have a pickup window inside the first set of doors so takeout customers can grab and go without ever entering the restaurant. The idea is to better service to-go business without disrupting the dine-in experience.

Older Black Bears will be retrofitted with the same adaptations, Adams said.

Customers’ to-go behavior tends to mirror that of dine-in in terms of both what they order and when: All three dayparts are equally busy, and breakfast dishes leave the kitchen all day long. That’s one reason the chain is adding a second makeline.

“We find [at-home customers] order just as much breakfast as the guests who order in,” Adams said. “Guests are not deterred from ordering their favorites.”