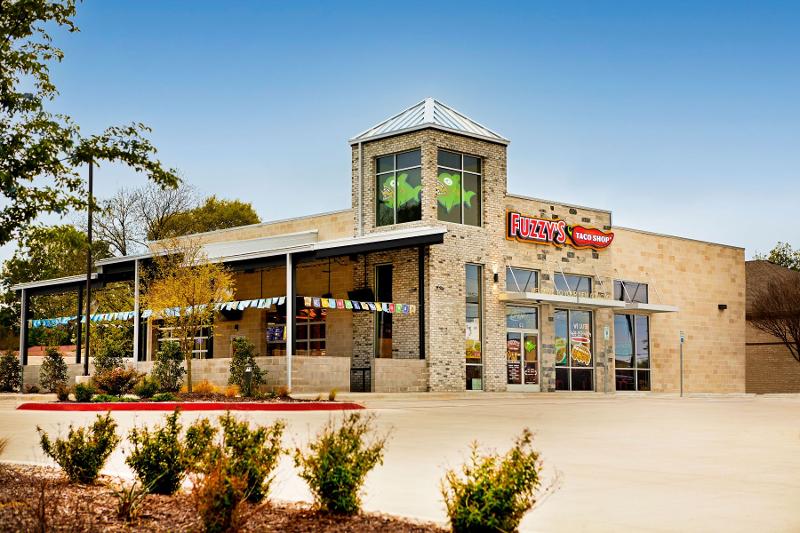 The owner of Applebee's and IHOP is buying Fuzzy's Taco Shop for $80 million. / Photo courtesy of Dine Brands Global.

Dine Brands is finally getting its third concept.

On Monday, the owner of Applebee’s and IHOP, which has been expressing a desire to acquire a third concept for years, finally pulled the trigger on one, agreeing to acquire Fuzzy’s Taco Shop from NRD Holding Co. for $80 million in cash.

Dine believes this will give it a growth chain and its first limited-service concept. The fast-casual Mexican chain was founded in Fort Worth, Tex., in 2003 and is on pace to generate $230 million in system sales this year, which would be up 8% from 2021. Same-store sales for the brand are up 3% through October this year.

Franchisees operate 98% of the chain’s locations and it had $1.5 million average unit volumes last year, according to data from Restaurant Business sister company Technomic. Fuzzy’s has deals in place that would double its current unit count, Dine Brands said.

“Fuzzy’s Taco Shop is a compelling business with a loyal customer base and a distinct identity,” John Peyton, CEO of Dine Brands, said in a statement. He said Fuzzy’s is “an attractive asset with a tremendous growth trajectory.”

He also said that it would be a “complementary addition to our highly franchised portfolio.”

Dine Brands executives have said on multiple occasions that it would consider an acquisition of a third concept.

The deal comes 15 years after the company was created when IHOP acquired Applebee’s for $1.9 billion and a plan to refranchise the entire concept.

The company first indicated a desire to acquire a smaller growth concept in 2017 under then-CEO Stephen Joyce. Peyton, named CEO in 2020, picked up the mantle. He said in 2021 that the company would look into a third brand.

“When we do think about it, we’ll be looking at a tuck-in acquisition, certainly enough that it’s accretive, but with the potential to grow to the size of our current brands or close to it,” he said last year, according to a transcript on the financial services site Sentieo.

It will get a brand with a broad menu of Mexican items with a “Baja twist,” including breakfast, burritos, salads, quesadillas and beverages. It also serves alcohol, including margaritas and beer.

Fuzzy’s CEO is Paul Damico, a 35-year industry veteran who had previously worked with Focus Brands and Global Franchise Group. Fuzzy’s management team appears to be tabbed to remain. “We are eager to work with Paul and his leadership team as we execute on accelerating Fuzzy’s growth,” Peyton said.

In an investor presentation, Dine Brands said that “this size and type of deal can represent a compelling” merger and acquisition model for the company, but that it has “no current plans for any additional transactions.”