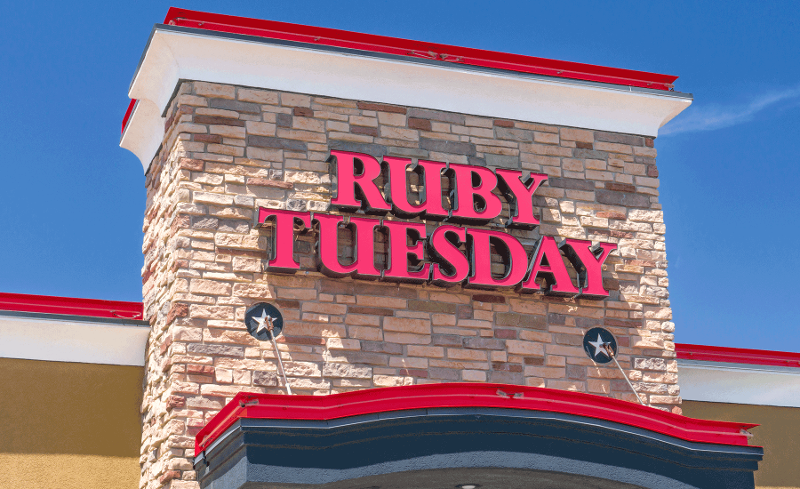 Few restaurant chains can boast of a history as colorful as the “Game of Thrones” installment that’s been Ruby Tuesday’s past. Few, arguably, would have wanted all that drama. It’s a tale packed with strange bedmates (think cafeterias, and almost Pizzeria Uno), hubris, heated rivalries, heroic moves that backfired, and a throne that wouldn’t stay occupied. Few brands have encountered such controversy over dish shapes and the color of servers’ uniforms, much less what role a salad bar should play. But few ventures born out of an emerging trend have remained in business for 48 years in business, as the venerable casual-dining brand can brag.

The story hit a low this week when Ruby Tuesday filed for Chapter 11 bankruptcy protection, citing the challenges thrown its way by the pandemic. Court documents show the operation owes $62 million to lenders, landlords and suppliers, even after closing 185 units during the COVID crisis. But the brand has been struggling for years.

Its start was a much happier time. Ruby Tuesday was founded in 1972 by a University of Tennessee student named Sandy Beall, who took the name from a song by the Rolling Stones, still a band that frightened parents at the time. According to the lore, the 21-year-old Beall secured $10,000 from a Pizza Hut operator he knew and added another $10,000 of his own money and contributions from four fraternity brothers.

At the time, one of the highest-volume concepts in the restaurant industry was a quirky full-service brand called T.G.I. Friday’s, king of what was then known as the fern bar segment. It focused on young singles who embraced its emphasis on cocktails and a menu of dishes their parents would never try. Beall decided to open a restaurant similarly catering to the young, with a different day of the week in its name.

The first Ruby Tuesday opened near the Knoxville campus of Beall’s university, and proved popular enough to spawn sister stores elsewhere. When the venture hit the 16-unit mark, Beall sold the brand to Morrison’s Cafeterias, a heritage foodservice brand in the South, but remained in charge of his brainchild. The reported price was $15 million in cash and stock in Morrison’s, which had diversified into foodservice management and a few restaurant brands of its own.

With Morrison’s deep pockets, Ruby Tuesday grew quickly, becoming a major contender along with brands such as Friday’s, Bennigan’s, Chi-Chi’s, Red Lobster and Cork & Cleaver in what would come to be known as casual dining. Like those operations, all of which featured a swinging bar and table service, Ruby offered a step up to Baby Boomers who had grown up on fast food and diner fare.

The marriage with Morrison’s would last for 14 years. During that time, Ruby’s sibling concepts grew to include Tia’s Tex-Mex, Mozzarella’s, Silver Spoon Café and L&N Seafood. Beall ran them all as CEO of the restaurant group, which was spun off as a separate public company in 1996. According to individuals privy to Beall’s deal-making activities, the company was set at one point to add Pizzeria Uno to the fold, but Ruby Tuesday’s godfather decided at the last minute to hold off on the acquisition. Beall would sell off all the brands except Ruby Tuesday within four years.

But the single-brand strategy wouldn’t last long. With the fast-casual segment exploding, Ruby Tuesday bought an Asian entrant called Wok Hay. By then, the Ruby Tuesday brand was starting to flag as its clientele aged and the markets around older stores changed. It was also beset by new competition from more polished casual concepts such as The Cheesecake Factory, Seasons 52, P.F. Chang’s and Fleming’s. It recast Wok Hay as a full-service operation and experimented with its use as a replacement vehicle for flagging Ruby Tuesday units.

It also developed or secured rights to several polished-casual brands. Its homegrown concept was Marlin & Ray’s Seafood, and it tinkered with a high-end brand called Truffles.

Ruby itself was nudged considerably up-market. The emphasis shifted away from burgers, ribs and the salad bar, all signatures of the brand, to far more ambitious fare, including lobster tails. The restaurants were also upgraded to look and feel more contemporary. The dishware was replaced with trendier square plates, and new flatware was adopted. Servers switched to all-black ensembles and were trained to suggest a wine that paired well with a customer’s entrée. Leather banquets and exposed wood were installed to make the concept feel more like some must-visit independent in a big city.

The experimentation also included nods to changes in consumer perceptions. With health emerging as a weightier concern, Ruby decided to reveal the calorie counts of the items on its menu. This was long before governments were even close to requiring the disclosure of nutritional information, and the voluntary posting truly set Ruby Tuesday apart.

But the information also prompted hardcore customers to rethink their usual orders of burgers or ribs, and sales of those big movers dropped. Ruby quickly reversed its decision and took the nutritional info off materials available at the table, though it was still available through other means.

Regulars were no more appreciative of the concept’s decision to shift higher up the dining spectrum. Traffic and sales fell off as longtime fans bemoaned the trendier menu and reminisced about the once-showcased salad bar. They stopped coming, and new, younger customers balked at eating where their parents once knocked back screwdrivers under a stained-glass skylight.

The brand’s upscale moves weren’t helped by the nation’s near-simultaneous plunge into the Great Recession, when value became the rallying cry for much of the industry.

Not giving up on the limited-service sector, Ruby became a licensee of Lime Fresh, a regional fast-casual Mexican concept that promised scratch prep and all-fresh ingredients. It was often likened to a next generation Chipotle Mexican Grill. The promise led to Ruby’s purchase of the concept in 2012, as conditions with its core brand were rapidly deteriorating.

It also kept its options open by turning one Ruby Tuesday restaurant into a franchise of the Jim ‘n Nick’s barbecue chain but found little promise in a long-term relationship.

End of the Beall era

Beall retired as CEO in 2012, surrendering his stewardship of the brand for the first time in 40 years. He was succeeded by JJ Buettgen, a longtime casual-dining veteran who’d most recently headed marketing for Darden Restaurants, the parent of Olive Garden and The Capital Grille.

Buettgen waited what seemed like a few seconds before reversing Ruby Tuesday’s shift toward fine dining. While the ink was drying on his new business cards, the chain introduced hand-breaded chicken tenders, scrapped the all-black uniforms, and started working on a return of the salad bar.

The company’s secondary brands would go one by one. Lime Fresh was the last alternative option closed, with 11 units shut and the remaining eight locations sold to Rubio’s in 2015 for $6.3 million.

But the moves failed to win back alienated Ruby Tuesday customers, forcing 95 of what was then the chain’s 646 branches—13% of the system—to close. The company was losing money at a jaw-dropping clip. Under considerable heat from shareholders, the board asked for Buettgen’s resignation. It got it in September 2016, and longtime casual-dining veteran and former Boston Market chief Lane Cardwell was brought in as interim CEO until a permanent replacement for Buettgen could be found. The board also revealed that it was looking for a buyer of the chain.

Jim Hyatt, a seasoned quick-service executive with a reputation for turning operations around, got the nod as new CEO several months later.

He never should have bothered unpacking. Hyatt’s appointment was announced in April 2017. In October, Ruby announced that it was being acquired for $335 million by NRD Capital, a private-equity firm formed and run by a former franchisee of several quick-service brands, Aziz Hashim. By that time, the casual chain had been whittled down to about 599 stores.

Hyatt was out and Hashim was in as CEO by December 2018. In a flash, Hashim turned over the job to Ray Blanchette, who had tried in vain to build a stable of casual concepts after a long career at TGI Friday’s. Nine months later, Ruby Tuesday announced that Blanchette was returning to Friday’s as CEO, and the company searched for its seventh CEO since 2012.  Shawn Lederman would be in the job when Ruby Tuesday filed for bankruptcy on Oct. 7.

Meanwhile, units continued to close. From a high point of 840 restaurants a decade earlier, Ruby Tuesday entered 2020 with 451 domestic branches. “It’s no big secret that the business plan for Ruby Tuesday from the day we bought it was to cull the weaker units,” Hashim told RB’s Jonathan Maze in late May. At that point, said Hashim, the restaurant count fell somewhere between 270 and 300, a situation he described as “fluid.”

He warned of a “blood bath” for all of casual dining if landlords wouldn’t budge on rent charges during the pandemic. Overdue rent was identified as one of the big IOUs for Ruby Tuesday when it filed for Chapter 11 protection.

Lederman said Ruby Tuesday will use its bankruptcy to reposition the brand for long-term stability as it rebounds from the wallop of the pandemic. An announcement of the filing described the short-term plan as “business as usual.”

“This announcement does not mean ‘Goodbye, Ruby Tuesday,’” Lederman said in the press release.