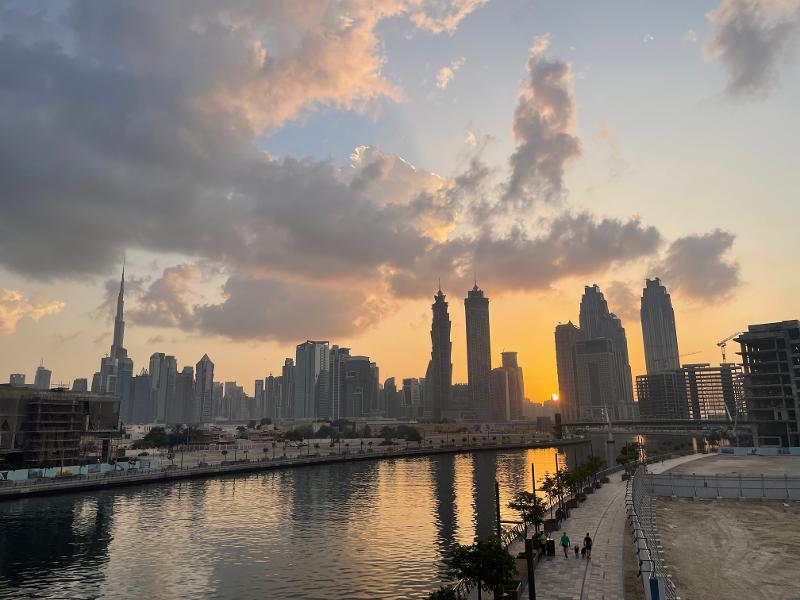 The Global Restaurant Leadership Conference in Dubai emphasized the importance of global expansion for many western brands. / Photo by Jonathan Maze.

Despite a slew of challenges, international markets bounced back for U.S. restaurant companies in 2021, helping drive considerable growth for some of the world’s largest chains.

That is one of the key takeaways from the recently concluded Global Restaurant Leadership Conference in Dubai. The three-day event is owned by Winsight LLC, parent company of Restaurant Business.

Sales for U.S. brands outside the country rose 24% in 2021, according to RB sister company Technomic. By contrast, U.S. sales last year grew by 16%. “International markets are a priority,” said David Henkes, senior principal with Technomic.

Few brands demonstrate this trend quite like Burger King. The Miami-based burger chain struggled in the U.S. last year, with total system sales up just 3.9%, compared with 13.4% for top competitor McDonald’s, for instance. KFC’s U.S. system sales grew at just a third the rate that it grew outside the U.S.

At least some of this is rooted in weaker sales in international markets for many chains in 2020. Yet the U.S. is a more mature market. Many of these brands have reached plateaus domestically, either via unit count, same-store sales or both, as competitive pressures make growth more difficult. International markets are more plentiful, lack the level of competition and have economies that are growing faster, such as China or the Middle East.

As such, companies like KFC, Burger King and Domino’s are now bigger internationally than they are in the U.S.

Still, these companies face some challenges in the near-term as global economies hit a snag. Europe is expected to face a tougher recession than anything the U.S. experiences next year. Wendy’s, for instance, has over the past 18 months invested heavily in company-run units in the United Kingdom, only to watch that country fall into an economic malaise. For many brands in China, such as Starbucks, “zero-COVID” strategies have hurt sales.

Yet the rest of the world remains a fruitful market for many U.S. concepts.

“It’s nothing compared to war.” Fyodor Ovchinnikov, who started Dodo Pizza 11 years ago in a tiny town in Russia, admitted that the past few months have been tough on his business, the result of global reaction to his country’s invasion of Ukraine.

“It’s been tough for Russian businesses, but I can’t complain because it’s nothing compared to war,” he said.

He added, however, that “relationships are more important than international citizenship,” and that he’s faced a “lot of challenges” before and got through them.

Transparency matters. Ovchinnikov got his business started by writing a blog and telling people everything, including sales and profitability. The blog was popular and helped his business grow. So he’s kept it up as the company has grown into a franchise with more than 800 locations in 16 countries. He publicizes the financials of all his company’s locations.

“I have a strong belief that transparency makes us stronger, better and more efficient,” he said. It also helps attract operators. “For a franchise company, transparency is the greatest promotion,” Ovchinnikov said.

So do relationships. Franchise operators around the world had many of the same supply chain challenges as operators in the U.S., with shortages, price increases and delays on various pieces of equipment. But operators also said that fixing those problems comes down to relationships.

“In the hard days, you always work together, and you solve problems together,” said Korhan Kurdoglu, the CEO of Turkey-based TAB Food Investments, which has built supply chains for brands in Turkey and China.

That helps Jollibee, which operates 6,000 restaurants around the world and used its scale to ensure it can get enough supplies.

And many operators set up strategies to substitute for suppliers when they couldn’t get enough items. Blaze Pizza, meanwhile, had GPS trackers placed in delivery trucks so operators knew when they were going to get supplies in.

Operators also said the issue still presents challenges. “I don’t think we’re out of the woods yet,” said Bill Keffer, general manager of the JW Marriott Marquis in Dubai. “Next year is going to be really interesting for all of us.”