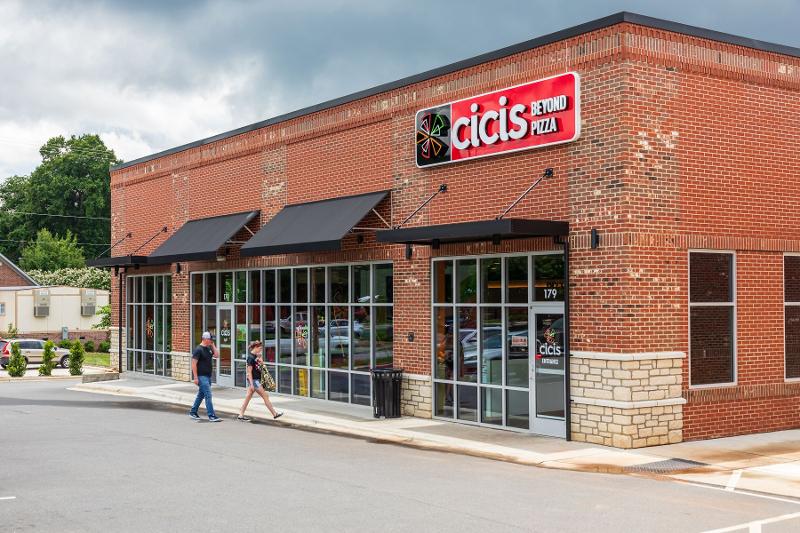 Cicis Pizza emerged from bankruptcy protection this week, less than two months after it declared Chapter 11, with new owners and a hope that consumers will return to the dine-in service in which it specialized before the pandemic.

The Irving, Tex.-based chain was sold to D&G Investors in a credit deal. The group was formed by Applebee’s franchisee SSCP Management and Mooyah Burgers owner Gala Capital Partners. It acquired Cicis' $82 million in debt before the filing and converted that debt to equity in the sale process.

They will take on a brand that is considerably smaller than it was before the pandemic, and which was shrinking even before then.

Cicis operates just over 300 locations, or about 25% fewer than the 420 it operated at the end of 2019, and about half of where it was at the chain’s 2009 peak. Cicis system sales in the five years going into the pandemic averaged a 2.4% decline, according to data from Restaurant Business sister company Technomic.

The new owners, however, believe that operators running the brand are in solid shape. With new owners and a different capital structure, they believe the brand can quickly get back to where it was once the economy normalizes. “The model still works,” said Chris Dharod, a principal with SSCP along with Sunil and Puja Dharod. “We like the brand. We like the economics. The franchisees have good businesses themselves.”

SSCP and Gala have taken on brands before. SSCP acquired the Roy’s Restaurant chain from Bloomin’ Brands in 2014. Gala Capital was among a group that acquired Mooyah in 2017. Both chains appeared to stabilize in 2019 after earlier struggles.

The new owners said that their ability to refine unit-level economics will help Cicis. They also believe their history as franchisees will come in handy, too, given that Cicis is largely a franchised concept.

“Chris, Sunil and I are franchisee-focused leaders that share very similar principles in how we nurture and grow franchise systems,” Anand Gala, managing partner of Gala Capital Partners, said in a statement. “We are geared towards nurturing the success of our franchisees on a local level.”

In addition, Gala said, the new owners see “an enormous opportunity to use the proven business model Cicis has and expand on it to grow the franchise system to its potential.”

Dine-in pizza chains have in general struggled in recent years as consumers have shifted more of their consumption of the product to delivery. That accelerated during the pandemic. Pizza Inn, another buffet chain, saw its same-store sales decline as much as 39% last year. They were still down 18% in the last three months of 2020.

Pizza Hut, historically a dine-in chain, has been quickly closing those units, replacing them with delivery and takeout locations.

Cicis could use its value proposition—its buffet generally costs $6—while banking on a return of customers to dine-in service. Several traditionally dine-in chains are hoping for “pent-up demand” to get customers back in the door as restrictions ease coming out of the pandemic.

“We think COVID’s not here forever,” Chris Dharod said. “COVID will be gone. The business will return to what it was.”