As Domino’s found new and more innovative ways to get pizzas to consumers over the past decade and generated often-ridiculous sales in the process, its executives worried about contentment.

“Our biggest concern was how we keep from becoming complacent,” said Domino’s Chief Technology Officer Kelly Garcia. “We are risk-takers because we want to fight complacency.”

Domino’s response was to build a two-story, 33,000-square-foot facility, just outside the unnaturally long building that houses its headquarters on the Domino’s Farm campus in Ann Arbor, Mich.

There, amid a small herd of bison, is where the company is pushing forward. It houses multifunction teams that work on new technologies, such as voice automation, autonomous delivery, GPS driver tracking and other strategies the company hopes will quickly find their way into more locations.

This forward push is important to Domino’s, maybe now more than ever, because it faces mounting competitive threats—not just to its delivery business but also to its technological advantage. Complacency now could have major consequences.

“The more things we can be trying at once, the greater the likelihood we’re going to find something that’s the next big thing,” Garcia said. “We encourage and celebrate risk. If you’re not taking risks, ultimately you become complacent.”

A change in attitude

In 2009, Domino’s changed its pizza recipe, famously admitting that its previous version was bad in a series of ads featuring the tagline, “Oh yes, we did.”

That tagline was even more important, internally. “This really started to change our company,” said Dennis Maloney, the company’s chief digital officer. “It put a very big exclamation point on the fact that we’re changing. It changed how we thought of ourselves internally.”

That’s when Domino’s began thinking of itself as “an e-commerce company that sells pizza,” Maloney said. “We would be good with data, not afraid to fail and operate with a speed closer to Amazon than a pizza brand.”

The company already had the foundation. Domino’s had created its own point-of-sale system called Pulse years earlier and convinced franchisees to adopt the system, giving it control over the base piece of technology.

It also convinced two disparate groups of employees—marketing and IT—to work together, something they traditionally did not do. “The two groups work through everything,” Maloney said. “They spend a ton of time together. They’re closely integrated and work hard to maintain that relationship.”

The result was a string of technology improvements that worked well for marketing purposes, helping establish the company as an innovator.

Digital orders now account for about two-thirds of the chain’s orders—it only introduced online orders in 2007. It added text ordering, Twitter ordering, ordering by car and by smartwatch. It added a “Domino’s Tracker” that enabled customers to track their orders, a feature virtually standard in the pizza business now.

It added a voice ordering feature called Dom and enabled customers to order pizza without even touching a button. That one was initially difficult for the makers of Android and Apple phones to accept.

“They never actually conceived of an app that would place an order without the customer actually doing anything,” Maloney said. 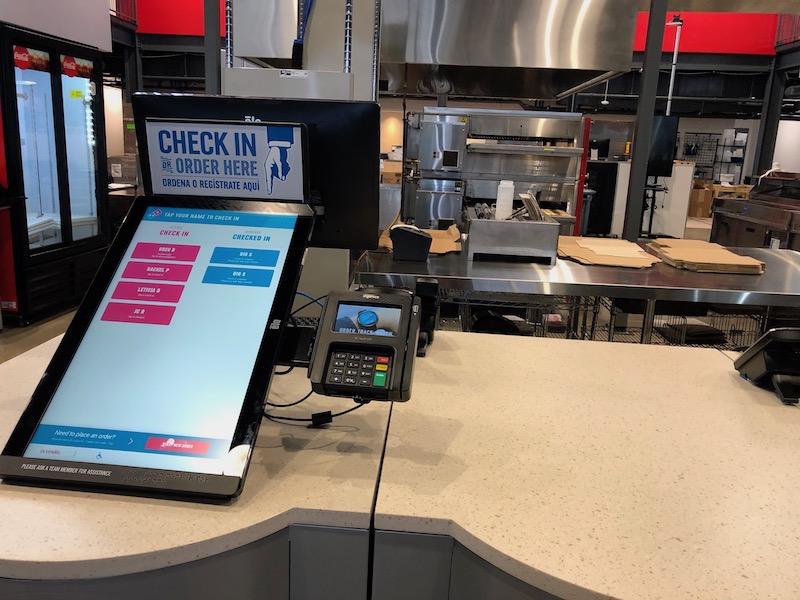 As Domino’s succeeded, operators remodeled stores and the company generated more carryout sales. Same-store sales surged, growing year after year and taking the company’s average unit volumes to $1.15 million from just over $600,000 over the course of a decade.

But that also brought in competition. Third-party delivery services emerged four years ago and have grown considerably this year. Suddenly, every other restaurant chain was a potential delivery competitor and many of them were eager for the business.

And other large chains have figured out technology. McDonald’s, for instance, added new drive-thru technology and has established its own innovation space in Silicon Valley called McD Labs. Chick-fil-A and Wendy’s are experimenting with ghost kitchens, or dark kitchens, for delivery and takeout.

Domino’s same-store sales have taken a hit, slowing for six consecutive quarters. The chain’s 2.4% same-store sales in the third quarter was its weakest in seven years. The company acknowledged that some of that was due to the presence of third-party players—though some was also due to the chain’s own “fortressing” strategy, designed to increase carryout orders and improve delivery times.

Domino’s executives have decided to avoid using third-party services, like competitors Papa John’s and Pizza Hut have done. The company delivers more quickly, profitably and efficiently. It also controls all of the customer data—an underrated but vital element in the business. 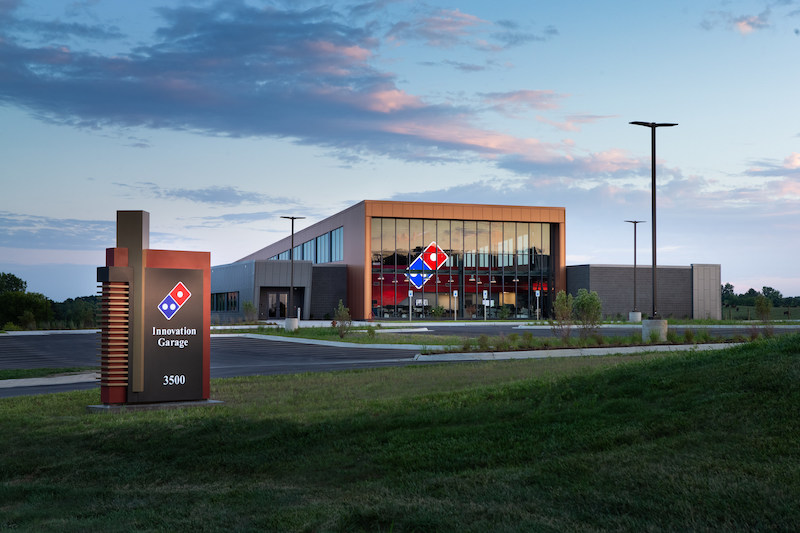 The building features a giant Domino’s logo inside, clearly visible through two-story glass walls. At night it lights up so brightly that it can be clearly seen from the freeway nearby. Local officials wouldn’t let the company put a logo on the outside of the building so they put it inside.

The innovation garage features a full Domino’s “pizza theater” in the center of two stories of offices. All of the equipment in the theater is on casters so it can be moved and changed.

A nearby shelf features several pieces of equipment that can be used to order pizza, including an Amazon Echo, Google Home, Samsung TV, an iPhone and a tablet. Employees can place orders at one of them, and they go to the theater a few steps away.

Garage stalls next to the theater double as meeting spaces. Given the company’s tests of automated delivery vehicles, those stalls are important.

In the offices, employees work in multifunction teams on various projects. A team might have developers, marketing, operations, machine learning experts and data scientists, all working toward the same goal. “It’s not an IT building,” Garcia said. “It’s not a marketing building. It’s not an operations building.”

Failure is OK here. “We have to be willing to fail fast,” Garcia said. “We don’t have three years to get something right. We need to work in months, not years.” 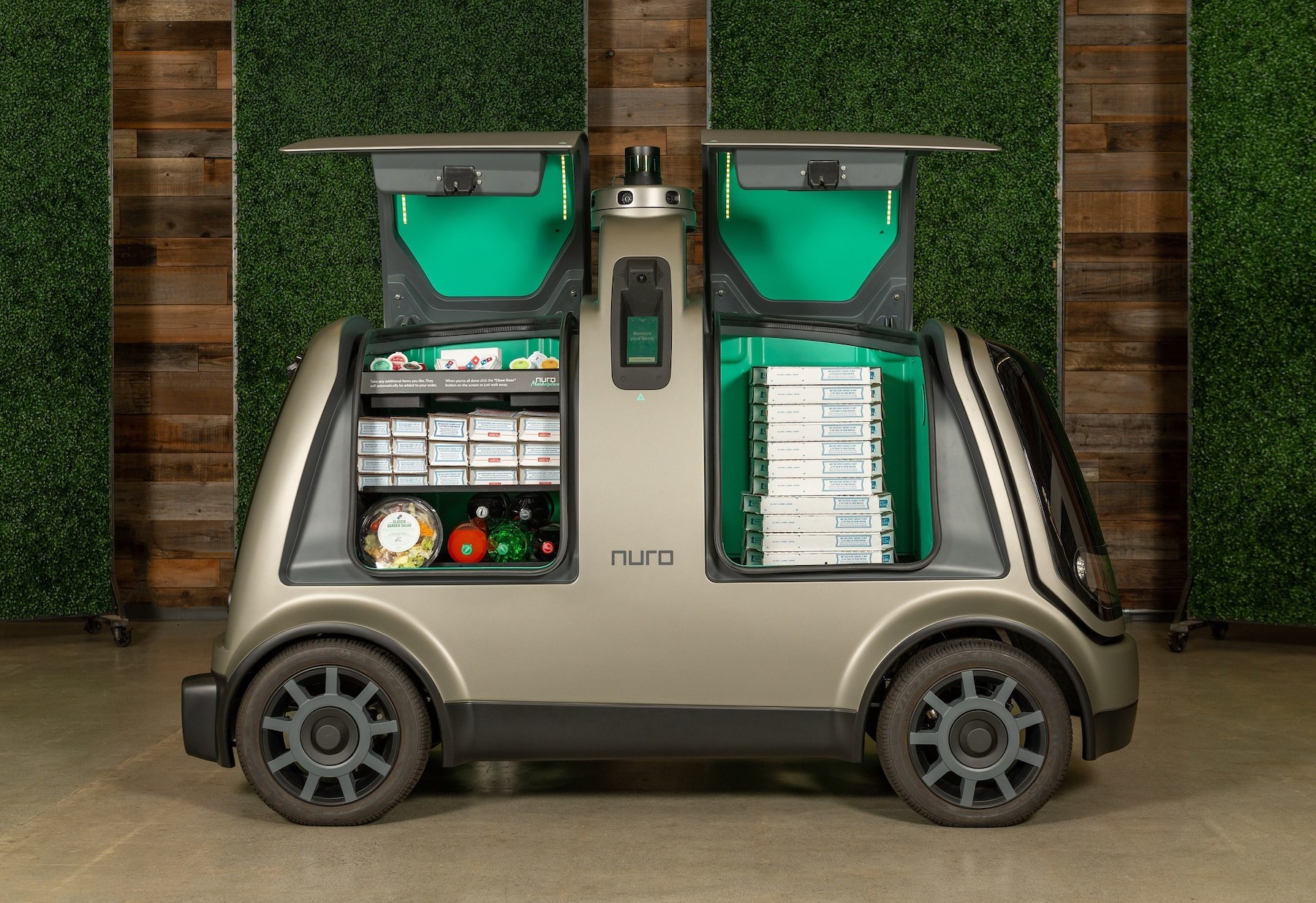 Based on the work presented at the garage, a lot of order taking and delivery in the future will be done by machines.

Even when you don’t know it.

In 2013, Garcia and Maloney went to the Domino’s board and presented an idea: Voice ordering through the app. At the time, only Microsoft, Apple and Amazon were doing anything along those lines. That would put Domino’s at the forefront of a major technology shift.

The two executives thought that voice ordering would be the future because of the friction involved in typing over a smartphone.

Dom, the company’s voice ordering technology, has become the focal point of the next innovation: automated voice ordering. The company announced the strategy last year, and it is currently in 40 stores—meaning customers in those stores who place orders over the phone are talking with artificial intelligence and not a person.

“It’s complex to do,” Garcia said. “I’d argue that our bot is way ahead of other technology.”

Domino’s previously worked with Ford on autonomous vehicle delivery, testing the concept in a pair of markets. The company found that consumers are receptive to getting their pizzas from a driverless vehicle.

Those tests provided the foundation for its current test, using electric delivery robots from the robotics company Nuro. Those robots are a much better solution, Allison said, because they’re much smaller and therefore more efficient.

Domino’s plans to roll out robot delivery in Houston at one store this year. “This is the future of our company,” Maloney said. “This fundamentally changes our business model.”

Indeed, labor remains a huge challenge, and with so much competition for the delivery business, drivers are at a premium. “We’re struggling to find enough drivers,” Maloney said. “The minimum wage is going up. All that changes with an autonomous vehicle.”

The company has other strategies, too. Some stores have self-order kiosks for carryout orders, enabling those customers to add to their orders or start a new one. It also has GPS tracking of drivers in about 400 locations and plans to roll that out to more locations soon.

That technology not only lets customers track the location of their delivery driver, similar to what third-party services offer, it helps managers track the drivers too. That helps them prepare the next orders set to go out for delivery, which improves efficiency.

Not every piece of technology is developed here. Next to the pizza theater was three e-bikes that are being offered to Domino’s franchisees right now. That innovation actually came from a franchisee in the Seattle area who thought the electric bikes would be better for employees rather than manual bikes. 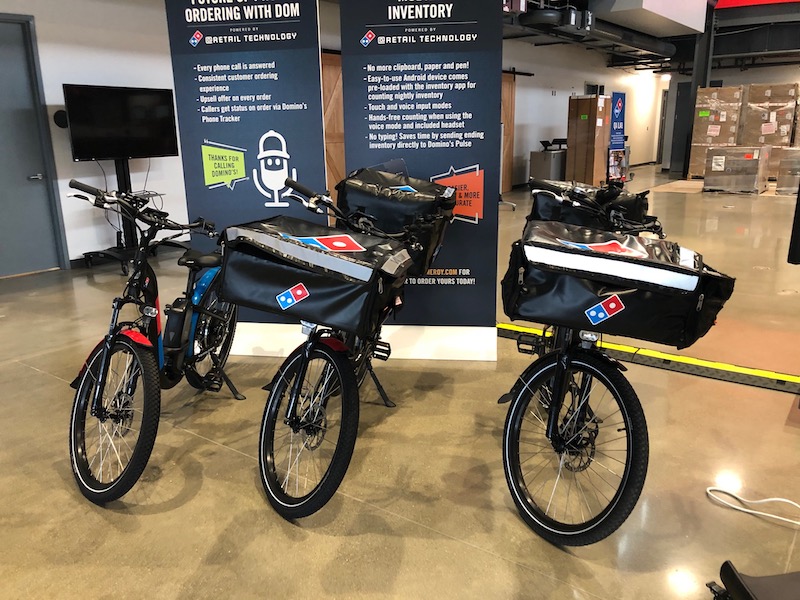 For all of Domino’s work on automation, the company has limits. Actually, it has a very clear line that it will not cross.

During a tour of the company’s campus, a group of reporters and bloggers were given a quick lesson on pizza making.

We scraped the dough out of the container, rolled it in a perfect circle in a pile of cornmeal on the counter before topping the dough with sauce using a “Spoodle,” a flat-bottomed, straight-handle ladle that enables for the sauce to be spread. The sauce surprisingly proved to be the toughest part of the process.

Then came 5 ounces of cheese and a wide selection of toppings that, at least in the U.S., does not include anchovies. The pizzas are then put on a conveyor belt that moves through the oven, coming out finished on the other side.

Corporate employees, right up to the CEO, all learn how to do this in “Pizza Prep School,” along with everything else involved in operating a store. It’s part of a two- or four-day course that takes place in the Domino’s location at the base of the company’s headquarter office.

That basic process, where humans make the pizzas, won’t change.

“As long as I’m the CEO here,” Allison said, “we will always make our pizzas by hand.”

Everything else, apparently, is fair game.