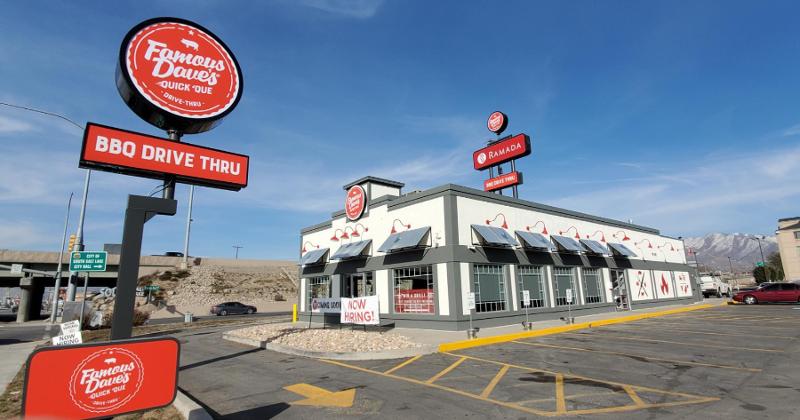 Under CEO Jeff Crivello, Famous Dave's has experimented with new formats such as drive-thrus. / Photograph courtesy of BBQ Holdings

BBQ Holdings, which over the past two and a half years has been one of the most active buyers in the restaurant business, this week found itself on the opposite end of a deal.

On Tuesday, the equally acquisitive MTY Food Group said it was buying the owner of Famous Dave’s and eight other concepts for $17.25 a share, or approximately $200 million.

The deal bolsters Canada-based MTY’s position in the U.S. and marks a turning point for BBQ, which began with a single Famous Dave’s restaurant in 1994 and has since become a multiconcept group with more than 300 locations.

But the new ownership will not change BBQ’s recent strategy under CEO Jeff Crivello, who was installed at Dave’s in 2017 after a revolving door of executives worked to resuscitate the then-floundering sit-down barbecue chain.

The former financier oversaw improvement at Dave’s and then turned it into the centerpiece of what is now known as BBQ Holdings, which began buying up other brands in 2020.

Over that time, Crivello has consistently harped on the company’s three pillars for growth: organic new unit openings, filling latent restaurant capacity with ghost kitchens and virtual brands, and M&A.

A sale, he said in an interview on Wednesday, was never part of the plan. “But as a public company, you always run the risk of somebody bidding for the company,” Crivello said. “The board has a fiduciary duty.”

Crivello will remain with Minnesota-based BBQ under MTY’s ownership, he said—and the three pillars will stay in place.

In fact, being part of MTY will likely enhance them. One of BBQ’s signature strategies has been to mix and match its brands with the aim of squeezing more revenue out of a single restaurant. In May, for instance, it opened its first co-branded Granite City/Village Inn location, and it has been selling Bakers Square pies out of some Famous Dave’s stores.

MTY, which owns a whopping 80 brands encompassing 6,660 restaurants in North America, gives BBQ that many more options to play around with.

“With 80 brands, there’s just a lot that we can fold together,” Crivello said. “All the pieces of the puzzle are on the table.”

BBQ has been on the hunt for a pizza chain to pair with its other concepts, for instance. The take-and-bake Papa Murphy’s brand could very well fit that bill. Beyond that, MTY’s restaurant collection runs the gamut of formats, segments and cuisines.

And, in general, the additional resources and scale provided by the larger company could help BBQ accelerate its growth, Crivello said.

It will also make BBQ a private company for the first time in more than 25 years, which the CEO said is a welcome change.

“As a restaurant company, it’s best to focus on what you do, and that’s operate restaurants, and less on presentations to the board and shareholder and investor calls and those things,” he said.

In the first quarter, BBQ reported same-store sales growth across all of its brands, including 8.6% at franchised Famous Dave’s. But its restaurant-level operating margins at company-owned units shrunk by nearly 3 points, to 6.4%, due to food and labor inflation. At the time, BBQ expected to grow its footprint from 315 total locations to 366 by the end of the year.