In restaurant kitchens, oils are used for deep-frying, sautéing, salad dressings and baking. Traditionally, purchasers considered the oil’s end use, smoke point, flavor and cost to spec a product. Now health concerns are a priority as well. 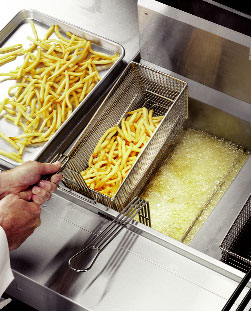 Historically, most restaurants used partially hydrogenated corn or soybean oil or vegetable oil blends for frying. Hydrogenation raises the smoke point, creating stability and enhancing performance at high temperatures.But the process also creates harmful trans fats. When these came to the forefront as a health issue several years ago, operators scrambled to find zero-trans-fat oils that delivered the same results.

Meanwhile, the industry was scrambling to come up with cost-effective products that offered the functionality of hydrogenated oils without the drawbacks. Dow AgroSciences was one of the first with its Omega-9 Oils—a “next generation” zero trans fat product made from NEXERA canola and sunflower seeds. “Through plant breeding, we were able to naturally decrease the unstable portion and increase the Omega 9 portion to make a naturally stable oil that’s equal to [partially hydrogenated] soybean oil in its frying capabilities,” says David Dzisiak, global oils leader at Dow AgriSciences. These oils also boast a longer fry life and a light, clean taste. Four manufacturers currently market the Omega-9 Oils under their own brand names: Bunge Oils (Nutra-Clear NT), Canbra Foods Ltd. (Canola Harvest HiLo), Ventura Foods (Mel-Fry Free Canola) and ACH Food Companies (Frymax ZT).

Other trans-fat-free oils have been developed or promoted with some of the same attributes. Low-linolenic soybean oil under the Asoyia label is one example. It has a long shelf and fryer life, making it an economical choice. And cottonseed oil is being marketed as a trans-free, stable oil with a high smoke point and neutral taste. But Dzisiak contends that the oil industry is shifting away from soybean oil as the demand for ethanol drives up corn acreage and drives down soybean crops. And as cotton production shrinks in the United States, the supply of cottonseed oil won’t be able to keep up with demand. On the other hand, canola farmers are doubling production and Dow predicts there will be 1 billion pounds in 2009.

Although the Omega-9 oils are a bit costlier than hydrogenated soybean oils, “you might get seven to nine days use in the fryer compared to three to five days for french fries,” says Dzisiak. “Look at what you spend per month on oil rather than per jib or per pound. Even though these oils may cost more initially, they are cheaper in the long run.”