For the past 30 years, marketing folks and ad agencies suggested to Peter Cancro that he appear in video or television ads for the brand he owns, Jersey Mike’s. The generally media-shy CEO always said no. “I didn’t want it to be about me,” he said.

Like many things, Cancro’s resistance was a victim of the pandemic. So, in March of last year, after the country went on lockdown, he appeared in an ad, simply urging people to “make a difference in someone’s life.”

“I felt compelled,” Cancro said. “It was a ‘we-got-to-do-something’ type thing.”

He’s appeared in ads for the chain ever since. Coincidentally or not, Jersey Mike’s sales have taken off. According to data from the most recent Technomic Top 500 Chain Restaurant Report, Jersey Mike’s was the 10th fastest growing big chain in the U.S. last year. Its system sales rose 19.6%.

But that doesn’t tell the full story. Of the 10 largest sandwich chains, only three of them managed to hold serve last year: Arby’s, which has drive-thrus and grew by 8.5%; Firehouse Subs, which recovered as 2020 went on and saw system sales rise 0.9%, and Jersey Mike’s. The rest of them pulled back, including the sector’s 500-pound gorilla, Subway, where sales plunged 18.5%, and Jimmy John’s, where sales fell 8.5% despite operating its own delivery network.

The Cancro ads likely helped. So did an early-pandemic 50% offer that Cancro says he is still apologizing to its franchisee base for the way it drove customers into its stores. But Jersey Mike’s performance last year was rooted in its early use of technology, a quick decision to jump enthusiastically on the third-party delivery bandwagon and Cancro’s eager willingness to go against franchisor convention by doing something so bold as to pay for franchisee remodels.

Let’s start with Cancro’s unconventional thinking on paying for franchise remodels and technology. In 2002, Jersey Mike’s decided to use a single point-of-sale system for its entire concept, then around 200 locations.

Rather than work to convince franchisees to buy the equipment themselves—which most franchisors do—Jersey Mike’s paid for the equipment and sent it to operators.

It’s a tactic the company has continued to employ. When the company decided to retrofit its more than 1,800 locations last year, it paid for those retrofits itself, which cost about $75,000 per restaurant or $175 million systemwide.

The key element here is speed. Jersey Mike’s expects the retrofits to be finished by July, a remarkably quick timeframe even for an 1,800-unit chain—remodels usually take years to complete even in the most aggressive of scenarios. Operators have to get financing and many will wait until they’re required to get it done.

For Jersey Mike’s, the results are simple: It gets a quicker benefit to same-store sales and a faster payoff in the form of higher royalty payments, not to mention happier franchisees. Cancro expects to get a return on that $175 million in 3.5 years.

“Everybody says ‘I can’t believe you’re so generous,’” he said. “OK, thank you, but it was the absolute best business case we’ve ever made.

“It was a great investment on our part.”

Technology, and notably that aforementioned move into a single POS system almost 20 years ago, has also played a huge role.

If one thing has come out of the pandemic, it was the need for easy-order takeout options. Companies that did the most to integrate technology into their businesses before the pandemic outperformed those that were behind the curve.

The company overhauled its wireless app, which made its debut in June 2019 and Cancro says Jersey Mike’s has spent “billions” on investing into technology.

It inked deals with just about any delivery company it could find and integrated them early into its POS system, a move that simplified operations but also expanded delivery at a time when it became vital to restaurants’ survival. It also raised prices on those orders because customers would pay them and its operators couldn’t simply swallow the delivery fees.

“Starbucks and Domino’s, they’re tech companies,” Cancro said. “So are we.”

The numbers speak for themselves. Online ordering is up 186% over the past four quarters, Cancro said. Third-party delivery is up 125%. Same-store sales have improved from a 25% increase in the last three months of 2020 to a 40% increase so far in 2021.

“We were in the right place at the right time with digital,” Cancro said. 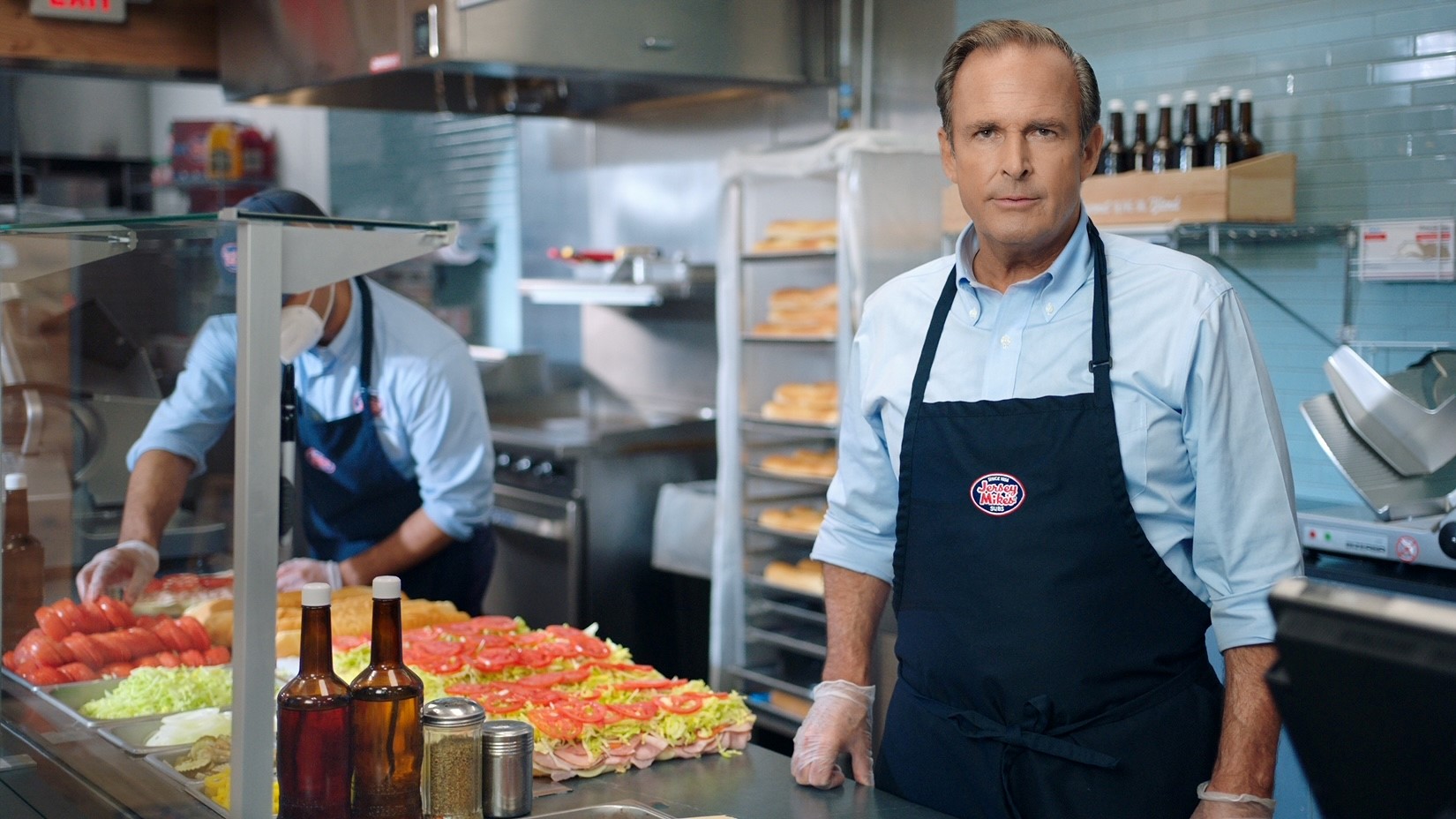 Marketing is also important. For Jersey Mike’s the biggest marketing piece is its annual Day of Giving, in which shops donate proceeds from the day to a charity chosen by the local market—there are some 200 charities that receive donations from that day’s work.

In 2019, that day generated $7.3 million worth of donations. Last year, the event wasn’t held due to the pandemic. But Jersey Mike’s brought it back again this year, expecting $8.5 million.

It instead generated $15.6 million. Employees give up their tips and franchisees donate everything they ring up for the day, Cancro said. “It’s really taken on a life of its own at this point,” he said. “It’s not mandatory. But all the owners do it.”

“The marketing experts will tell you that cause-based marketing is what you should be doing,” Cancro said. “Ok, I guess we’ll keep doing that then.”

Which brings us back to the ads. Don’t expect Cancro to become the next Dave Thomas now that he’s appeared on video. “I’ll fade back out now again but come back in when I see the need,” he said. Jersey Mike’s expects to donate sales in November to the hunger relief organization Feeding America, much like it did last year, and that could get Cancro on the air. He also mentioned the 2,000th store opening, expected soon given the chain’s roughly 10% annual unit growth.

As for maintaining the chain’s momentum from the past year, Cancro is realistic. He suggests slowing sales this year as comparisons grow difficult—the 20% same-store sales growth for the year implies a clear slowdown in the second half.

And then it becomes a fight again. But Cancro has a plan for that, too, though it’s pretty basic. “We got to get enough meat on the sub, we need speed of service, we’ve got to have clean restaurants, we’ve got to share our life with the customer,” he said. “Blocking and tackling. We’ve got too cover the basics. That’s what you’ve got to stay focused on. If you do that, keep putting out a great product, fresh, high quality, that’s how you’re going to keep it.