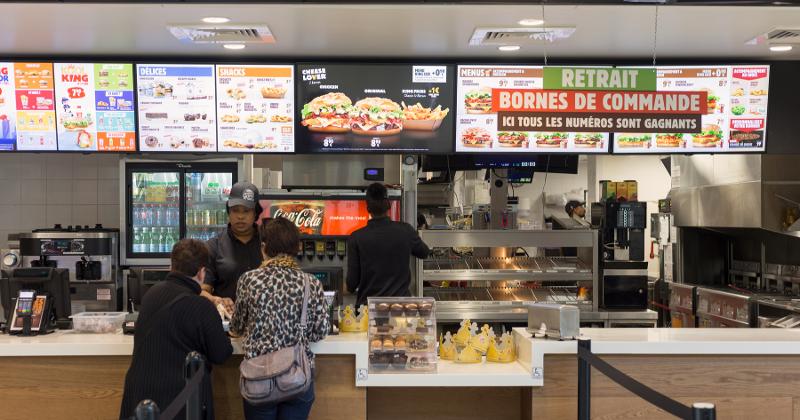 It’s a different story internationally, however. Same-store sales outside the U.S. rose more than 20% for the brand. That was a boon for the company, given that nearly 60% of its system sales now come from global markets. The sales resurgence was stronger than expected, company executives said, and the result more than offset weakness at some of the company’s other brands and in other markets.

Burger King isn’t alone. International same-store sales at many fast-food brands have thrived early this year despite a host of challenges, including surging omicron infections, China’s renewed lockdowns and Russia’s invasion of Ukraine.

Same-store sales at Pizza Hut and KFC outside the U.S. have risen 10% not including China, where both brands have a massive presence. Taco Bell, which is gradually picking up steam outside the U.S., said same-store sales internationally rose 12%. System sales, which factors in all sales generated by all stores, rose 37% in the quarter.

Many of these brands have invested heavily in their international development in recent years, believing that these markets could offset slowing domestic growth to generate stronger sales. Many of the largest U.S. fast-food brands, including KFC, Burger King and Domino’s, have larger presences internationally than they do in the U.S. Those that don’t have plans to increase the size of their global presence.

Taco Bell has a far smaller presence outside the U.S. than any of these other concepts but has been focused on it more recently. And Yum China, Yum Brands’ giant operator in that country, has committed to growing the brand there. The brand has focused on building out a few key markets, which increases brand awareness and improves growth, Yum CEO David Gibbs told investors.

International growth had been expected to be weak, given problems in Russia and China and surging omicron infections at the beginning of the year. Russia’s invasion of Ukraine led many brands to pull out of the country or stop supporting development there. The closure of McDonald’s locations in Russia and Ukraine cost that company $127 million in the first quarter, for instance.

Those restaurants represented 2% of McDonald’s systemwide sales last year, but the closures came late in the quarter and their impact on the brand was “negligible,” CFO Kevin Ozan said.

China has been another problem. The country has a “zero COVID” policy and has reinstated aggressive lockdowns there as the omicron variant kicked in. At KFC, for instance, system sales in China declined 4% in the first quarter. By contrast, system sales rose 37% in Europe and 40% in the Middle East.

At Starbucks, which has focused intently on growing its business in China, same-store sales in the country plunged more than 20%. Roughly a third of the chain’s stores are temporarily closed or are limited to delivery and mobile order and its remaining stores are under strict safety protocols.

Still, Schultz said, “The China business is going to be bigger than the U.S.”

Many of the coffee giant’s international markets generated record revenues, however, and total sales for Starbucks outside of the U.S. grew 4% in the first three months of 2022.

As for why, the reasons go simply back to many of the same explanations for the improvement in the U.S. business last year. Major chains have spent heavily to invest in digital and delivery in international markets, and as those markets have opened, customers returned to dine in.

“The off-premise business that grew quite significantly through the pandemic has stuck, or at least so far remains quite sticky, and on-premise is coming back,” Cil said. He added that kiosks at many Burger King locations have helped alleviate order pressure inside the restaurants.

“That on-premise growth is what’s driving some significant growth,” he said. “We feel confident long-term in our plans for those markets in the quarters to come.”