Restaurant chains are falling all over themselves to open more suburban locations.

KFC, on the other hand, is going in the other direction by targeting hundreds of locations in urban areas.

To be sure, the Louisville, Ky.-based chicken chain is opening plenty of suburban locations with one or two drive-thru lanes. But the chain is also taking a hard look at the urban areas where its restaurants are underpenetrated—particularly after more than a decade of store closures.

The company opened the first of its urban inline design locations in New York in late 2019. It has six more restaurants planned in various markets and with various franchisees this year and six more for 2022. Ultimately, Chief Development Officer Brian Cahoe said, the goal is to develop “hundreds” of locations in these types of markets.

“We’re not as penetrated in the urban core of the U.S. as we are in the suburban U.S.,” Cahoe said in an interview. “The runway is even greater there with the asset class.”

KFC operates just under 4,000 U.S. locations and has been largely shrinking for some time. Yet it has been pushing more growth and hopes that new menu items and sales strength can help it get there. The company believes it can add 1,000 locations and get back to 5,000 U.S. restaurants.

The chain’s system sales rose 4.3% last year despite closures. The chain has even more momentum now following the introduction of its new chicken sandwich—two-year same-store sales rose 19% in the second quarter.

That has KFC on a positive trajectory. The chain opened 19 new restaurants in the second quarter and year-to-date has added a net of three locations—putting it on pace to grow unit count for the first time since 2004.

Executives believe that the new sandwich could provide a “platform” for further innovation. But for someone like Cahoe it gives the brand access to new types of customers—and new markets that could make unit growth more accessible in the coming years.

Rather than simply focus on customers who want a bucket of chicken for dinner it can now gun for customers looking for a sandwich at lunch.

“We think we’re in an even better position from a menu standpoint,” Cahoe said, noting that the sandwich and fries combo works well in a “grab-and-go urban environment.” 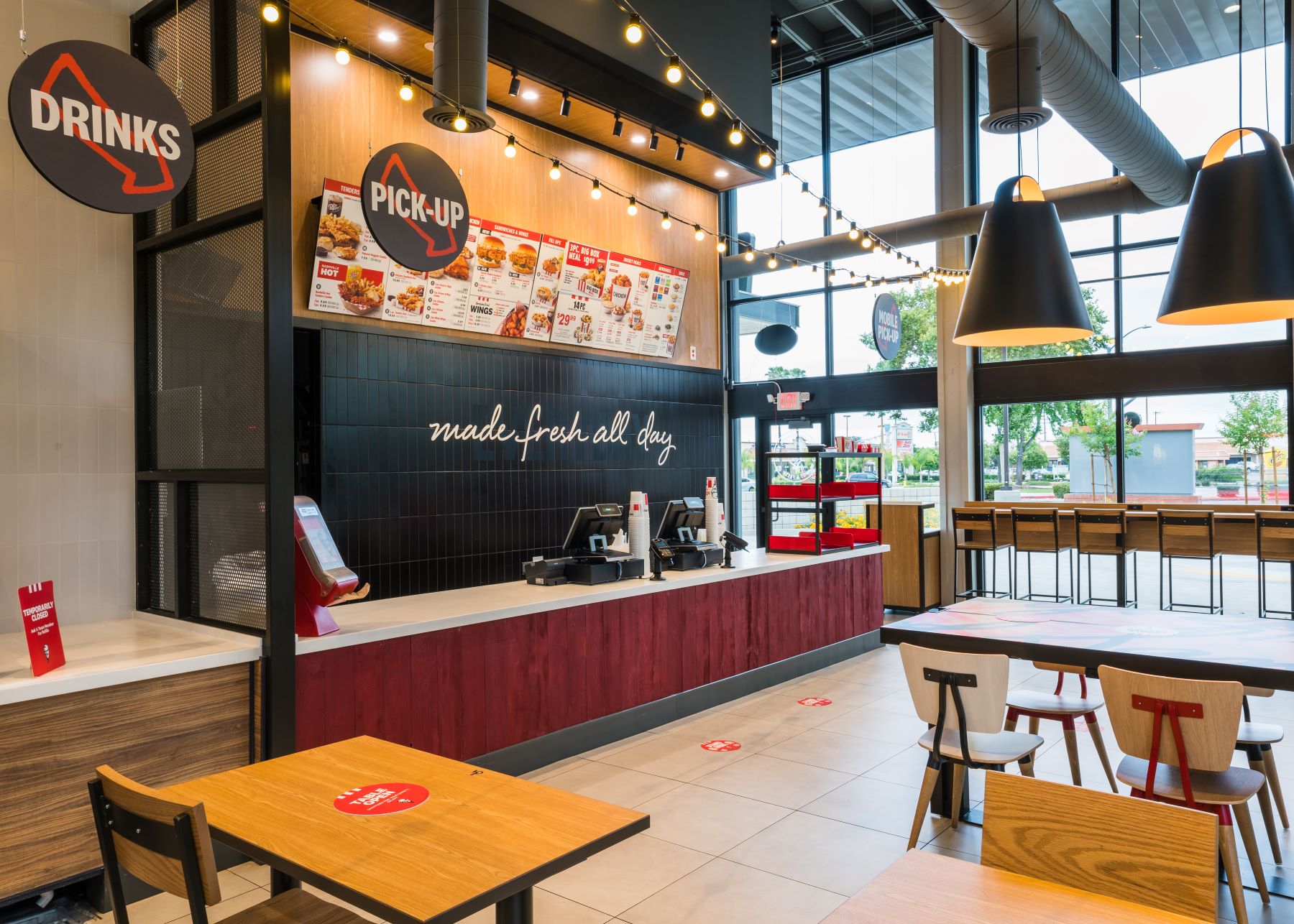 KFC is eyeing larger metro areas like Los Angeles, Chicago and New York but is also working on projects in smaller cities like St. Louis. “There’s also a role for lower-tier cities where in many cases we don’t have a presence and the consumer is underserved,” he said.

The inline locations generally will be geared for a more digital customer—urban stores have four to give times the digital mix as drive-thru locations. The chain is working to integrate digital orders throughout the restaurant and is testing digital interior menu boards and kiosks.

The layout is also designed so delivery drivers can pick up their order more quickly.

From a design standpoint, meanwhile, the locations will be somewhat unique, often adding design elements that reflect their environment. For instance, the location in New York’s Chinatown features Mandarin script and artwork not typically seen at a suburban KFC.

It’s important to note that suburban development with drive-thrus remains KFC’s bread and butter and will be the main driver of growth. Yet urban markets remain an untapped resource, one the chain hopes to tap more frequently in the coming years.

“Our bread-and-butter near-term will be freestanding drive-thru development,” Cahoe said. “But this channel of development can play a more meaningful role in our growth.”