Brian Cahoe, the chief development officer for KFC U.S., was sporting a white and red baseball jersey in his office on Tuesday morning. It said “Kentucky Fried Chicken” on the front and had a picture of a restaurant in the chain’s new “American Showman” design.

He wasn’t alone. Several other people at the chain’s Louisville, Ky., headquarters also wore one. The development team wears the jerseys to celebrate a new store opening, and this was the eighth time the team sported the shirts this year.

They plan to wear it a lot more.

That’s because KFC plans to do something in 2019 that it hasn’t done in 15 years: Add more locations than it closed. It hasn’t reached that milestone since 2004—when the chain added just one unit.

To do this, the chicken chain is providing incentives to operators who build new units. It is also finding new places to put new restaurants, focusing more on nontraditional locations and eyeing urban, inline locations the chain has abandoned in recent years—including New York City.

“We’re unified in our understanding that to be where we want to be as we go through the next phase of this turnaround, we have to get to unit growth,” Cahoe said in an interview. “Strong, healthy brands aren’t just growing sales and transactions, they’re shoring up their footprint.” 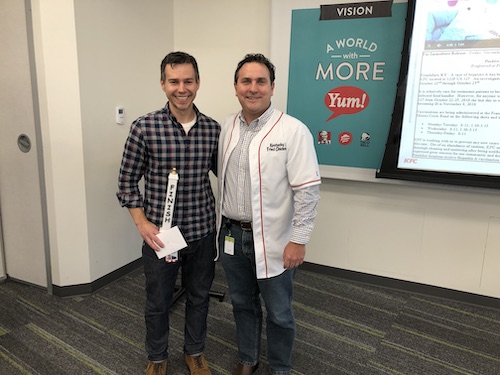 KFC’s U.S. unit has shrunk considerably since that last growth year. The chain has closed a net of 1,400 restaurants since 2004—more than a quarter of the restaurants it operated that year.

In the process, it has ceded its status as the largest chicken chain in the U.S. to Chick-fil-A in 2013.

Five years later, the chicken sandwich chain lapped KFC—it is now more than double the size of its once larger rival.

“The first two years of the turnaround is about comp growth and getting the brand economics healthy, which we’ve done,” KFC U.S. President Kevin Hochman said in an episode of Restaurant Business' podcast "A Deeper Dive," to be broadcast on March 13.

While the company has continued to lose more units than it has opened in recent years, the number has been shrinking. The chain had been losing restaurants at a rate of about 100 per year for some time but in 2017 the company shrunk by 58 restaurants and last year it contracted by 35 locations. Turning that number into a positive figure would be a major milestone.

The company does provide some incentives for operators to develop new units. KFC provides rebates that can total up to $300,000 depending on the restaurant’s performance. Cahoe noted that more locations have been reaching that cap—a signal that new restaurants are opening to strong performance. The restaurant that opened just this week broke sales records for a new location.

New restaurants are opening to stronger sales, Cahoe said, because of the brand’s momentum, its rotating Colonels ad campaign, better site selection and a strong design.

The incentives plus those sales have sped up development. “Our new builds are averaging considerably higher than existing restaurants to the point that it’s a no-brainer to build again,” Hochman said.

The company is also looking at new places to put its restaurants. That includes nontraditional sites such as airports, college campuses and other areas that have provided a fertile development ground for many chains, but which KFC has generally avoided. “We’ve just never even been there,” said Melissa Faurest, director of development for KFC U.S. “It was just not on the radar.”

That has changed. The company is focusing more intently on that channel for development. It helps that the KFC location in the Los Angeles International Airport is the busiest in the U.S. system, which Faurest said is “an eye-opening piece of information” for the company’s operators.

“If we are going to continue to put up the numbers we have the past couple of years and then get even bigger and bigger, then nontraditional has to be a substantial piece of that growth,” she said, noting that such locations can be opened without taking business away from existing KFCs.

The company also has high hopes for more urban markets. KFC plans to open a location in Bronx, New York, in the near future and is in talks with some existing operators to consider more urban, inline locations.

KFC had been in more urban markets but has pulled back over the past 15 years. And such markets could be fruitful targets for delivery orders—something KFC is focused on with parent company Yum Brands’ partnership with Grubhub.

But, while the chain has focused so much on new units, it is also working to keep closures to a minimum.

The company said that continuing to improve restaurant economics will reduce closures. But KFC is also looking at helping struggling units or working to get restaurants into the hands of different operators.

“We definitely work both sides of the equation very actively,” Faurest said. “Saving a closure the right way is just as important as opening a new restaurant.”

And maybe the combination of fewer closures and new restaurants can get the chain into positive territory.