McDonald’s lured more customers into its stores for the first time in five years, finally putting an end to a difficult era that led to closed locations, overhauled management and a major change in the company’s direction.

The Oak Brook, Ill.-based burger chain said that its U.S. same-store traffic rose 1%. The last time it generated more customers inside its more than 14,000 domestic stores was 2012.

That said, the company was coming off of some easier comparisons—a year ago, same-store sales declined 1.3% in the U.S.

And since its traffic began falling in 2012, McDonald’s cumulative traffic decline is 9.3%—meaning a typical location is serving nearly 10% fewer customers than it did in 2013, even with last year’s increase. 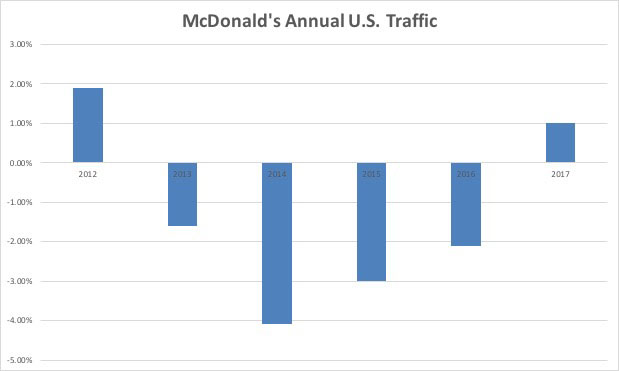 Over that period, McDonald’s hired Steve Easterbrook as CEO, reorganized the company, dramatically cut general and administrative spending, added all-day breakfast in the U.S. and undertook several new initiatives around the world.

And the company’s improved performance has generated enthusiasm among investors, who strongly backed McDonald’s stock in 2017, leading to a 40% increase in its share price.

The company goes into 2018 with a host of initiatives designed to generate further sales increases.

That includes its new $1 $2 $3 Dollar Menu, which is expected to lure more customers seeking value offerings. The company is also replacing its frozen Quarter Pounder patties with fresh beef that is made to order. And it is gradually adding kiosks, called Experience of the Future, while bringing delivery to many of its restaurants and adding mobile order and pay.

“2017 was a strong year for McDonald’s, and customers responded to the many ways we are making their experience more convenient and enjoyable,” Easterbrook said in a statement. “We served more customers more often, achieved our best comparable sales performance in six years, gained share in markets around the world and made tremendous progress with growth platforms such as delivery, mobile order and pay and Experience of the Future.”

The company said its net income declined 41% to $698.7 million, or 87 cents per share, a decrease due to the Tax Cuts and Jobs Act of 2017. The company said a higher tax bill hurt earnings by 84 cents a share. Revenues in the fourth quarter declined 11% to $5.3 billion due largely to the impact of refranchising.