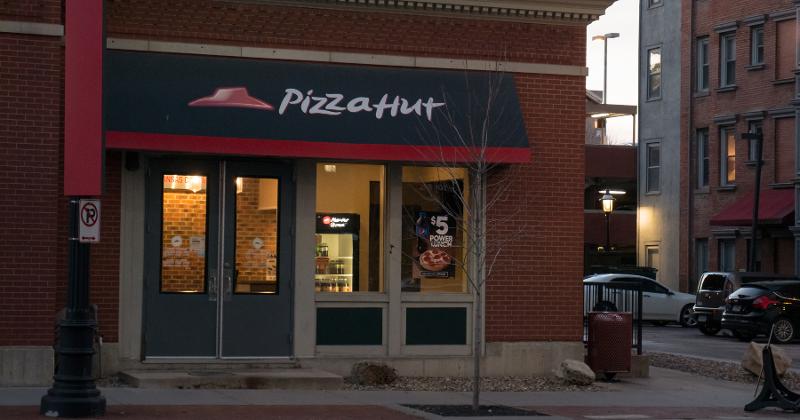 Pizza Hut is starting to use third-party delivery services to help boost its business. / Photograph: Shutterstock

Pizza Hut is finding out that life as a delivery-focused brand is not quite smooth sailing.

The pizza chain, which only recently completed its shift from the primarily dine-in brand of the 1980s to a more modern takeout concept, watched its sales momentum dissipate in recent months, largely because of a lack of drivers. On Wednesday, the company said its U.S. same-store sales declined 6%.

“This was driven by staffing challenges,” David Gibbs, CEO of parent company Yum Brands, told investors on Wednesday, “mainly from delivery driver shortages that have been felt across the industry.”

As such, the chain is turning to a familiar idea, using third-party delivery companies both to get new customers and to help provide delivery when times get busy.

Papa John’s began using aggregators in 2019 after its own sales problems made it difficult for the brand to get drivers. Other pizza delivery chains have been using them, too, to help offset staffing shortages.

Nor is the company alone in watching a lack of drivers eat into momentum. Domino’s Pizza, which had overtaken Pizza Hut recently to become the world’s largest pizza chain, watched as a lack of drivers halted its seemingly unstoppable same-store sales growth two of the last three quarters. It, too, may consider using third-party delivery.

The problem for pizza chains is simple. There are far more driver jobs than there are drivers. A broad-based labor shortage has made it difficult for a large swath of industries to find workers. But the growth in companies like third-party delivery services, rideshare companies and delivery businesses like Amazon has made it even tougher to find drivers.

With a lack of drivers, pizza concepts have reduced hours and delivery times have increased, which has sapped sales. At the same time, overall demand could be easing as consumers return to normal—Pizza Hut’s same-store sales peaked in the first quarter of 2021, for instance, at 16%. Even with consumers supposedly still ordering delivery, it would have been difficult for the chain to best those numbers.

Pizza Hut is taking several steps to offset these challenges. Gibbs said the company is focused on improving staffing levels. It is restoring operating hours, increasing the availability of online ordering and it is using more call centers to handle dial-in orders.

The company is also testing its Dragontail delivery order management system at 100 locations in the U.S. Yum acquired the system last year but until now had largely used it in international markets. CFO Chris Turner said the company was “excited” by the early results and is “in conversations with our franchisees” to expand its use in the U.S.

But the company is also increasing work with third-party delivery companies, which executives say can help in two ways. First, Pizza Hut is working on white-label delivery, integrating it into its point-of-sale system and allowing for the services to provide delivery when it doesn’t have enough drivers itself.

Pizza Hut also has high hopes for aggregators’ own marketplaces. One large-scale Pizza Hut franchisee has started using aggregators to generate business, and executives said their sales have outperformed the entire system by “4 to 5 points.” For the system, that would take the -6% same-store sales figure to -1% or -2%.

The aggregators have their own customers, and using them can give pizza chains like Pizza Hut access to those customers.

Turner said that the company negotiates contracts so “our economics are roughly the same across channels.”

“The way we negotiate the economics in those deals in the U.S., we really are indifferent in terms of where the sales fall,” he said. “So we want to be there wherever customers want to do business with us.”

With the improved sales results from franchising using the aggregators’ marketplaces, executives believe other operators will soon get on board. “I think more and more are going to be choosing to move in that direction,” Turner said.