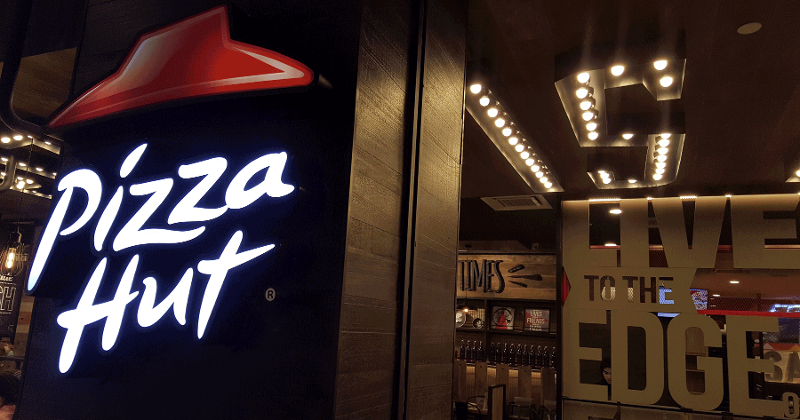 Pizza Hut’s same-store sales in the U.S. rose 6% in the third quarter, good for the pizza chain but not when you consider the performances of its primary rivals, Domino’s (17.5%) and Papa John’s (24%).

But Pizza Hut has its foot in a bucket in the form of a roster of dine-in units at a time when takeout and delivery have dominated.

The chain’s delivery and carryout same-store sales rose 21% in the quarter, executives said on Thursday. “Existing trends in the restaurant industry have just been accelerated,” David Gibbs, CEO of Pizza Hut parent company Yum Brands, said on the company’s third-quarter earnings call. “Like off-premise, like delivery, like ordering through tech. Pizza Hut is perfectly positioned for a lot of those trends.”

Pizza Hut has been closing dine-in units and replacing them with takeout and delivery locations for years. Consumers have increasingly grown accustomed to eating their pizza at home and away from restaurants, which has been a competitive disadvantage for a chain that was not long ago the world’s largest pizza concept.

The pandemic has only accentuated that disadvantage while giving Pizza Hut all the more incentive to shift those assets. The company’s global unit count declined by 700 over the past year, to 17,842. More than half of the closures were dine-in units, or “Express” locations inside places like transportation centers and in retail shops.

Still, the decline is rare for parent company Yum, which prides itself on global unit growth.

As many as 300 of those closed units belonged to NPC International, the company’s largest operator that filed for Chapter 11 bankruptcy protection in July.

Even factoring in the closed Express units, Pizza Hut’s U.S. same-store sales on takeout and delivery was 17% in the third quarter ended Sept. 30. Company executives said that the brand’s value push, such as its $10 Tastemaker offer of a large pizza with three toppings, helped drive sales in the period.

Still, globally the company is expected to continue closing units in the coming months in a bid to continue its transition from a dine-in to a dine-out concept. Even after the closures, some 36% of those 17,842 global locations are dine-in units.

“We still have a lot of work to do on transitioning the global asset base to off-premise-focused assets,” Turner said.

Turner said that the mix of dine-in locations is expected to “migrate downward over time,” though he said that the full transition “will continue to take some time.”